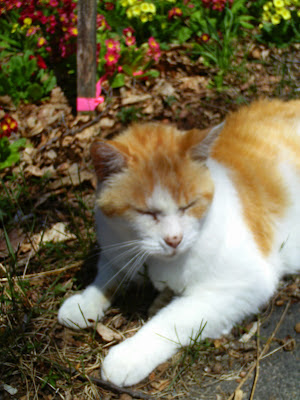 As most of you out there know, today is Father's Day.  The day when we celebrate our dads.

I'm a pretty lucky cat 'cause I actually know who my biological dad is.  Lots of cats out there have never even met their biological fathers.  I've not only met mine but I live with him.  That's right...  I do!  I live with my dad, Jacob, along with the rest of my family.

This fact is especially surprising since I was a feral kitty...  born in the neighbours' wood pile.  But you see, my peeps had seen my dad wandering around the subdivision before I was born.  They suspected he had been abandoned but weren't sure at first.  Eventually, they clued in.  Not before he knocked up my mama though.  Although...  I suppose that's kind of a good thing 'cause...  the result of the whole affair was me!

Once my peeps came to their senses, they invited my dad to come live inside.  He doesn't talk much about those days but the peeps say he couldn't have been a feral kitty as he was pretty easy to get in...  unlike me!  Imagine his surprise that first day when he was popped in a carrier and taken to the doctor for you-know-what.  Yup, he's lucky to have me as a son 'cause there's no more of that of behaviour going on now, if you know what I mean.

Some of you might be wondering how the peeps know for sure that Jacob is my dad.  Well, they're pretty sure he was the only older boy cat wandering around the neighbourhood at that time.  Also, there's the family resemblance.  Personally, I take after my mama with my heart shaped face, but my sister Constance looks a lot like our dad.  They've got the same nose.  Lots of people have said so...  not just my personal peeps.  And although my brother Desdemona was a sterling silver tabby like me, and my dad is orange and white, my sisters are both calico.  I'm pretty sure they get their orange from our dad.  And I do have to admit that around the eyes, my dad and I look a little alike.  So you see, it's pretty much a certainty that we're 'family' family...  if you know what I mean.

But my luck with dads doesn't end there.  Growing up, I sort of had a second dad too.  You see, I had an older brother, Callista.  Yes, yes...  another boy with a girls' name.  Those peeps of mine.  When will they ever learn?  Same old story...  gave him his name before getting close enough to see the important details.  They said, he was a long-legged beauty like a runway model and so they thought he must be a girl.  But you know my peeps...  wrong again!

Anywho...  Callista was a year older than my sibs and me but he was still hanging around with our mama.  They were really close.  He was a mama's boy, all right.  But he was way more than just a pretty face.  He was super nice, too.  Good to us kittens, and everything.  In fact, he helped our mama raise us.  Good thing too, 'cause our real dad was...  I kind of have to say it...  a bit of a dead-beat as far as dads go.  Never lifted a paw to help out our mama.  I remember all this stuff, you know.

When we were younger, there were two really comfy chairs on the veranda.  At first, when we were really little, all four of us babies would cuddle up on those chairs with our mama.  I'm not quite sure how she got us all up there, but she managed.  Probably the ol' scruff of the neck routine.

Then, as we got bigger, we couldn't all fit on one chair with our mama so...  two of us would sleep with our mama on one chair and the other two would sleep with our older brother Callista in the other.  The peeps say it was one of the most adorable things ever.  We did it all the time and they would watch us from inside the living room, oohing and ahhing about the whole pretty picture. 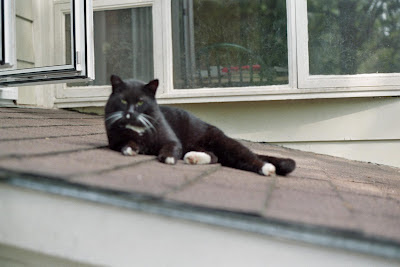 Unfortunately, my brother was even more feral than me.  He never managed to learn to really trust the peeps.  Eventually, he would come into the house to eat and even sleep on a chair or even a bed!  But the peeps were never able to touch him.  If he had the slightest notion someone was gonna touch him he would freak out like you've never seen a cat freak before.  And believe me...  my peeps have seen cats freak.  You remember my Auntie Primrose?  If my brother was sitting on a chair and a peep wanted to get past him, they would have to walk with their back to him so that Kisty knew they weren't gonna try anything funny.  Kisty was very wary of peeps and their ulterior motives and whatnot.

This went on for many years until two years ago, my brother went to Heaven.  The life of a feral kitty is a pretty rough one, you know.  My peeps did their best but Kisty was just never gonna accept being an indoor kitty like me.  But he had food in his tummy and a warm place to sleep at night of which he often did take advantage.  And I'm pretty sure that he knew...  deep down...  that the peeps really loved him...  even if they were peeps!  He was just born to be free, I guess.  Free and a little bit wild...  and one heck of a second dad to my sibs and me.