she doesn't do pills 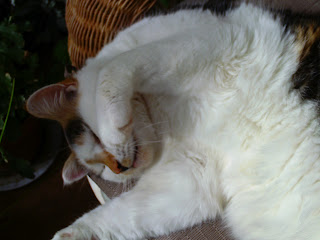 My sister Constance doesn't do pills.  She just doesn't.  Not ever.

Oh sure...  the peep might get one in when Connie is totally unsuspecting.  Like, if my peep were to hide a pill in the palm of her hand and speak all innocent to her.  Say things like, "Oh hi there, Constance" or "Whatcha looking at out that window there, Connie?"  Then, when the peep got close enough, she could grab my sister and pop that pill right down her throat.  If she did all that, she might get a pill in.  A pill...  as in singular...  as in one.

It is possible she might even manage a second one if she can catch her.  You see, after all the trickery and deceit of the first pilling episode, it's not likely Connie is gonna fall for that again.  But if the peep were to sneak up on her while she was sleeping or something, she might stand a chance.  Might...  as in maybe...  as in once in a blue moon that happens to coincide with a full lunar eclipse.  You see, my sister Connie has ESP.  That stands for the skill called Evading Sneaking Peeps.  It's a real skill and my sister has it in spades.

My sister Constance can hide under peep #2's big old writing desk.  No one has ever figured out how she does this.  There's just this teeny-tiny opening at the bottom but Connie manages to wriggle & squiggle her way underneath.  She's not a small girl but the peep says she must be very malleable, or something like that.  I say, she must be magic!  Point is, once Connie gets herself under that desk, she's not coming out from there until she's good and ready.  And usually, she's not good and ready until all danger of any pills are past.

We once had a doctor who couldn't - or wouldn't - believe Connie had ESP.  You should have seen the looks she gave my peeps when they told her Constance wouldn't take pills.  They got the looks, the raised eyebrows, the whole works.  I know, 'cause peep #1 told me all about it.  This doctor just simply would not believe that a cat couldn't be pilled.  Obviously, this doctor didn't know my sister Constance.

The doctor we have now has a totally different attitude.  When the peeps told her about Connie's ESP, she simply said, "Good to know."  Now that's a good attitude, don't you think?  There were no raised eyebrows, no rolling of the eyes into the back of the doctor's skull, or anything like that.  I really like this doctor a lot...  well...  as much as a cat can like a doctor...  if you know what I mean.

Now when Connie has to take pills, the peep plans ahead.

If it's a one-shot deal, like a deworming pill, the peep might try to sneak it into her food.  It has to be Fancy Feast - straight up - in order for this to work.  But to be honest, Connie is really too smart to fall for that...  you know...  with her ESP and all.  The peep has tried more than once and Connie is way ahead on that score.  The peep is better off with her trickery and deceit ploys for the deworming pills.  Of course, if Constance happens to be at her annual check-up or something, the peep with get the doctor to do the pill.  For some strange reason, Connie takes them for her.  Don't know why.  Probably that long plastic pill giver thingy the doctor has.  Or maybe it's the immobilising fear instilled upon Connie simply for being in the doctor's office... 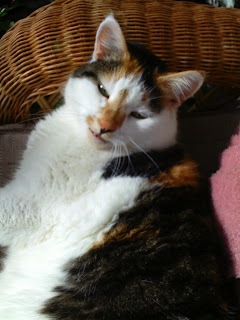 If Constance ever needs multiple pills like antibiotics or something, they go the needle route now.  One shot and she's good for ten days.  Way easier than trying to get ten pills down her throat.  Did I mention that Connie does not take pills?

You know, the peeps take pills every day.  Yup.  They call them vitamins or something silly like that.  I call them pills...  which is what they are.  No need to sugar-coat this stuff.  And the weirdest part is that the peeps take these pills willingly.  Crazy, crazy stuff...  They just pop 'em in their mouths and swig 'em down with some juice or something.  Nuts, I tell you!  Never seen anything like it.  But then, peeps are a little nuts, aren't they?  Yup... crazy like a squirrel making nut pies.  Oh yeah...  and I've seen the peep do that, too.  She calls it Pecan Pie.  I call it nuts!  But I'm willing to take a little of the whipped cream off her hands for her, if you know what I mean.  Least I can do for my crazy peep, I think.  Yup, the least I can do.

Posted by Seville at Nerissa's Life at 11:13