So peep #1 comes back from getting the mail Monday toting a parcel.  But I have to tell you, I'm not sure how I feel about this particular parcel.

Secondly, on the front of the parcel, was a name...  and it wasn't Nerissa!  Could you believe it?  You'd think that with my having this blog and all, once in a while, someone might send a parcel to me!  But oh no...  this parcel - as usual - was for the peep.  Had her name on the front of it and everything.  Strike number two.

Thirdly, when the peep opened up her parcel...  her padded envelope - yeah, envelope as in not a box - out came a book.  The peep was all excited and whatnot.  She didn't jump up in the air and do a three-sixty before landing, like I do when I'm really excited, but I could tell she was pretty pleased to receive this particular book.  You might even say she was pleased as punch.  Nip punch, perhaps. 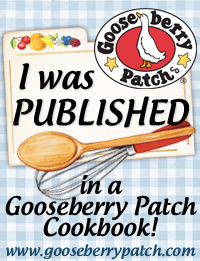 Okay, I have to admit.  It's a really pretty cookbook and all.  It's called The Christmas Table, or something like that.  I'm all for Christmas so at least it has a good theme.  I've got to give credit where credit is due, you know.  But I've got bigger issues than this weighing upon my pretty little sterling silver tabby shoulders.  Do cats have shoulders?  Hmmm....  don't know the answer to that one.

Anywho, the next thing is that I'm hearing all about how in this The Christmas Table cookbook there is not one, but two of the peep's recipes.  For crying out loud!  I'm probably gonna be hearing about this for a mouse's age.  Life isn't fair, you know?  It really isn't.  And just to add insult to injury - and I'm pretty sure the peep did this on purpose, the recipes are for veggies!  That's right, not an ounce of meat in either one.  Nothing to interest a cat whatsoever.  One recipe is for Mushroom Pizza and the other is for some kind of Mediterranean Soup.  No chicken, no beef, no fish...  no nothing...  I bet they both have onions in them, though.  Yeah, the peep just loves cooking with those onions.  CATS CAN'T EAT ONIONS!  They would make me sick!  Does the peep never think about me in these matters?  Apparently not.

Oh, and one final little issue...  no, it's a big issue, I think.  Just who in the mouses does this peep o' mine think she is?  I'm the author in this family!  I'm the one with the award-winning blog and all.  Sure, she's published a few short stories and whatnot but she still hasn't finished that stupid old mystery of hers.  Haven't seen it published or anything...  unlike my blog which I manage to publish twice a week...  EVERY WEEK!  Hmmph!  She's trying to hone in on my territory, I think.  And you know how we cats feel about our territories.  I'm gonna have to do something about this.  Gonna have to do something mighty quick.

Posted by Seville at Nerissa's Life at 09:50