It's hard to believe, but nine years ago today, I was born.  Many of you know how I was a feral kitty and you're probably wondering how my peeps know that today of all days is my birthday.  Well,  you see...  my mama was out and about in the neighbourhood.  She wasn't feral like me.  She had been abandoned but she was kind of nervous and the peeps couldn't catch her at the time.  The fact that she was preggers was pretty obvious, the peeps say.  Well, no wonder...  she had four of us kitties in her belly and that's a lot of kitty!  So anyway, one day she was very obviously preggers...  and the next day she wasn't.  The peeps took one look at the slimmed down mama and knew that we had been born. 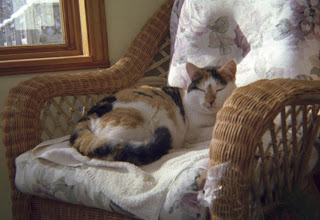 A couple weeks later, a neighbour mentioned how she thought there were baby kitties living in her wood pile.  That would have been us.  So then my peeps knew not only when we had been born but where, too.  Quite a bit of information for feral kitties, huh?

When we were about four weeks old, my mama brought us to the peeps' veranda.  That's where they had been feeding her and I guess she figured it was a fairly decent restaurant.  Plus, there were a couple of chairs on the veranda with soft cushions.  An added attraction to any restaurant, I should think.  And just like some of those family friendly restaurants I see advertised on the television, there was a play area.  There were big planters filled with lots and lots of soil.  Yeah, there were some plants in there too but we made quick work of them.  Oohhh...  those were the days. 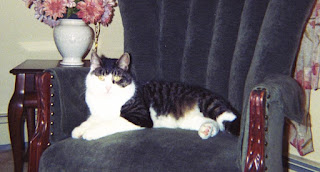 The peeps were really lucky 'cause peep #1 just happened to look out the front door when my mama arrived with the first baby.  Then, they watched as one by one, she carried each of us, by the scruff of our necks, to the veranda.  I've heard this story so many times, I can tell it in my sleep.  They saw the first baby and went all, "ooh" and "aah" seeing how cute I was.  Yeah, it was me.  Then, they saw baby number two arrive and there were more "oohs" and "aahs" 'cause my brother Desdemona was a cutie pie, too.  Then their eyes got all big and peep #1 said, "Look, there are three!"  That would have been Constance.  Finally, at the sight of Beatrice, peep #2 said, "Oh my!  There are four!  What are we gonna do?"

What are you gonna do?  Well that was pretty obvious.  Obviously, you're gonna have four more kitties livin' at your house.  I mean, really!  What did they think they were gonna do? 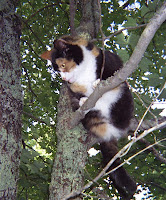 But back to today...   We're having a party!  It's just gonna be me and my fur family and the two peeps. There will be treats and nip.  Special eats like Fancy Feast and I happen to know the peeps bought real chicken breast for us - something we never get 'cause those peeps of mine are veggies.  And, there will be lots of  play time and since the weather is really nice today I'm sure some of it will be outside.  Sun puddles galore.  And best of all, my very favourite television show, The Big Bang Theory, is on for two whole hours on Sundays so...  there's gonna be major cuddling going on tonight.  Constance, Beatrice & I have reserved the couch with the peeps for the entire evening.  Lots & lots of tummy rubs are in store for us.

Posted by Seville at Nerissa's Life at 10:02