excuse me... we don't need that branch 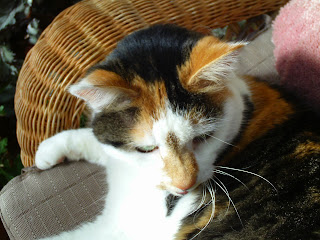 So a couple of weeks ago, I was sitting at my computer with the peep, working on my blog - yes, we won't get into just who was doing what 'cause most of you wouldn't believe me if I told you - when the peep noticed this guy walking past my house.  She went like, "what's this about?" which, of course, made me look up from my work.

That's when I saw this man walking down my street dragging a big ol' pine branch from what must have been a big ol' pine tree.  There he was...  dragging it down the middle of the road past my house.

I recognised the man at once 'cause of his hat.  He doesn't live on my street but I see him walking all the time.  He walks around the whole subdivision, always wearing that same hat.  I had never seen him dragging a branch before, though.  Very odd, I thought.

Behind my house, there's this big old wooded area.  People used to dump stuff back there all the time.  I often saw cars with wagons attached to them, driving down the dirt road.  In the wagons would be branches and leaves and all sorts of things.  Some maybe okay to dump and some maybe not.  Luckily, people can't do that anymore 'cause the man who owns that property put up a big metal gate.  Very wise, I think.  But you know...  the gate doesn't stop people or kitties from walking down there which is good 'cause I've been known to walk down there myself a time or two.  I've never dumped anything - and neither has the peep - but I suppose people could still do that if they carried - or dragged - whatever it was they wanted to dump, around the metal gate.

Anyway...  back to the guy in the hat.  I thought this whole branch thing was kind of weird but then...  when I saw what I saw...  weird turned into just plain old rude.  The man in the hat was just on the other side of some of my trees and probably thought no one could see him but that was silly 'cause the trees have very few leaves at this time of year and the peep and I could see him as plain as day.   Anyway, when he thought no one was looking, he took that big ol' branch and threw it into my yard.  I thought to myself, "MOUSES!"  Actually, I thought it out loud.  It came out more like a "meeeoooowwww!!!" but the peep knew exactly what I meant.

I wanted to say to this man in the hat, "excuse me...  we don't need that branch."  And we didn't.  We've got lots and lots of branches of our own.  We don't need any belonging to anybody else!  In fact, I wouldn't mind if the peep got rid of some of ours.  Some of those young saplings she took out when she got all lumber-jack peep on me last summer to make room for more primroses.  Hoping this summer she will.  No, she won't dump 'em anywhere.  Not even in the wooded area behind our house 'cause she and I have always disapproved of that kind of  behaviour.  That would be rude.  Oh so terribly rude.