First thing Monday morning, peep #2 called the doctor's office.  The call was made in the kitchen while my dad was 'asleep' on the couch in the family room...  within earshot.  Silly peep. 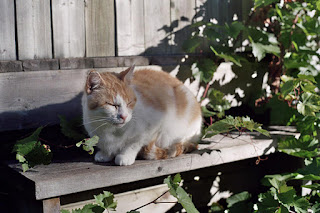 Around two-thirty that afternoon, the peeps went a-lookin' for Beatrice and my dad.  Peep #1 popped Beatrice into her carrier but there was no sign of my dad.  She looked everywhere.  She looked upstairs and downstairs.  In closets and under beds.  She went outside to look.  She looked both high and low.  She looked up on the roof - don't laugh...  we cats have all been up on the roof of our house many a time - and she looked under the deck.  She walked around the house...  TWICE!  I watched her from a window.  That peep looked awfully silly out there calling, "Jacob!  Jacob!!  Jacob!!!"  Of course, my dad did not reply.

Finally, the peep gave it up.  There was nothing left to do but just take Beatrice to the doctor.  The peeps put Bea in the car and drove off.

An hour or two later, the peeps arrived home with my sister.  That's when they spotted my dad, sound asleep on the couch in the family room.  He was curled up next to Tobias, without a care in the world.  What can I say?  That's my dad!

What happened next was totally unexpected.  Peep #1 grabbed my dad, popped him in a carrier and took him to the doctor!  Usually, we get away with this kind of thing.  My sister Constance has avoided the doctor for an entire year!  But my dad had made the mistake of appearing before the doctor's office closed for the day.  There was still time to get him in.  He needs a doctor-avoidance tutorial from Constance.  My poor dad.
Posted by Seville at Nerissa's Life at 23:13