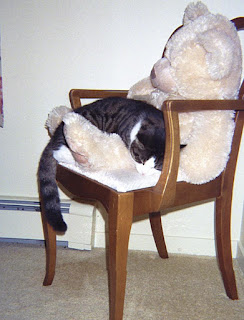 Remember when I told you about my peep #1 and her singing?  Well, it's over now.  At least for a bit.  Saturday night was the night of the concert so she doesn't have to do any more caterwauling in preparation.  Did I say caterwauling?  I should probably have said practising.  But hey, if the paw fits...

I don't really like it when my peep goes off to her rehearsals or concerts.  I suppose it's better than if she were to do it at home.  My ears can only take so much, you know.  I think I've told you how sensitive they are.  But seriously, I don't really like it when she goes off anywhere.  I like my peeps home...  where I can keep an eye on them...  and where they will be readily available to oblige me by fulfilling any needs I might have at a moment's notice.  You know the sort of thing...  fresh water, food, treats, tummy tickles, behind the ears tickles, etc...   The list goes on and on.

So, a few hours before she had to leave for her public caterwauling, peep #1 made the mistake of sitting on the couch in the family room.  I spotted her there and hopped right up beside her.  I then, proceeded to ingratiate myself upon her lap.  She can't really resist that.  It's always good for a behind the ears tickle.  Then I gave her my best soulful look with my eyes.  The look that says, "you wouldn't think of disturbing me now, would you?"  Then, for the piece de resistance, I slowly closed my eyes, sighed, began to purr loudly (which, let me tell you, sounds a heck of a lot better than her singing) and pretended to fall asleep.  Surely, after all that, my peep would never dream of getting up off the couch and leaving me home alone.

Well, it didn't work.  She got up.  Disturbed me and everything.  What nerve!  I've got to get myself some new peeps.  The thing is, they're so hard to train.  I've sort of broken these two in but...  let's just say there's work to be done.  Anyone out there got a good peep training handbook?
Posted by Seville at Nerissa's Life at 20:38