not a good idea 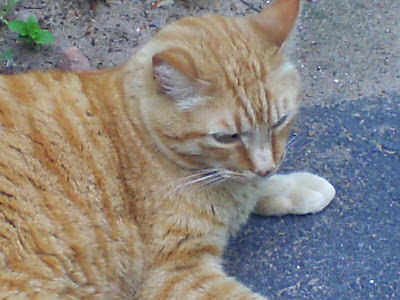 Way to go, Saffy.  You've really gone and done it this time.

You know somethin', Saffy, my man?  I do believe you're right.  It IS the peeps' own fault.  Yup, it really and truly is.  She should've known better, you know?  Oh yeah, she definitely should've known better.  And in fact, I bet she did know better but went and did what she did anyway, so it was like she was encouraging you to...

Hold on a sec, Saffron.  My readers out there wanna know what's goin' on.  Best I stop and tell 'em, don't you think? 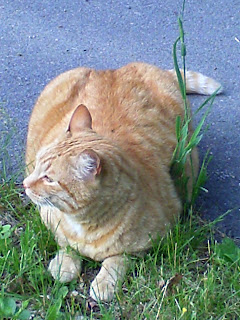 So anyway, it's like this: Peepers went and bought a new pair of earrings as a Christmas treat for herself.  Personally, I prefer treats you eat, but peeps are peeps and apparently they don't know what makes for a good treat.

But anyway, this non-edible treat is a Christmas treat 'cause the earrings are Christmas earrings, or so I'm told.  Little enamelled penguins, each wearin' a Santa hat with a sparklin' diamond instead of a pompom at its tip.

Okay, so the sparklin' diamonds aren't really diamonds.  I'm pretty sure they're just a couple of chunks of glass.  But the earrings were cheap, so what do you expect?

So anyway, the cheap earrings are actually kinda cute.  Not tacky or anythin' like that.  They're cute as in...  Well...  Cute.

Oh sure, they'd be a whole lot cuter if they were little enamelled marmalade cats that looked like me; but since they're Christmas earrings, penguins are probably more appropriate, I suppose.  What with penguins likin' snow and snowy surroundings and stuff.

So anyway, the cute and cheap earrings dangle.  Yup, they dangle from her ears.  From Peepers' ears, you see. 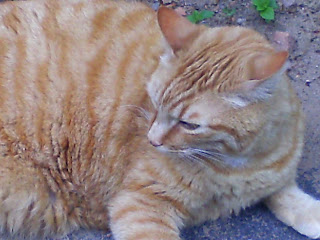 Excuse me, my friends.  I need to go console the peep.  Saffy has been whackin' those earrings tryin' to play with 'em 'cause they're danglin' from Peepers' ears like they're toys - on account of their kinda lookin' like toys, what with their danglin' like that - and he's been whacking 'em with his claws out, and...

Gosh darn it, Saffron.  I TOLD you that wasn't a good idea.

Posted by Seville at Nerissa's Life at 15:41