Of all the no-good, moused-up, stupid things to do.

Of all the no-good, moused-up, nonsensical rules to make.

Peepers, what do you MEAN I don't get to vote in tomorrow's Federal Election?  WHAT DO YOU MEAN?

THAT'S NOT TRUE, and I know that for a fact.  I know for a FACT that one can register at the polls ON ELECTION DAY.  For a fact, I tell you.  For a fact!  I read it on the Internet and everythin'.

"You have a point, Seville, but in order to register at the polls, you have to have photo ID."

THAT'S NOT TRUE, and I know that for a fact.  I know for a FACT that one can vote WITHOUT photo ID.  For a fact, I tell you.  For a fact!  I read it on the Internet and everythin'.

Don't look at me like that, Peepers.  It's true.  You can vote usin' all sorts of ID, and none of it has to have your picture.  Oh sure, by usin' a drivers license or somethin' like that, it might be a little easier.  You know, on account of your name, address, and picture bein' right there all in one spot, for the Deputy Returning Officer to see.

Of course, no Deputy Returnin' Officer in his or her right mind would ever wanna see the picture on YOUR drivers license, Peepers.  I've seen that picture and uh...  Well...  Well let's just say; Your village called.  They're lookin' for their idiot.

But back to this business 'bout photo ID.  If a prospective voter doesn't wanna show anyone the picture on their drivers license makin' them look like the local village idiot like your drivers license makes you look, Peepers, they can use two other forms of ID.  Yup, they can, as long as both pieces have the voter's name on 'em, and one has the voter's address, too.

The peep narrowed her eyes and looked me up and down before speaking.  "And exactly what kind of ID do YOU have, Seville?"

I have my vaccination records.  I have my rabies tag, too.  Now the tag doesn't actually have my name or address on it, but its accompanying paperwork does, and...

Don't you roll your eyes at me, Peepers.  Fact is, I HAVE ID.

"Seville, I don't think a rabies tag is an acceptable form of ID."

Well it darn well should be.  If more peeps got their rabies shots like we cats do, there'd be fewer cases of werewolf sightings and the like on Hallowe'en.

Okay, so maybe not,  'Cause you know, that's not how werewolves are made.

Paw me over that list you have there, Peepers.  Let me see what kinda acceptable ID I, Seville the Cat, might have.

But I need one more.  Hmmm...  Proof of vehicle ownership, tax assessment, credit card...  Debit card, a residential lease or sub-let, a letter from a shelter or soup kitchen...

Oohhh...  PEEPERS!  Says here, a letter from a shelter will suffice.   You volunteer for a...

So not an animal shelter, then.

And what about this blood donor card thingy?  If I were to donate blood for kitties havin' surgery...

Has to be people blood, you say?  Well I suppose I could donate some of yours.  Paw me over your arm, and...

Mouses, Peepers, you're in a foul mood today.  And if ANYONE has a right to be feelin' foul, it's me.  My gosh, there are about fifty different forms of acceptable ID on this here list that one can use to vote, and I have only one.

Peepers, I'm beginning to think the reason I don't get to vote on Monday October 21st, 2019 is because I'm a cat.

Gosh darn it, that's speciesism, that is.  It's a bias in favour of the interests of humans.

And me, a WORLD-RENOWNED blogging kitty, too.

Well, even if I'm not gonna get to vote this year, that shouldn't stop others from doin' so. 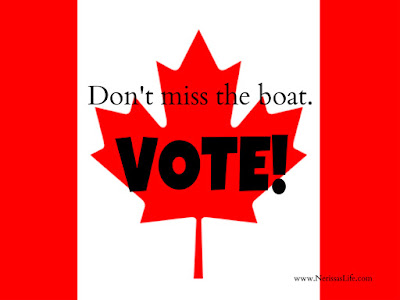 If you're eighteen-years-old or older, a Canadian citizen, and - APPARENTLY - a human, YOU GET TO VOTE in the 2019 Federal Election.  This is your opportunity to use your voice.  To speak up and be heard!  Don't take your right to vote for granted.  We cats aren't as fortunate as you.  We cats aren't allowed to vote.

Posted by Seville at Nerissa's Life at 15:53