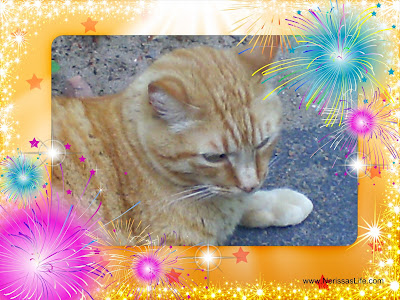 "He went thataway, Peepers," and I motioned with a flick of my tail.

I NEED YOU TO HOLD ONTO THOSE HORSES, for sure.

Although there were some similarities, to be sure.

Andy had another appointment with the doctor, you see.  Dr. T. needed to check on his teeth.  She needed to see if the abscess was all gone, and to figure out if there was a tooth needin' to be...  Well...  Removed.

So picture it: Andy was upstairs on a bed, quietly mindin' his own business, when Peep #1 entered the room with a harness tucked into her pocket.

AND HE WAS OFF!

Oh those two had a FUN time runnin' around the house.  They went down two flights of stairs, all the way down to the basement, then back up into the kitchen, spent some time under the kitchen table, then back down to the basement behind the freezer, and then...  Well it was about then when Andy remembered that if you hide under the stairwell, way WAY at the back, where there are no lights at all, peeps won't crawl in there to get you. 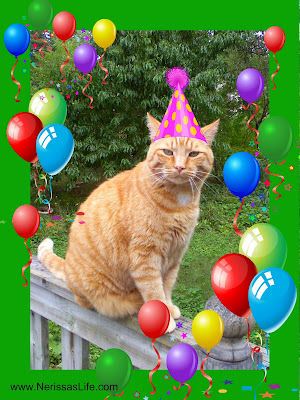 So the appointment on the 22nd of December...  Well..  Well it had to be cancelled, for sure.

Once again, Andy was upstairs on a bed when the peep sauntered up to the second floor.  "Hum-dee-dum-dee-dum," she sang.  If you can call that noise singin', that is.  "Where-oh-where is the toilet paper?" she asked, before openin' the hall closet to look for it in there.

Apparently not findin'' any toilet paper in the closet - EVEN THOUGH THERE WAS A WHOLE BIG BAG OF IT SITTIN' THERE WAITIN' TO BE SHREDDED - she made her way into the bedroom.  "Hum-dee-dum-dee-dum," she sang again.  "Where-oh-where is the... Uh...  Hmmm..."

Lookin' as innocent as possible, the peep made her way over to the dressing table.  She reached out to lift somethin' up, then SPUN on her heels AND MADE A GRAB FOR ANDY, who was still lyin' on the bed.

Down the stairs the two went with Andy in the lead, and Peep #1 close on his tail.   Andy swung to his right to head down into the basement, only to find...

MOUSES!  Thwarted.  The door to the basement was closed.

Good thinkin' there, Peepers.  Always good to be prepared.

Then into the family room they went, where Andy crouched down, low, and gave the peep a good ol' meow.

Peep #1 approached, speakin' softly to him, pretendin' she wasn't intent on grabbin' him the first opportunity she got.

My gosh, how dumb does the peep think Andy is?  Andy's not gonna fall for that.  Andy...

Then the harness was strapped on and off the two went to see Dr. T.  And that, my friends, was that.

'Cause Andy, apparently, has some tartar formin' on his teeth.  And do you know what?

HE HAS TO USE MOUTHWASH NOW.

On the other paw, I probably shouldn't laugh.  This could be a good thing.  Maybe it can deal with that stinky ol' fish breath of his. 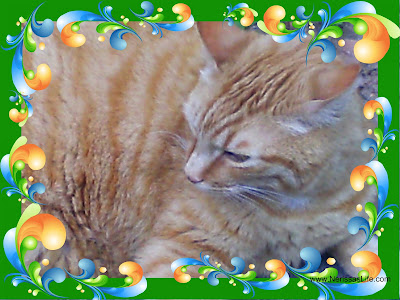 But imagine a cat havin' to use mouthwash.  Oh sure, it's perfectly edible stuff.  Perfectly safe for cats, I'm told.  Not sure on the taste, mind you.  The peep asked the doctor but alas, the doctor has not tasted it, herself.  And Andy isn't tellin' me if he likes how it tastes or not.  He's still annoyed 'bout havin' his mouth pried open and mouthwash squirted inside, while I...

While I, Seville the Cat, am sittin' back with my paws up, enjoyin' the show.

MOUSES!
Posted by Seville at Nerissa's Life at 17:13

Email ThisBlogThis!Share to TwitterShare to FacebookShare to Pinterest
Labels: antics of getting a cat to the vet, cats, dental appointment, humor, humour, mouthwash, veterinarian, veterinary care