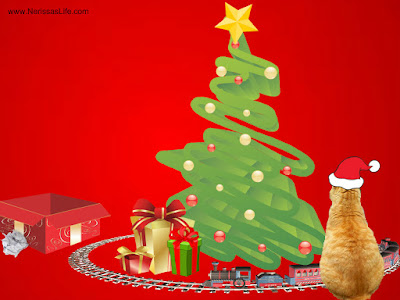 "Ho-Ho!  Look at this, Mason.  Peep #1 set up a Christmas village for us, right here in the livin' room.  This is gonna be super fun, for sure."

Mason narrowed her eyes.  "I doubt she put it up for us, Seville.  The peeps usually discourage us from playing with the Christmas decorations."

"Yeah, yeah...  But I never pay any attention to 'em when they do that," Seville explained to his sister.  "They say No and I say, What-was-that-you-said-again? or somethin' like that.  Personally, I don't even bother pretending to listen when they scold us, anymore.  The peep and I have come to an understandin'."

"Oh yeah," Seville nodded.  "I no longer pretend to listen, and the peep no longer expects me to pretend.  Or to listen.  Or any variation, thereof.  And do you know what?  Our understandin' appears to be workin', for sure."

"I think you're a little big for that particular train, Sivvers," said Mason, shaking her head.  "That is, even if it did go all the way to the North Pole, and not just around and around AND AROUND the Christmas tree, right here in our living room."

"But it DOES go to the North Pole," Seville insisted.  "I saw 'em sortin' mail in the mail car, and all the mail that was bein' sorted was addressed to Santa Claus!" and he stomped a paw for emphasis.

"I am not nipped.  Well, no more nipped than usual, that is.  And I DID TOO see 'em sortin' mail in the mail car.  Look," and he grabbed his sister by the tail.  Watch as the train passes again.  Look in the third car from the back.  You'll see a postmaster and two elves, going through bags and bags of mail, and..."

"Well look at that," Mason whistled.  "I wonder how Peep #1 got those miniature animated toys inside that train.  The detail is really quite amazing."

"Detail, shmetail.  Those aren't toys.  Those are real, live elves and a postman in there.  They're miniature on account of needin' to fit inside the train, I suspect.  Probably usin' the same magic Santa uses when he has to fit himself down chimneys and stuff on Christmas Eve."

Wistfully, Seville watched the train pass him once more.  "THIS HERE TRAIN travels to the North Pole, for sure, Mason.  I can feel it in my whiskers," and he smiled, knowingly.

"Whatever you say," and Mason turned on her tail.  "Let me know if you figure out how to fit your big cat self into that teeny tiny train, okay?  I'll be in the kitchen, looking for treats."

"Will do!" Seville called, waving his sister off.  "Hmmm...  Now exactly how does one miniaturize oneself to fit inside a miniature train headin' for the North Pole?  HMMM..."

Mason returned a little while later with a bag of treats in her paw.  "Want some?" she asked her brother.

"I'm too busy thinkin' to be eatin' treats," Seville answered.  "Besides, I've come to the conclusion that in order to fit inside this here train, I might need to reduce my daily treat consumption." 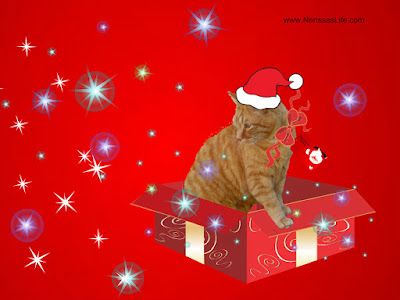 Mason stared at her brother, not quite sure how to respond.

"I'VE GOT IT!" Seville yelled.  "I know how to get myself into that train."

"This should be good," his sister chuckled.

"Oh ye of little faith," and Seville dashed out of the living room.  Moments later, he returned with a gift tag and magic marker.  Using the marker, he wrote Santa's address, which thankfully, he knew by heart, on the gift tag.  He then took some ribbon from a gift under the tree, and used it to tie the tag around his neck.  "Wait and see, Mason.  Just WAIT AND SEE."

Seville and Mason sat quietly, watching the train as it approached.

Seville and Mason sat quietly, watching the train as it passed, leaving them both behind.

Mason yawned.  "Let me know when you figure this out, huh?  I'm going back to the kitchen to score another bag of treats," and with that, she turned on her tail and left the room once more.

"Awww...  MOUSES!"  Seville whimpered before sitting down, looking rather dejected.  "I thought that was gonna work, for sure."  He distractedly pawed at a large decorative box under the tree.  "This must be one of the boxes Peep #1 uses to store the tree decorations and stuff when it's not Christmas time," he murmured.  He lifted the lid.  "Yup, there's a whole bunch of crumpled up tissue paper in here.  Probably the paper she wraps the glass ornaments in."

Seville watched as the train chugged its way around the tree once more.  "Guess I'm not gettin' to visit Santa today," he sighed.  "Maybe I'll go check out the treat situation in the kitchen," and he stood to leave.  "On the other paw, maybe I'll have a nice little nap in this here storage box.  Silly to let a good box like this go to waste.  It's even filled with tissue paper.  I love tissue paper.  Comfy for lyin' on AND fun for shreddin', too," and he hopped into the box.

"OUCH!"  With a paw, Seville dug around under the tissue.  Finding the solid object he had landed upon, he pulled it out for examination.  "What the mouses is this?" he asked himself, holding up a glass jar.  "It's not an ornament.  At least I don't think it is.  But there's something sparkly inside.  Looks kinda like a jar full of glitter."

Unscrewing the lid, Seville held his nose to the jar's opening to get a whiff of what was inside, on the off chance it might be some new form of glittery catnip.

As the glitter fell to the floor, it danced in the air.  Then it began to swirl around and around, and before Seville knew it, the glitter had encircled him within a cloud of sparkling, flashing lights.

Dazed, and more than a little tingly, Seville got to his paws.  Looking up, he met the kind face of a stranger who looked vaguely familiar.  He shook his head to clear it, and looked around.  No longer in the storage box under the Christmas tree, the cat found himself in a train car, with a postman and two elves, who were all very busy sorting mail.

"Mail arrival!" cried one of the elves, looking directly at Seville.  The elf grabbed hold of the gift tag tied around Seville's neck.  "Addressed to Santa, he is," said the elf.  He groaned as he tried to pick Seville up.  "The cat must weigh close to twenty pounds!"

"I. DO. NOT." Seville stated, emphatically.

The elf attempted to lift Seville again.  Getting him off the ground, this time, he staggered backwards.  He tried to regain his balance but it was too late, and before anyone knew it, the elf was on the train car floor, with Seville standing on top of him. 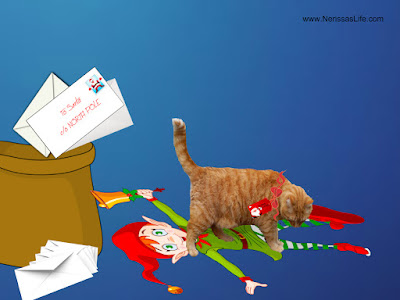 Seville scowled at the elf.  "Stupid elf," he muttered.  "I'm only sixteen pounds.  Maybe - just maybe - sixteen and a half.  But twenty?  MOUSES!"

"Get off me you big marmalade oaf!" the elf wheezed, clearly in distress.

But at that moment, Seville was far too busy looking about the train car to pay any attention to the elf beneath him, gasping for air.  "Ooh-boy," Seville whistled.  "That there jar wasn't filled with glitter.  I'm thinkin' it must have been some kinda magical magic dust, for sure.  MOUSES!"


Be sure to return to Nerissa's Life, the blog, on Sunday December 17th,
for the conclusion of my excitin' Christmas adventure.
PURRS.

Posted by Seville at Nerissa's Life at 18:45