I sniffed the....  THING lyin' before me. What could it possibly be?

I sniffed it again.  *sniff sniff*

It wasn't a nip mouse, and that was for sure.  For starters, it contained no trace of sniffable nip.  What's more, it did not look like a mouse.

Could it be a nip thing?

Nah, even a nip thing would have to contain nip.  MOUSES!

Nope, the thing was not mitten-like.  Not mitten-like at all.  It didn't look like any mitten I had ever before seen.

On the other paw, it did kind of look like the claw of a lobster.  "Do lobsters wear mittens?" I thought to myself.  Nah, lobsters don't wear mittens.  They live in the ocean and everyone knows wet mittens get all soggy and cold.  And even if they didn't, no self-respectin' lobster would ever wear a mitten lookin' like that.  MOUSES!

And why...  Why had the thing sprouted a wart?

It was true.  On one side of the thing, there was a lumpy ol' lump.  A lump that looked wart-like, for sure.

But in all honesty, the whole thing in question looked like it had been partially chewed up by a deep-sea monster, before bein' spat out like the seeds of a melon.

Sittin' back on my haunches, I had a good think.  What did I know?  What evidence did I actually have?  If I thought it through carefully, surely I could identify the identity of the thing.

Okay, so it was made out of yarn.  That much I knew.

And as I had found it in the peep's knittin' bag, I was certain she was responsible for knittin' the atrocity, for sure.

A nip mouse, it was not.  A nip thing, neither.  A knitted cover for a lobster's claw was still a consideration, although highly unlikely.

Although I had already excluded the possibility of it bein' a mitten, I remembered Peep #1 workin' with some black yarn and a pattern for mittens.

"Hey Peepers!" I cried.  "Is this here knitted atrocity of a thing, your audition piece for the Great Canadian Knittin' Show?  Is it actually supposed to be...  A MITTEN?  MOUSES!"

I looked at the thing lyin' before me, again.  I rubbed my eyes with a paw.  I gave my head a good shake. I spun 'round three times, before curling up into a ball, tucking my head next to my tummy, and squeezing my eyes tight for, my friends, there are some things a kitty can never unsee.  MOUSES!

I unfurled myself and rose to my paws.  Circling the thing lyin' there on the floor, I reached out with a paw, and gave it tap.

Clearly, whatever it was, it was dead.  Further evidence of the thing bein' a knitted thing of the peep's.

But it looked like no mitten I had ever before seen.  I mean, what was that other thing on the knitted thing's side?

No, not the wart.  The thing on the thing's OTHER side.

The thumb, you ask?  Ask well you might, but no peep - ever - has had a thumb that size.  Why, it had to be half the width of the wrist, for sure.  MOUSES!

"Hey Peepers!" I cried.  "Is this here knitted atrocity of a thing, a mitten for mutant peeps?"

"Or perhaps for aliens?"

Now that sounded unrealistic even to me.

I scratched behind my ear with a paw.

And how was this Great Canadian Knittin' Show gonna work, anyway?  A knock-off from a knock-off, for sure.  But what I was questionin' was the logistics of it all.

Whippin' up some cakes and pastries in a weekend was fine for bakin' shows, and sewin' up a little outfit in a day was fine for a sewin' bee, but knittin'?  I mean, knittin' takes time. 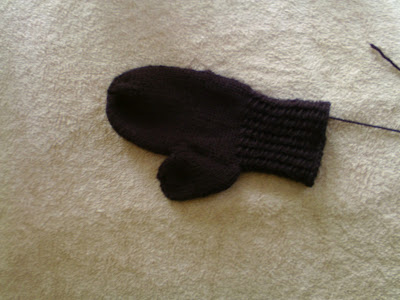 Saturday mornin', the contestants all start knittin' a sweater.  By that evenin', they've finished a sleeve.  Eleven million years later, the projects are ready for judging. MOUSES!

Maybe that was why the project at paw was simply a mitten.

A mitten with a super-sized thumb.

Posted by Seville at Nerissa's Life at 19:31