out of the batter bowl 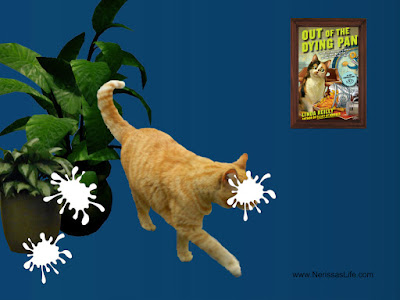 "LOOK OUT!" Rushton yelled as Seville walked past the kitchen door. Seville turned in the direction of his brother's voice just in time to receive a paw-full of goopy, gooey, pasty batter in his face.

"Sorry about that," Anderson apologized, padding over to Seville.  He wiped what batter he could from Seville's face with a paw.  Drawing the paw to his mouth, he sniffed.  Then he licked it and screwed up his face. "Tastes good, Rushy, but you were right.  It is kind of lumpy."

Seville looked from Anderson to Rushton and then back to Andy once again.  "I'll ask once more. What the mouses are you two up to?  Whose idea was this here food fight, anyway?  I thought you were working on your book reports for Kitty Lit. 101!  You know, your reports about Linda Reilly's latest book, Out of the Dying Pan."

"We were.  I mean, we are," Rushton answered, rather matter of factly.

"It's true, Seville," piped up Andy.  "We're doing what one calls a reenactment of one of the scenes in the book.  Checking out how realistic it is and stuff."

"Turns out the scene was very realistic," added Rushton.  "I can totally see something like that escalating to flying batter and things, just like in the book.  Andy and I proved it and everything."

Seville rolled his eyes before saying, "When Peep #1 finds out about this..."

"Oh she already knows," explained Andy.  "Said something about us driving her crazy which is absolutely ridiculous as neither one of us can drive."

Seville pursed his lips, partially closed his eyes allowing them to glaze over, and shuddered.

"You okay there, bro?" Andy asked.  Without waiting for a response he continued with, "So anyway, now that we've proven that the book's batter scene in the kitchen really could happen..."

"Which we already knew but simply felt the need to prove," added Rushton. 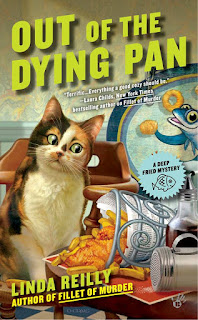 "Now we can go type up our reports for Professor Lyon," finished Anderson.  "You have yours done already, Seville?"

"Had mine done ages ago and it's a good thing, too, 'cause I'm looking at this kitchen and thinkin' that SOMEONE is gonna have to do a little cleaning."

"I think Peep #1 will clean it up when she gets back from crazy, wherever that is," said Andy.

Rushton stared at Seville for a moment before asking, "Don't you want to know why we needed to do this reenactment, Seville?"

"Sure you do.  Don't you think Seville wants to know, Andy? Don't answer that, Anderson.  It was what one calls a rhetorical question," and Rushton settled back on his haunches before continuing.  "Anyway, Andy and I were discussing the various relationships in Linda Reilly's latest book, Out of the Dying Pan.  The various relationships between the characters and stuff."

"And by stuff," Anderson butted in, "he means food.  Deep fried food like fish as, as you know, the main character Talia owns and operates a restaurant serving such things.  Things like fish.  And meatballs too!"  Anderson turned to Rushton to add, "We need to try making those Deep Fried Meatballs, Rushy.  Recipe is in the back of the book."

"As I was saying," Rushton scowled at his brother, "the book has a lot of relationships.  Some fairly simple and others far more complex.  Relationships between the various characters and..."

Seville sat down, closed his eyes, and lay his head in his paws.  "I can't believe these two cats are my brothers," he muttered.  "Clearly, they were adopted."

"Andy does have a point about the scarves," Rushton agreed.  "There are two scarves.  The smoky smelly one that Martha is always wearing and then the.. uh..  the murder weapon.  You know, the one Talia made for her grandmother."

"Which is another relationship," Anderson said.  "You know, the relationship Talia had with her grandmother when she was growing up.  How she loved her and made her that lovely scarf as a gift..."

"Which then showed up with the victim, before the victim was an actual victim," continued Rushton. "That has got to make one wonder if there was a relationship between the victim and Talia, right?  Might even make the police look at Talia as the killer." 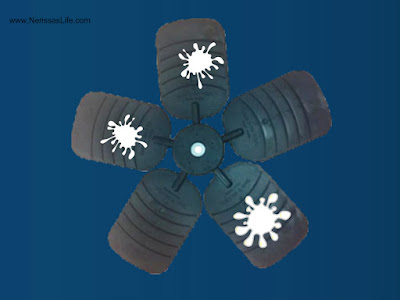 "Excuse me," Seville interjected, "but can someone please explain what all of this has to do with your whipping up a batch of batter and having a food fight in the kitchen?  Anyone? Anyone at all?"

"Um..." and Rushton looked upwards at the ceiling.  "Oh wow.  Look at that.  Which one of us threw batter all the way up there?  It hit the fan and everything."

Anderson looked down at a paw and began to study a claw with great concentration.

Rushton scratched behind an ear.  "Well we really just wanted to see what being in a food fight would be like as neither one of us had ever been in one before.  Ours went a little further..."

Andy tapped Rushton on a shoulder.  "Actually, ours went a lot further than the one in the book.  No batter hit the ceiling in Out of the Dying Pan."

"True," Rushton nodded in agreement.  "But at the time, it seemed like a good experience to have. And you have to admit, Seville, that the characters involved in the smaller and..."  He gazed about the kitchen.  "...and not nearly so messy incident in the book did all share relationships both to Talia and to one another and..."

"THERE WERE NO FOOD FIGHTS IN THE BOOK!" Seville hollered.

"But there was that scene involving some arguing and batter and some of the batter did end up on someone's shoe."

"No, there were no mice Seville," Andy frowned.

Seville slapped a paw to his mouth.  "Tell me you didn't..."

"Tell me you didn't go and get your lumpy batter on that extra-special, super-duper autographed copy of Out of the Dying Pan that Linda Reilly offered to GIVE AWAY to one of the readers of my blog.  Where is it?  Andy?  Rushy?" and Seville looked frantically around the kitchen.  "With all this batter flying about...  WE CAN'T GIVE AWAY A DAMAGED COPY!"

"Don't be ridiculous," chastised Rushton.  "We wouldn't do a thing like that.  The autographed copy of Out of the Dying Pan is tucked safely away, where it will remain until your blog's GIVEAWAY is over and someone wins it.  We would never let it get damaged in our little food fight.  NEVER." 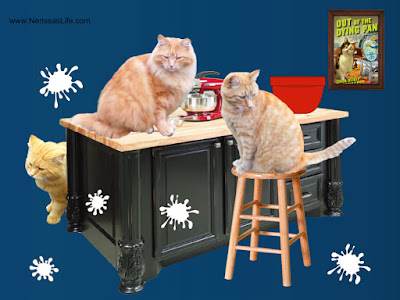 "Little?" and Andy raised an eyebrow.

"Little," Rushton answered firmly.  "And that's exactly what you will say if questioned by the peeps.  Got that?"

"Got it," Anderson nodded before turning to his other brother.  "Seville, you really should tell everyone about the giveway.  Tell them how to enter and stuff.  Your readers will want to know.  Or...  Or do you want me to do it? I can, you know.  I can definitely do that.  Here goes."

Linda Reilly is giving away an AUTOGRAPHED copy of Out of the Dying Pan to one lucky reader. To enter, simply leave a comment on this blog post before midnight, Atlantic time, on Sunday May 29th, 2016.  The winner will be selected by random drawing on Monday May 30th.  Contest is open world-wide, unless prohibited by law.  No purchase necessary.

Disclaimer:  We received no monetary compensation for this post.  Linda Reilly is giving away a copy of her book to one lucky reader but we cats bought our own copies for Kitty Lit. 101.  Also, all opinions are our own.  MOUSES!

Posted by Seville at Nerissa's Life at 15:32