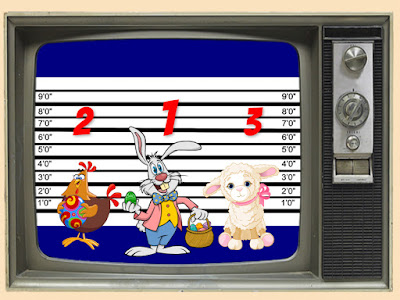 Seville awoke with a start.  "What was that?" he whispered to himself. "What was that noise?" Deciding to investigate, he jumped off the bed. The noises appeared to be coming from the main floor so he padded down the steps, through the hall and kitchen and into the family room, only to find his two long-haired marmalade brothers munching on cat treats, with their eyes glued to the television set.

"What are you doin' watching TV at this hour?" Seville demanded of his brothers.  "You two have any idea what time it is?  It's way past your bedtimes and if Peep #1 finds out, she's gonna freak.  Oohhh... SHOVE OVER," and Seville settled in beside Rushton and Anderson.  "This show does look good.  What's it's about?  New crime drama or something?"

Rushton answered in a whisper.  "Not a show, Sivvers.  It's the news."

BREAKING NEWS...  Earlier this evening, the suspect wanted in this afternoon's high-speed police chase was picked out of a police line-up by several witnesses.  Suspect has been identified as Mr. Harold Bunnykins of Number 22 Hyacinth Lane.  Bystanders state...

"OH MY MOUSES!" Seville, Rushton and Anderson cried in unison.  "That there is the Easter Bunny, for sure!"

At that very moment, Mason came tearing into the family room.  "Seville!" she yelled.  "We have an emergency situation.  Word on the lawn is that the Easter Bunny has been arrested and is being held for questioning regarding a massive egg theft and..."

"I know!  I know!" and Seville pointed to the television screen.  "It's all over the news and everything.  LOOK!"

"No time to watch TV now, Sivvers," and Mason pulled her brother to his paws.  "The teleportation device is primed and ready.  We need to break the Easter Bunny out of jail, immediately.  Kids will be waking up tomorrow morning and there will be no chocolate eggs for them to find.  There's no time to waste!"

"Why don't you just use one of those whisky things of yours," began Anderson, "and whisk yourself back in time and prevent him from getting caught in the first place?"

Seville stared at his brother.  "That's not a bad idea.  Where did you get it?"

"NO, I meant what I said.  Everybody...   Oh for mousin' out loud!" and Mason threw her paws into the air in frustration.  "Why am I even explaining this to you, Rushton?  Come on, Seville, we have work to do," and with that she hauled Seville out of the room, leaving Anderson and Rushton to continue watching television.

"You have any idea where they're holding him?" Seville asked Mason as they scurried toward the teleportation device.

"I'm one paw ahead of you, Sivvers.  I've programmed the coordinates into the teleportation device. Eggbeaters are at the ready.  Here," and she thrust a large bag into Seville's paws.  "Things we might need for our mission."

Moments later, Seville and Mason were flying through space, teleporting to the police station where the Easter Bunny was being held.

After landing safely, the two cats approached the front doors with caution.  "How are we ever gonna open those?" Seville asked of his sister.  "They look pretty heavy and neither one of us can reach the..."

"Run for it!" Mason hissed as a door opened and a uniformed officer exited the building.  Mason and Seville high-tailed it inside before ducking down a side corridor.

"Now where are those blueprints?" and Mason dug through the bag she had instructed Seville to bring.  "Got them!"  Spreading the blueprints for the police station out on the floor, she circled the locations of the holding cells and interrogations rooms.  "They'll be holding him either here or here," she stated.  "We're currently at the front desk which is right here," and she used the marker again to make a large letter 'X'.  "We'll make our way to the interrogation rooms first and then down to the cells if necessary."

Seville gazed around.  "What if someone spots us?"

"Got that covered.  Put this on," and Mason thrust a police hat at Seville.  "Wag your tail and say woof and they'll think you're a police dog on staff."

"Wag my tail and say woof?" Seville scoffed.  "Like that's gonna work.  MOUSES!"  At that very moment a uniformed officer turned the corner and looked down at the two cats.

"Woof!  WOOF!"  Mason and Seville cried, while flipping their tails back and forth.  The officer smiled and muttered, "Evenin'."

"Well oh my mouses, I'll be darned," Seville murmured, shaking his head.  "It did work, after all."

"Told you.  Now come on, time's a wasting.  We need to go this way," and Mason hauled at her brother by his tail.

Finding the interrogation rooms empty, the two cats continued down to the basement where they found the holding cells and there before them was the gloomiest looking rabbit either one had ever seen.  Seville grabbed the iron bars and peered inside the cell.  "Psst...  Harry!  We're here to spring you.  Hang on there, bunny.  I mean, buddy.  No, I really do mean bunny.  MOUSES!" 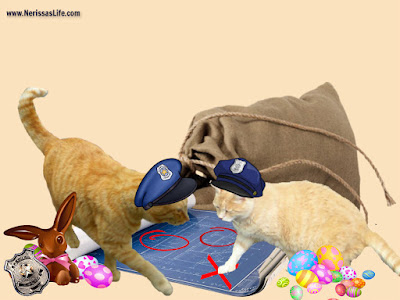 At the sound of Seville's voice the Easter Bunny's ears perked up.  "Seville, is that you?  Seville the Cat?  I'm locked in here and I can't get out."

"Don't you worry Mr. Bunnykins," piped up Mason.  "We'll have you out of there in a jiffy. Seville?  Need one of your hairs."

"No Mason, Harold is a bunny, not a hare.  Easter Bunny, remember?"

"But I said he's a bunny as in rabbit and not as in hare."

"What are you talking about, Seville?" Mason asked, furrowing her eyebrow whiskers.

"Excuse me," Harry interrupted.  "Seville, I think she needs one of your hairs," and with that he plucked a hair from Seville's coat.

"Ouch!  Oh.  MOUSES!"  Seville watched as Mason used the hair to pick the lock on the holding cell.  Within seconds the lock popped open and the cell door opened.  "There you are, Mr. Bunnykins, you've been sprung.  Free as a bird."

Seville tapped his sister on the shoulder.  "Mason, he's a bunny, remember?  He's not a bird."

Mason rolled her eyes.  "Just grab the rabbit's basket and the two of you follow me."

The two cats and Harold the Easter Bunny crept down the hallway, quietly.  "Why were you locked up in the first place?" Seville whispered.

"Weasel Syndicate.  What else?  Some weasel was caught raiding a hen house and, in typical weasel fashion, he made a deal with the police in order to get off with a lighter sentence.  Claimed I was the mastermind behind all the egg thefts leading up to Easter."

"And were you?" Seville asked with a gasp.

"Of course not!" Harry cried in his own defence.  "Weasels.  You can't trust a thing they say..."

"STOP RIGHT THERE," a loud voice demanded from behind them.  "Put your paws up and turn around...  slowly."

The cats and rabbit obeyed but when Seville raised his paws, he dropped the bag he had been dragging around and out of it fell a spare eggbeater.  The police officer peered at it, clearly wondering why a cat would be carrying eggbeaters around with him.  He leaned over, giving it a visual examination while being careful not to touch it.  Seville took the opportunity to act and snatched the eggbeater from the floor and started turning it with a flourish.  At the same time, Mason grabbed Seville by the tail and Harry by his ears and dragged them both over and onto a wheeled push cart that just happened to be in the hallway.  Seville continued to beat madly with the eggbeater while yelling, "PREPARE FOR TELEPORTATION.  INITIATE TELEPORTATION. TELEPORTATION INITIATED!"

The air in the hallway became hazy and sparks began to fly.  Off in the distance the two cats and rabbit could hear police officers yelling as they scrambled to catch the escapees but they were too late.  Seville, Mason and Harry were already whizzing through space, teleporting home on the makeshift push cart teleportation device.

"Drop me off at my workshop, would you?" Harry asked the cats.  "I need to pick up my Easter supplies and start hiding eggs before morning.  Can't disappoint the kids, you know."

"Of course you can't," Seville nodded in acknowledgement.  "We'll have you at your workshop momentarily but while I have you here, let me tell you 'bout an idea I have.  Picture it, catnip Easter eggs.  What do you think?   You think you might hide a few of those at my house this year?  After all, I did help spring you out of that jail cell and all." 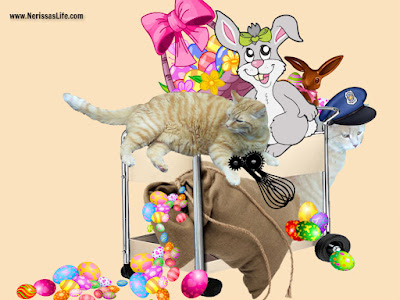 The cats waved goodbye to Harry as they took flight once more, heading for home, themselves. Harry waved back, calling out, "Happy Easter!" Then he headed inside to gather up his supply of Easter eggs, chocolate rabbits and baskets but before starting his deliveries, he put together one very special basket filled with Easter eggs made entirely of catnip, for his very special feline friends.

Posted by Seville at Nerissa's Life at 02:30