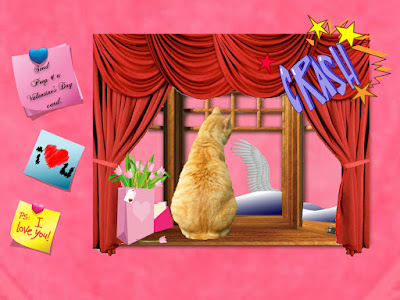 "What the mouses?" cried Seville as he looked up from his computer. "Snowball hit my office window or something?  Is someone throwing snowballs at my window?"

The marmalade cat got up from his desk, hopped onto the window ledge, and peered outside. "Awww...  MOUSES!  It's a bird.  I can see a wing protruding out of the snow."

"Peepers!  OH PEEPERS!" Seville yelled.  "Bird down, outside.  You wanna do something about that?"

The cat's cries were met with silence.

"For mousin' out loud," Seville muttered under his breath.  "PEEPERS!  PEEPERS!  There's a bird outside needing your help.  Did you hear me?  Some stupid bird hit my office window and as I'm busy working on my blog post, you're gonna have to deal with him.  Okay?"

Settling back in at his desk, Seville started to type but after a few minutes, he realized that Peep #1 had not yet gone to the aid of the injured bird.  "MOUSES!  Boy-oh-boy I have a useless peep.  I can see I'm gonna have to go outside and help that bird myself."

Seville stomped across the office floor, toward the door.  Stepping outside, he made his way over to where he had spotted the bird earlier.  "Oh my mouses!" he gasped, stopping dead in his tracks. "Uhhh...  Ummm....  Excuse me but uh...  I'll be right back."

Racing back into the house, Seville yelled up to Peep #1 from the bottom of the stairs. "PEEPERS! We've got the weirdest looking bird out front.  He's pretty big for a normal bird and not at all pretty and I think he's wearing a diaper.  Seriously Peepers, you have got to go out there and deal with that uh... thing.  And could you get on that right away 'cause to be perfectly honest, he's kinda freaking me out.  Peepers!  PEEPERS!  You up there, Peepers?  Come on, I need your help down here.  PEEPERS!!!"

Met with silence once more, Seville threw his paws up in the air with frustration and stomped back outside.  "Diaper or no diaper, I can see I'm the only one capable of dealing with this stupid bird.  I have got to get myself some better staff.  MOUSES!"

"Hey, did you just call me a bird?" the bird asked.

"He wears a diaper and talks.  MOUSES!"

"I am not a bird, sir.  The name is Cupid and would you mind helping me out of this snow?  It's really cold."

Seville grabbed Cupid by the arms and pulled him to his feet.  Narrowing his eyes he asked, "Are you sure you're not a bird?  You have wings like a bird."

"I am most definitely not a bird," Cupid scowled.  "A cat thinking I'm a bird.  Of all the...  Oh, it's absolutely FREEZING out here!" he cried, and beginning to shiver, he drew his arms close.  "How can you stand it?"

"Yeah, well welcome to Canada, buddy with wings but who's not a bird.  It's the middle of February so that kinda means there's gonna be snow and it's gonna be cold.  Maybe if you weren't flying around out here in nothing but a diaper..."

"It is NOT a diaper!" Cupid yelled.

Seville raised an eyebrow.  "Really?  'Cause uh...  'Cause it kinda looks like a diaper to me.  Hey! Watch where you're pointing that thing," and he pushed Cupid's bow and arrow away from him.  "You could hurt somebody with that."  Seville sat back on his haunches and stared at Cupid.  "Okay, so you're not a bird.  Not even a diaper-wearing bird.  But you do look pretty cold.  Why don't you come inside and warm up." 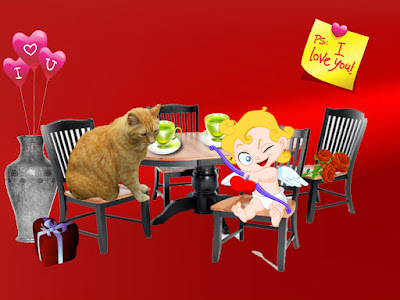 Cupid sat down at the kitchen table while Seville poured two mugs of hot nip tea.  "Get this into you and you'll feel a whole lot better," advised Seville.  "So tell me, how did you end up in my neck of the woods and crashing into my office window?"

"That last Nor'easter blew me off course.  I tried flying around it but got caught up in some tail winds and then when they turned..."

"You have a tail?  I didn't see any tail," and Seville tried to get a glimpse of the back of Cupid. Seeing nothing but wings he gave up and asked, "Cinnamon heart?" The cat pushed a candy dish across the table after grabbing a pawful of the candies himself and popping a couple in his mouth.

"But they're green," Cupid stated, staring at the heart-shaped candies.

"That's on account of the nip," explained Seville, crunching down on one.  "Nip makes 'em green."

Cupid picked up a candy and sniffed it.  "And they smell..."

"Nippy?  Of course they smell nippy.  That, too, is on account of the nip.  I get Peep #1 to make 'em for me using nip in place of the cinnamon.  Much better that way, for sure."

"But then why do you call them Cinnamon Hearts?" asked Cupid.

"Well actually," began Cupid, "Valentine's Day IS my business.  It's my busiest day of the year and I cannot believe, for the life of me, that I'm stuck here in a cold and snowy place, conversing with a marmalade cat at his kitchen table and eating catnip-flavoured, green Cinnamon Hearts that do not look or taste like real Cinnamon Hearts at all."

"And don't forget how you're doing all that while wearing a diaper," added Seville.

"Work?  YOU GO TO WORK WEARING A DIAPER?  Just what kind of work do you do?"

Cupid opened his mouth to complain about the diaper comment again but thought better of it.  He needed Seville's help.  "Please...  I'm not sure that I'm up to flying on my own.  I hit that window pretty hard.  Maybe I could catch a last-minute flight.  Is there an airport nearby?"

"Not a commercial one, no.  Where is it that you need to go?"

"I needed to be in Paris hours ago.  Are you sure there are no International airports around here?" asked Cupid.

"Sorry kiddo but...  WAIT A MINUTE!" and Seville slapped a paw to his forehead.  "I can teleport you over to Paris in a jiffy.  You ever travelled before using eggbeater teleportation technology?"

Cupid screwed up his face.  "Eggbeater what?"

"Eggbeater teleportation technology," Seville repeated slowly, exaggerating every syllable. "Mouses, don't know why I didn't think of that before.  I can get you to Paris in mere minutes.  That would be Paris, France, I assume.  Or were you heading for Paris, Ontario?  Doesn't matter, really. All I need are the global teleportation co-ordinates and we'll be all set.  Well all set except for..."

"Except for what?" Cupid questioned.

"Well except for that stupid diaper you're wearing.  No way, no how, am I travelling all the way to either of those two Paris places with a bird or a baby or whatever you are, while you're wearing nothing but a diaper." 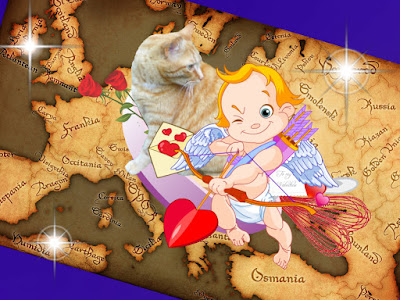 "Yeah, yeah," Seville interrupted.  "You keep saying that and one day, someone might even believe you, but that someone is not gonna be me.  A diaper is a diaper is a diaper, for sure. Hmmm...  We're going to have to find you an outfit of some sort. Neighbours' dog over on the next street has an entire wardrobe of jackets and stuff and I think you and he are about the same size.  I'll pop over and ask if I can borrow one for you while you find this Paris place on a map.  Meet you back here in ten minutes for teleporation.  Okay?  Okay."

Seville was still muttering as he turned to leave for the neighbours' house.  "Gosh, some baby bird guy hits your office window and you try to help him out but all he does is argue about diapers and stuff.  Gotta get rid of him quickly so that I can get back to working on my blog and wish everyone a Happy Valentine's Day, for sure.  MOUSES!"

HAPPY VALENTINE'S DAY EVERYBODY!
Love you!  Love you lots!  Love you always and forever.  Purrs, Seville.

Posted by Seville at Nerissa's Life at 17:29