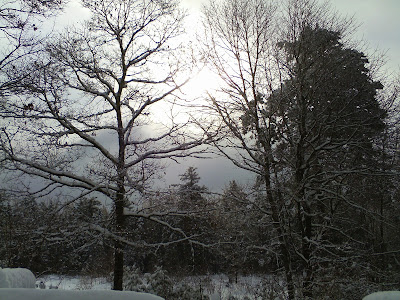 Heading off to bed last night, I said to the peep, "Peepers, don't bother waking me up in the morning 'cause the weatherpeeps are saying we're gonna be having a snow day."

And do you know something?  They were right!  Snow day right across the province with the exception of a paw full of schools. MOUSES!

Now you might be wondering why I even care if it's a snow day or not on account of my being a cat.  I mean, for cats, EVERY day is a snow day, if you know what I mean.  It's not like we have to get up, dress ourselves and make our way over to the school bus to be driven to school.  No sirree, we cats wake up fully dressed.  MOUSES!

But believe it or not, snow days do affect us.  That's right, they affect us cats.

The great thing about snow days is the fact that when they happen, the whole world around us appears to slow down.

Okay, maybe I made that last bit about the planet slowing down its spinning up but the thing is, when we get snowed in, I get to spend more time with the peeps and that, my friends, is a very good thing, indeed.  MOUSES!

Truth be told, this time around, we didn't get a lot of snow compared to some snow days.  I've seen way more snow out there before.  Way, way, WAY more, to be sure.

And this particular snow came at just the right time on account of The Big Dig and all being dug yesterday and the day before.  The digging was dug and the snow came afterwards.  MOUSES!

And about that big ol' dig...  I'll be blogging more about The Big Dig in future blog posts so don't worry if you missed out on all the excitement for let me tell you, there was plenty of excitement to go around.

But back to the snow.

No, back to the schools! 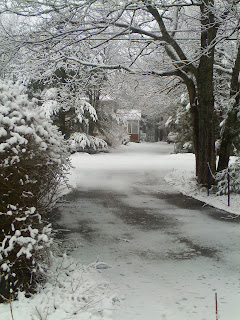 So almost all the schools, right across this here province were shut down on account of the snow. What I wanna know is this...

Not that I fall down on a regular basis.  Truth be told, I can't remember when I last fell but my sister Connie did last year, remember?  Yup, Connie fell down and broke her leg and had to wear a cast for three months and a week.  Didn't hear about any special Connie days after that.  MOUSES!

Of course, there was no snow on the ground when Connie fell.

And she did fall inside the house where you wouldn't be expecting there to be any snow anyway.

Which if you ask me, makes her fall all that more difficult to do.  She should get bonus points for falling without any snow.  MOUSES!

But I have seen Peep #1 fall in the snow.  Not today.  Today she managed to slip and slide and skid her way over to the garage to grab some flower pots - 'cause you know, when most peeps are grabbing their shovels to deal with the snow from the snow day, my peep is getting her flower pots ready and planting seeds because when it comes to peeps, she's the silliest peep of all - without falling down but it has happened.  Yup, she has fallen in the snow, for sure.  MOUSES!

Once, way back when, when Peep #1 was still in her kittenhood and attending school, she fell in front of said school on the icy sidewalk and one of her classmates - we'll call him MF although I am in no way admitting that his initials were in fact MF although I'm not saying they weren't, either - asked if she had had a nice trip.  MOUSES!

Now isn't it funny that Peep #1 can remember things like that?  Things that happened way back when, in the dark ages or even further back like when dinosaurs roamed the earth or something like that, before I was even born, and yet can forget where she put the car keys after using the car only yesterday?

Of course, on account of the snow brought to us by this here snow day, the peep wasn't going to use the car anyway.

Forgot like she forgot to leave out a few extra treats for me this morning because I'm such a good kitty and deserve extra treats on a daily basis.

Or forgot like she forgot 'bout that one time when I sprayed her, marking her as mine...  Don't I wish.  Peeps never forget stuff like that.  Let me tell you, you pee on a peep ONE time and you'll spend the rest of your days living that one down.

Or maybe it just snowed.

And because this is Canada. 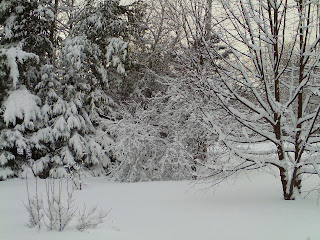 Or maybe....  Maybe this was all part of some big gigantic plan, plotted by that MF fellow way back when, when the dinosaurs roamed the earth and all, so that he could once again ask the peep if she had had a nice trip and his plan is just coming to fruition now.

If so, his plan is taking shape slower than slow.  Like dinosaur slow.  Or like dial-up Internet.  MOUSES!

Or maybe it just snowed.

Please note that the pictures used in this here blog post were not taken today but rather, in a previous year but in all honesty, even though they say that no two snowflakes look alike, snow looks like snow if you happen to ask me.  MOUSES!

Posted by Seville at Nerissa's Life at 19:15