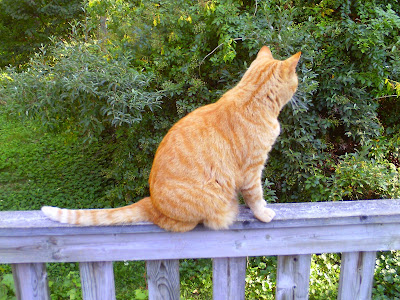 PEEPERS!  Come over here for a second, would you?  You forget to pick up some sense in the common sense aisle last time you were at the grocery store?  They do sell that over there, don't they?  I mean, they sell pretty much everything there, right?  You forget to get a bag of sense?

Don't give me that look, Peepers.  I'm perfectly justified in asking such a question.  I've been counting all these bags of leaves you dumped back here.  Taken up most of my morning and I still haven't finished counting.  Had a few distractions, you see.  But never mind that.  Never mind the distractions.  Instead, mind the fact that I'm wondering why I'm having to count all these bags in the first place.

What's that, Peepers?  But I do have to count all the bags.  I need to figure out exactly how lacking in sense you are and my final leaf bag total will tell me that.  MOUSES!

Hold on Peepers!  Don't leave just yet.  Let me ask you something.  Let me ask you exactly why you've dumped all these bags of leaves back here because as far as I can tell, all you've done is make one big ol' mess.  The magnitude of the mess will be determined once I finish my mathematical calculations although, truth be told, I appear to be having a little trouble getting past the number four.

But back to the question at paw.  Why have you dumped all these bags of leaves back here?  I only ask because I'm thinking you're doing something backwards.  I mean, everyone else in the neighbourhood is raking up their leaves and putting them in bags and then putting those bags at ends of their driveways so that they'll be taken away.  They don't want them any more.  They don't want the leaves.  They're thinking of them as garbage or something.

So why on earth are you driving around, picking up the stuff they're throwing away?  And then hauling them into my back yard and dumping them in my garden?  MOUSES!

You think about that for a minute, Peepers, while I get back to my counting.  One, two, three, four...

What did you just say, Peepers?  You say the leaves aren't garbage?  Then why is everyone putting them in garbage bags and hoping someone will haul them away?  And why-oh-why have you taken it upon yourself to be the person who ends up doing said hauling?

Now if they were bags of nip I could certainly see why you'd want to pick them up although even I wouldn't know what to do with this much nip.  I mean, there are a whole lot of bags back here.  That would be a whole lot of nip.  That would enough nip to nipify all the cats in Atlantic Canada, to be sure.  MOUSES!

Hmmm...  You don't suppose there might actually be some nip in some of these bags, do you Peepers? Maybe one or two nip bags got mixed up with the bags of leaves?  Nah, I would have smelled the nip by now if there were.  MOUSES!

Nope, that's just making it more complicated, Peepers.  How 'bout we try this.  You start counting over at that end and I'll count from this end and when we meet up, we'll add 'em all together.  But be sure to keep your counting to yourself, okay?  I'm hoping to get past four this time.  MOUSES!

Okay, Peepers.  What have you got?  How high did you count?

Really?  That high, huh?  You sure?  I only ask because I wasn't aware you were capable of counting that high.  Didn't realize you had that many claws...  I mean, fingers and toes.  MOUSES!

So we'll add your sixty-eight bags to my four.

Yeah, what of it?  Look, the only reason I didn't count past four was that there were a number of distractions over at my end of the pile of bags of leaves.  I actually counted to four numerous times but you know how it is.

Oh excuse me Peepers but I'd like for you to meet Mr. Birdy and his missus.  They're visiting for a bit before flying south.  They have a condo in Florida, I do believe.

What's that, Peepers?  You say the answer is seventy-two?  How did you come up with that, Peepers?  You have that memorized or something because if you do, you're doing it all wrong.  With the new kitty math at our paws, you have to add stuff to my four in increments of nine until you reach the point where you can't add any more nines.

Because kitties do everything with nines!  Jeesh...  Some peeps.  MOUSES!

Then, of course, after all that adding you have to multiply everything by nine at least once and then divide by nine the same number of times.

Because like I said, we kitties like the number nine.  It is the purrfect number, to be sure.  (Please excuse the kitty talk but I couldn't help myself there.)

Look at that, Peepers.  Your answer of seventy-two was right after all.  MOUSES!

And you say you did that just by somehow knowing that four added to sixty-eight would be seventy-two, huh?  Interesting...

Well we'll discuss your weird, old-fashioned and archaic math they used to teach at dinosaur school at some other time, Peepers.  Right now, I want to discuss this lack of common sense you appear to have.  By my calculations, it appears that you're about seventy-two bags of leaves short of a spoonful of sense.  MOUSES!

Apparently, the peep is creating a new flower bed in which she plans on planting primroses and stuff and since there is currently lawn - yeah, that's what we call it at my house even though most real gardeners would beg to differ - in the area where the flower bed is to be, she's piling up the leaves and adding a little alfalfa meal to help speed up the decomposition process so that by next fall, she'll have lots of nice humus-rich soil for those primroses. Wonder why she didn't just say so in the first place.  MOUSES!