Let me tell you something.  Unsolicited advice is rarely well received but if you're lucky, the cat on the receiving end won't give you any advice as to where to stick it. MOUSES!

Now first of all, I have to point something out.  Cats are always allowed to give peeps advice, unsolicited or not. Always.  That's right; it's a fact.  Cats are incredibly intelligent, you see, and quite frankly, peeps are lucky to get our advice for free. MOUSES!

You know, peeps watch cats doing the smacky paw thing and usually believe the cats are arguing over territory - like the best napping spots and sunpuddles - or toys.  Or food.  Yeah, sometimes they'll think we're arguing over that last remaining treat.  But more often than not, one of the smacky pawing cats decided to offer the other smacky pawing cat some unsolicited advice and although we cats can dish it out, we can very rarely take it.  Thus, the event known as smacky paws, you see.

I remember once when I suggested to my sister Connie that she not slobber quite so much on the ol' nip toys.  I said it nicely.  I was only trying to help.  But what kind of response did I get?  What I got was a pawsmack upside of the head and and extra dose of slobber all over the nip toy in question.  MOUSES!

And if you think that's bad, you've obviously never witnessed the result of a peep foolishly attempting to give a cat any unsolicited advice.

What's that, Peepers?  You'd prefer if I didn't fling the kitty litter out of the box like that?  Sure thing, Peepers.  No probs.  I can fix that in a jiff.  Instead of flinging, I'll just tip this whole box over and do my business right there on the floor.  How's that for you, Peepers?  That work out okay?

But what about peeps giving other peeps unsolicited advice?  How well do you think that might turn out?

Well I can tell you the answer to that right here and now.  It doesn't.  Nope, doesn't work out well at all.  MOUSES!

Not being the free spirits that we cats are, peeps don't usually resort to the ol' smacky paw thing. It's too bad, really, as a few more smacky paw sessions might result in a little less stress in the general peep population.  Of course, it might also result in an even more heavily burdened judiciary system.  MOUSES!

So if the smacky paws are not on the table, what are?  What avenues do peeps have to deal with the givers of unsolicited advice?

Recently, my Peep #1 was on the receiving end of advice that was simply not solicited so let me tell you what advice I gave to her.

I knew she wouldn't go for the smacky paws idea so I didn't even suggest that one and instead, moved right on to the ol' trip and run.  It's an easy technique.  Just stick out a paw or tail in front of the advice-giving peep when they're walking and not looking and viola!  You'll have one tripped up peep on your paws for sure.

Of course, the beauty of this technique is that if you do it correctly, the peep who has been tripped can't prove you tripped 'em on purpose and therefore you'll never get any blame.  In fact, if you do it really well, they'll actually apologize to you for tripping over you.  Sometimes, they'll even give you extra treats!  It's genius, if I do say so myself. 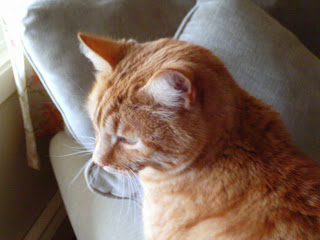 Unfortunately, the ol' trip and run does have a downside.  Peeps aren't very bright, you see, and often fail to pick up on the nuances of the technique.  If they don't know - and can never figure out - that you tripped 'em on purpose, to punish them for their unsolicited advice, they'll never learn to stop giving said advice.  MOUSES!

Peep #1 didn't want to take that particular suggestion on account of something about tripping up peeps on purpose being kind of illegal.  Don't know what her problem is.  I trip up my peeps all the time.  Guess they just haven't clued in to this fact.  MOUSES!

My next suggestion was the do-what-they-suggest technique which works like a charm.  They give you a suggestion and you do it however, you do it so very well that they realize they should never have suggested the suggestion it in the first place.  They say jump and you don't ask how high.  No siree.  You simply jump.  You jump higher and farther than you've ever jumped before and hopefully, you'll land somewhere you shouldn't be landing and break something other than any of your own body parts and if you do this well, let me tell you, they'll never tell you to jump again.

Remember the peep's advice to not fling kitty litter out of the litter box?  'Nough said.  MOUSES!

Of course my peep, being the peep that she is, rejected this advice saying something about her not using a litter box.  She had no idea, whatsoever, that I was merely giving an example and as I'm assuming no one was giving her unsolicited advice on using a litter box, her answer for the do-what-they-suggest technique would not have involved kitty litter, at all.  What a peep.  MOUSES!

So after all that, my last piece of advice for the peep was to give 'em some advice right back however, as we all know, this last suggestion could lead to the Unsolicited Advice Paradox - or UAP, for short - which is a paradox that has been known to be paradoxically paradoxing.

Before you know it, no one remembers who was in the right and who was in the wrong because seriously, if you didn't like receiving unsolicited advice in the first place, should you, in fact, be giving any advice, at all?  And once the paradox fully takes hold, both parties think they're the injured ones. MOUSES!

So that brings me back to the ol' smacky paws.  Someone says something you don't like?  Give 'em a smacky paw.  Two minutes later, you can both go on your merry way with no grudges being held and no paradoxes created.

Either that or just yell at 'em but not in an advice-giving kind of way.  MOUSES!