"Oh.  Hmmm...  Yup, I can understand that.  But you do realize the peep is gonna freak when she sees you and when I say freak, I mean FREAK."

"Okay, you have a point, there.  She might not be quite as upset as she was when she discovered I had accidentally left an open time vortex in the kitchen way back when, when I was using super glue to glue together four-leaved clovers for her, but let's face it, NO ONE could ever be that upset. I mean, I think I saw smoke coming out of her ears.  But believe-you-me, she is gonna..."

"Run Connie, RUN!  I hear the peep coming and it sounds like she discovered..."

"CONNIE!  What did you do?  Why did you take the cast off your leg?  I'm shocked!  Shocked beyond belief, I am.  Peepers, I knew nothing..."

So that was what happened, at my house, this morning.  MOUSES!

As you know, several weeks ago, Constance broke a hind leg.  Since then, she has been hobbling around on three legs, dragging her fourth, all wrapped up in a cast, behind her.  After six weeks, the second set of x-rays showed her leg hadn't completely healed and she would need the cast for another month.   Guess Connie decided to take matters into her own paws overnight.  MOUSES!

Things began to go wrong when Peep #1 discovered Connie's cast lying on the living room floor, jammed into the wheel of the trolley.  Now let me tell you something.  I know that trolley first-paw and there's no way, no how, that a cat can get a paw stuck in those wheels unless a cat is trying to get a paw stuck in those wheels.  Firstly, the wheels don't move.  At least not on their own. Secondly, there are huge gaps between the wooden spokes that are more ornamental then anything else.  Nope, you can't get a paw stuck in them.  You can, however, use them to pry something off your leg if you try really hard.  Like really hard.  Like Connie did, this morning.

What can I say?  We cats are smart.  Way smarter than the peeps and that is for sure.

Well after the peep discovered Connie had pried off her cast, she called up the doctor's office.  The peep did, I mean.  The peep called and not Connie.  Connie very rarely uses the phone and when she does, it's never to call the doctor.

But once Connie realized the peeps were taking her to the clinic, she was off on a tear.  Trot?  No... hobble.  Connie hobbled down the basement stairs as fast as her three legs would carry her. 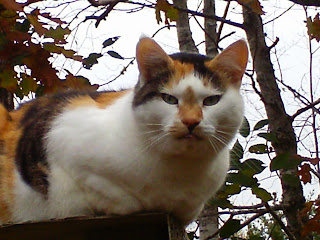 Now it turns out that Connie is surprisingly quick on three legs and even quicker when not weighted down with a cast.  Yup, she was down in the basement, lickety-split, and nowhere to be found.

Eventually though, her hiding spot was discovered.

Sherlock Holmes once said, "when you have eliminated the impossible, whatever remains, however improbable, must be the truth," or something like that.

Connie's hiding spot wasn't really improbable.  It was more like...  inconvenient.  Yeah, inconvenient, for sure.  After the peeps had looked high and looked low, behind washers and dryers and even beneath the ol' oil tank, when there was no sign of Constance they knew where she was. After all, when you have eliminated the convenient, whatever remains, however inconvenient, must be the truth.

Connie had gone to the depths of all depths.  She had entered the dungeon itself.  The dungeon known otherwise as, THE STAIRWELL.  Duh duh duh duh.....

So Peep #1 started hauling suitcases out from under the stairwell.  Hauling them out, one by one. And when only the two steamer trunks remained, Constance could be seen way, way at the back. But although visible, she was still unreachable for those trunks were blocking the peep's passage, for sure.

"Nah-na-na-na-nah-nah," Connie sang, flipping her tail, this way and that.

"You think so, huh?" replied the peep, raising one eyebrow and firmly planting her fists on her hips.

"Don't worry, Constance," I cried.  "No way that the peep will crawl over those trunks," I began before seeing the peep setting about to do exactly that.  "Connie, RUN!!!"

That was all it took and Constance was off on a tear, hobbling past the peep, who was now on all fours.  The peep reached over but it was too late.  Connie raced right past her and out of the stairwell before heading upstairs.  Peep #1 scrambled to her feet, hitting her head on the low ceiling above and crying out "MOUSES!" or something to that effect.

But at the top of the stairs, something happened.  Constance stopped in her tracks for absolutely no reason.  Next thing we knew, the peep had clamoured to her feet and made it out of the stairwell and somehow managed to catch up.  Bending down, she scooped Connie up into her arms and cried a victorious "Gotcha!" before checking the smarting lump on her head.

So wrapped in a towel, Constance was ignominiously carted off to hospital to visit the doctor and undergo goodness knows what traitorous procedures.

That was this morning and it's now late afternoon.  Soon the peeps will be picking Connie up from the doctor's office.  If I understand correctly, she has not only had her cast replaced but also...

THE HORROR OF ALL HORRORS,

Yup, doctor called and said they had bathed her from head to tail.  Like I said, MOUSES! 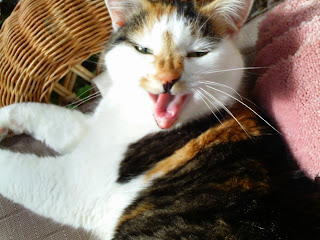 So there you have it, my friends.  The excitement that goes on at my house. Oh, the stories I could tell...

And I'm betting that Connie will have a story or two to tell, too, when she returns home this evening.  She's probably also gonna be mad as you know what.  You know, that word that rhymes with tell but starts with...

What, you've never heard of angry bells before?

Well you know what they say. We learn something new every day.  MOUSES!