Every major news organisation on the planet has been reporting this story like melted cheese on a hot nip pizza, so I figured I had best get right on it, too.  After all, my brother Nissy was one of the world's most famous feline reporters.  The cat with the wherewithal to get the story, no matter what it took.  The blogosphere's answer to CNN's silver fox.  Canada's sterling silver - some said platinum - tabby cat.  When it came to reporting, Nissy was simply the best and I don't want to let him down.

Unfortunately, due to the publishing schedule of my blog, I'm a tad late with my story and said story has, in fact, changed since all you-know-what broke loose, last week.  Actually, it's a bit of a non-starter now but maybe I can write about it anyway. MOUSES!

The headline should now read...  Actor Tom Selleck allegedly steals water that was legally purchased and paid for by, perhaps, actor Tom Selleck.  Try to get your head around that one.

Or perhaps a better headline would be...  Calleguas Municipal Water District of Ventura County spends over twenty thousand dollars trying to prove actor Tom Selleck allegedly stole water that was legally purchased and paid for by, perhaps, actor Tom Selleck.

Exactly how does one steal something they legally bought and paid for?  Any ideas?

So let's try this headline...  Calleguas Municipal Water District of Ventura County spends over twenty thousand dollars trying to prove actor Tom Selleck allegedly USED water that was legally purchased and paid for by, perhaps, actor Tom Selleck and therefore not stolen from the water district at all.  Gosh, my headlines are getting longer and longer by the minute. MOUSES!

Maybe the real crime here was perpetrated by the water district when they spent thousands of tax dollars hiring a private investigator to have him or her follow trucks hauling water to the Selleck's ranch.  Water that belonged to someone other than the water district because it had, in fact, been legally purchased from said district.

Perhaps the water district should have hired Magnum PI.  I've heard he's pretty good.  He has quite the reputation.  Bet he would have explained about the selling and no longer owning thing.  Just saying...

I know what you're thinking.  You're thinking, California is in the midst of a drought and water shortages are no laughing matter and let me tell you, you are absolutely right in thinking that.  But the fact remains, if one is going to accuse someone of stealing something, one had best be sure that the something was actually stolen before one flings about wild accusations.  Not doing so will make it so much harder to legitimise any type of similar accusations in the future.  MOUSES!

It's like when the peep once accused one of us cats of peeing on a nip mouse only to find out that...

Uh, never mind.  It's actually not like that at all.  One of us cats did once pee on a nip mouse. Okay, maybe twice.  But it wasn't me, either time.  I can attest to that.  At least I don't think it was.

But my point is, had none of cats peed on a nip mouse when the peep had accused us, she would never have been able to accuse us again even if we did pee on one because if she did, we would always point out to her the occasion when she accused us of doing something that had never been done and that, in itself, would cast doubt on all future accusations. MOUSES!

I guess with this Selleck thing, it all boils down to - no pun intended with the boiling thing because you know, peeps often boil water - is water shaming. Trying to shame peeps into using less water. Apparently, hashtag WaterShaming is the next big thing.

Water shaming probably seems like a good idea on the surface of that great crystal clear lake of tranquillity, otherwise known as Lake False-Sense-of-Superiority-and-Denial, but this shaming stuff never really works.  Pet shaming was a recent craze and I can tell you from personal experience, the peep can post as many pictures of me washing my tail as she likes but I'm still going to wash my tail and seriously, I'm thinking she probably wants me to, anyway!  Although truth be told, Peep #1 has never posted such pictures of me on the Internet. Other cats, however, have not been so lucky.  MOUSES!

Peep shaming is also pretty much useless.  As you know, I have the worst IT support in the history of IT support.  Attempting to encourage Peep #1 to improve herself, I often post about her being useless when it comes to computer stuff.  But does my shaming of her make her improve?  Nope. She's as useless today as she was yesterday and the day before that and the day before that and... Well you get the picture, I am sure.

Anyway, if water shaming doesn't work all that well, is it really worth over twenty thousand dollars to shame one peep?  I'm thinking no but maybe I'm wrong about that.  I have been known to be wrong before.  There was that time way back in 2011...

And I should just mention that when it comes to washing, peeps waste way more water than we cats do.  We cats wash with spit and polish.  Peeps, on the other paw, use water.  Lots and LOTS of water.  They use water to wash themselves, their clothes and even their cars.  Some peeps even play in the stuff.  Can you believe it?  MOUSES!

Word on the street is that Tom Selleck may or may not have been using the water he allegedly stole, perhaps from himself, as it was legally purchased by someone who may or may not have been him, to water some avocados.  This is of no consequence to me as I don't like avocados because, you know, I'm a cat.  Had he been watering nip plants, it would be a totally different matter.

You know, Peep #1 has been using water to water her plumeria plants.  She had best not get herself on some water shaming list where some private investigator comes along, taking pictures of her lugging watering cans from the outside tap to the plumie pots so that the county can sue her for stealing water from said tap attached to her very own house and being drawn from her very own well.  I mean, she used five or six whole watering cans of water on Friday.  Five or six watering cans full just for plumies!  Plumies that have never even bloomed.  MOUSES!

But come to think of it, what's the peep's is mine and what's mine is...  well...  mine.  So really, she was stealing those watering cans full of water.  She was stealing them from me!  Perhaps I should hire a private investigator to follow Peep #1 from the tap to the plumies and take some pictures so that I can sue the peep for stealing my water.  It's a thought.  Anyone have Magnum PI's phone number?  Anyone know if he still has a PI license?  Anyone? 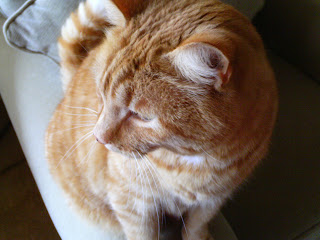 Now that brings us to the last part of this here nutty story.  Although the Calleguas Municipal Water District of Ventura County has seemingly now come to the realisation that they no longer owned the water they once claimed to have had stolen from them, it has not yet been verified exactly who did own it.  Exactly who paid for said allegedly stolen water.  A construction company paid the water district for the water but did Tom Selleck pay the construction company?  We don't know. Or did Tom Selleck pay a third (or perhaps, fourth) party who then paid the construction company that paid the water district?  Again, we don't know.  Perhaps we never will know because truth be told, once the first party started suing the third or fourth party for stealing stuff they no longer even owned and therefore couldn't have had stolen from them, the story got a little crazy.  Crazy like squirrels making nut pies kind of crazy, if you know what I mean.

And just to set the record straight, at the time of publication of this blog post, no squirrels had been implicated in these water thefts.  Nuts, yes, because that goes without saying.  Water, no.  And that, my friends, is that.  MOUSES!

Posted by Seville at Nerissa's Life at 20:01