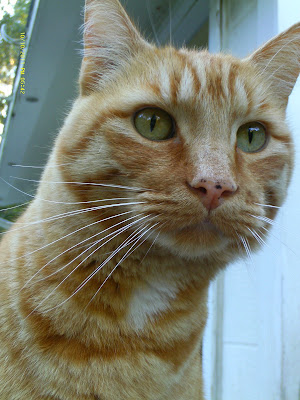 I'm a dude.  Oh yeah, totally. Everyone says so, so it must be true. MOUSES!

It's kind of funny, in a way.  Not funny as in ha-ha and not funny as in the funny farm either.  Or maybe it is...  No, what it is, is funny in an odd sort of way but no one - and I repeat, NO ONE - is being shipped off to any kind of farm.

Well at least I'm not.  Can't speak for my fur-sibs, of course.

Or for that matter, the peeps.

Yeah, Peep #1 has had a one-way, first-class, all expenses pre-paid ticket for the funny farm for quite some time now.  I saw it tucked away in one of her dresser drawers.

Right next to her drawers.  Hehehehee....

But how does one farm humour, anyway? I mean, if a potato farm grows potatoes, should a funny farm not grow funny?  Or maybe stuff just grows funnily, with the emphasis on the ly.

Anyway, what I'm about to tell you is funny in an odd sort of way.  It's not funny that I am a dude but rather, that everyone seems to know that I am.

Way back when, when I first came to live with the peeps, Peep #1 started calling me, every now and then, her dude.  She would call me her Big Orange Dude or something like that.  I never really thought much about it.  After all, I am orange and being a dude seemed like an okay thing to be.

Then one day, when I was at the doctor's office, one of the nurses looked at me and called me - you guessed it - a dude!  I believe the adjective handsome was used, as well.

Now even though this was the second person to call me a dude, I still didn't think all that much about it as I was already used to Peep #1 calling me her Big Orange Dude but then the peep pointed out that even though she called me that, she had never called me that in front of the nurse.  Or any of the other nurses.  Or my doctor, either.  This nurse had just called me a dude because, I assume, I looked like a dude.

Of course, the nurse did not call me her dude which only stands to reason as I wasn't hers.  Not that I'm the peep's, either.  It's more like the peep belongs to me but that is another topic for another post, best left for another day.  MOUSES!

So then there were two.  Not two dudes.  There's only one Seville.  No, there were two people saying that I looked like a dude.  But what's two out of a few billion?

But then I took over Nerissa's blog and social media accounts and that's when things started getting funny.  Again, funny as in odd in only a very slightly humorous way but on no accounts was anyone going to take up farming in the land of the funny. Ranching, however, was a totally different matter.

Although if one could farm humour it would be a very wonderful thing.  Pretty funny, too.  MOUSES!

But as I was saying, I took over Nissy's accounts on the Internet and that's when I noticed that more and more people were calling me a dude.  Bloggers and tweeters and Facebook peeps and anipals.  In fact, at least three cats have called me a dude in the last week!  At least three!  And who knows how many others have thought it without actually typing the word.

So I thought to myself, perhaps I should check out the definition of this word, dude.  You know, just to be sure it's okay.

Luckily for me, Nissy had all those dictionaries on paw so checking out the definition of dude was easy as easy can be.

And it turns out that being called a dude is A-okay, for sure.  Well, of course, I did know that all along.  I had already deduced it.  You see, I'm a dude and I'm okay so being a dude must be okay, too.  MOUSES!

A dude refers to a person or in my case, cat, who concerns himself with clothes, grooming and manners.  At least, that was one definition.  There were several, you see.

Well I'm not too keen on the whole clothing thing but I am very much into grooming.  I groom myself daily.  And as for the manners?  I am very polite.

What's that Peepers?  Oh, that.  Yeah, well I only peed on you once.  Perhaps it wasn't the most mannerly thing to do but constantly bringing up the transgression isn't, either.  MOUSES!

But as I was saying, I am very into grooming.  I groom myself daily.  Sometimes semi-daily.  Semi-daily?  Is that twice a day or once every two days?  MOUSES!

Wait a minute!  STOP THE PRESSES!  I am into clothes.  I don't wear store bought ones but the appearance of my orange fur is extremely important to me.  I always keep it sparkly clean.  And I might consider wearing additional clothes if I had access to ones that suited me.

If the peep would be so kind as to make me a little velvet forest green vest, I might consider wearing it.  Perhaps a little vest with a pocket.  And in that pocket I could keep a watch.  A pocket watch, no less.  A wrist watch would be out of the question as it might catch and pull at my fur, you see.  Plus, looking at my paws, I don't actually have any wrists.  MOUSES!

But a little gold pocket watch tucked into the pocket of a velvet green vest with some gold brocade and buttons would do quite nicely.  And, of course, I would need a cane.  No, a walking stick. Sounds so much better, don't you think?  And a hat!  A hat with a feather, perhaps.

Some might say that a dude should wear a cowboy hat and, I suppose, that really might be fitting but in all honesty, I think a hat with a feather really would look better with that velvet vest.  Velvet with a satin lining would be nice.  And since I am a dude, I'm supposed to be concerned with my appearance so really, if anyone would know it would be me.

And speaking of land, I might also need a ranch.  While checking out the definition of dude, I came across a thing called a Dude Ranch.  Didn't really look into it all that well but it sounds pretty good.

Is dude ranching like farming funnies? Oh my gosh, do they grow dudes? MOUSES!

I should enquire further before booking a ticket, I think.

And in the meantime, I have some work to do.  Oh Peepers...  I need some help over here.  Which of these fabrics should I order on-line for you to make me a vest and should I order you up a pattern, too, or do you already have one of those?  MOUSES!

Posted by Seville at Nerissa's Life at 18:41