this is Canada, Baby! 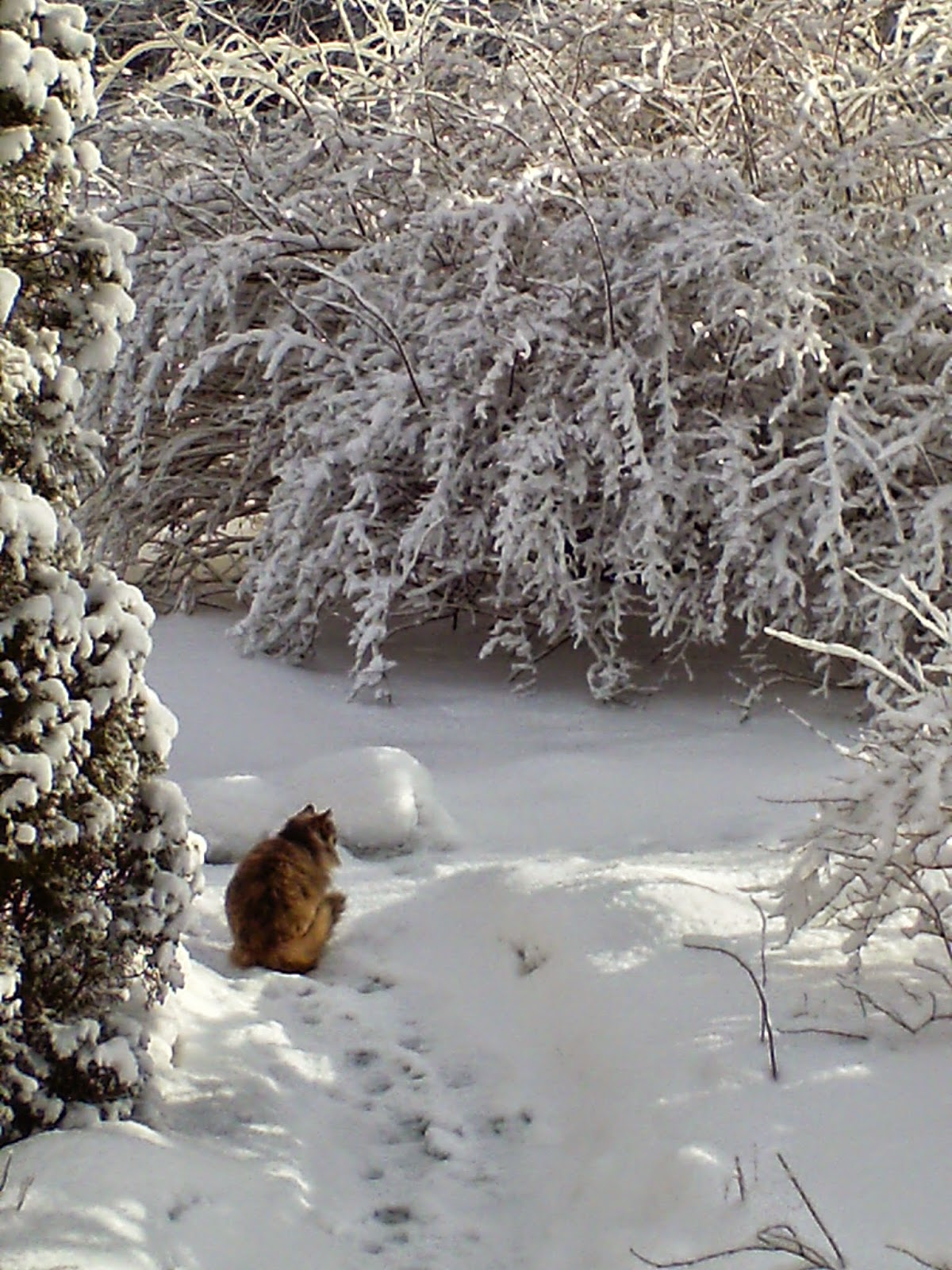 Boy-oh-boy those weatherpeeps have been busy.  Busy doin' whatever weatherpeeps do, I suppose.  What do they do, anyway? Anybody know?

Well I can tell you what they don't do. They don't actually control the weather.  Surely if they were controllin' the weather, they'd be able to keep it in line, you know?  Keep it under control.  Make the ol' weather a bit more agreeable and well...   you know... controlled.

Lately our weather has been out of control. Totally uncontrolled, for sure.  Ol' Jack Frost, the real power behind the weatherpeeps, has been wielding his little weather wand thingy that he uses to frostify the place and makin' things a little too frosty for my taste.  MOUSES!

One day last week, the ol' mercury dipped to -17C at one point and that was without the wild chill.  Not sure what the wind chill was, that day.  It was way too cold to go out and see.  Then we got a bit of a break when it warmed up in the afternoon to -15C.    Warmed up to -15C?  Warmed up?  What can I say?  This is Canada, baby!

And speakin' of the ol' mercury thing...  Isn't it funny how we still say that?  I know that thermometers used to contain mercury but they don't anymore.  Haven't for a very long time, I think, but we hang onto the phrase, anyway.  I bet that one day, in the far-off distant future, peeps will still be usin' that phrase but so much time will have passed between then and when thermometers still contained mercury, that most peeps won't remember the origins of the phrase, at all.  Stuff like that happens, you see.  Those future peeps will have to Google (TM) it, for sure.

And I wonder if the phrase, Google (TM) it, will hang in there, too?  And I also wonder if the Google (TM) in Google (TM) it should be capitalised since, in all honesty, you really are - accordin' to the rules of the English language - usin' the word as a verb and not a proper noun.  Of course, schools 'round here teach less and less grammar, these days, so perhaps no one will figure that out.  Interestin'...

I also wonder how peeps manage to include the proper little trademark icon thingy when they're writin' on Blogger.  I mean, Blogger (TM).  MOUSES!

But back to the weather.  It was really cold last week.

Well at least it was cold for part of last week and then it warmed up.  By the end of the week, temperatures warmed up to right around the freezin' point.

By Friday, the weather got really freaky.  First it snowed for a bit.  Then it rained.  Then it slushed. Yeah...  slushed.  That's what I call it when the white stuff comin' down isn't really snow nor is it rain but rather, somethin' you would find on the ground when the roads are all slushy.  Somethin' you would choose to walk around and not through on account of its slushiness.  Somethin' wet, cold, half frozen and icky.  MOUSES!

Hard to walk around the slush when it's fallin' down from the sky, you know?

What's that, Peepers?  You're sayin' that it was sleet?  Sleet, slush, whatever...  MOUSES! 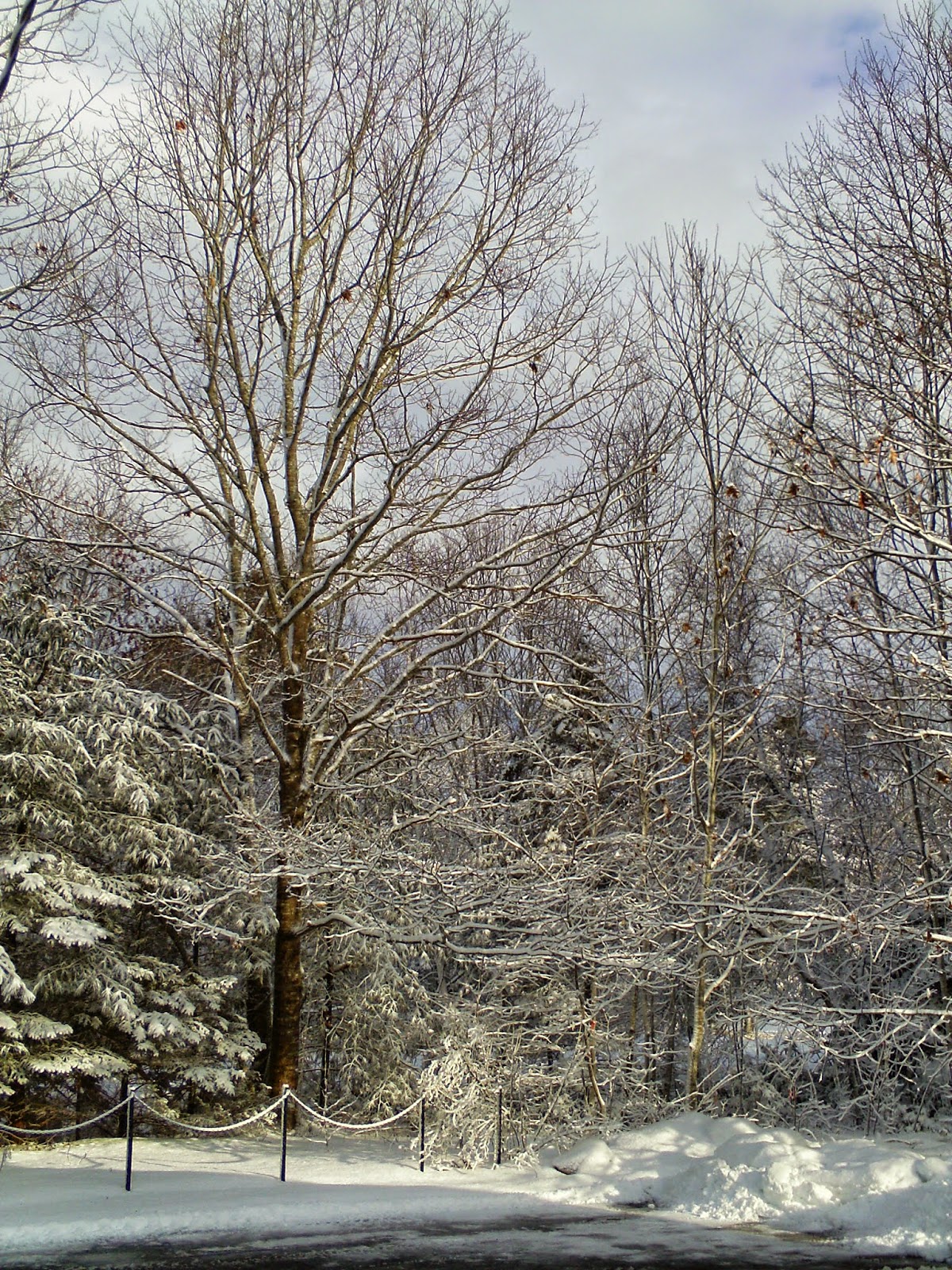 Anywho...  It was slushin'.  After it slushed it started to snow again and then it began to slush, once more. That's when Peep #1 decided to run out to do some errands.  What a peep.

The followin' adventure was told to me by the peep.  I wasn't there to personally experience said adventure on account of my bein' a cat and way too smart to go out in a slushstorm, snowstorm or whatever you wanna call it.  That and the fact that I don't like goin' in the car, period.  Whenever I'm in the car, the car drives straight to my doctor's office.  MOUSES!

So after pickin' up the mail at the mailbox, Peep #1 drove to the post office to pick up a parcel and then down to the first grocery store on her list.  Walkin' into the post office from the car, and into the grocery store, too, the peep got slushed upon.  She walked through some of the slushy stuff, too.  Had she had more sense, she would have walked around that pile of slush but truth be told, had she had any sense at all, she wouldn't have gone out in the slushstorm in the first place.  MOUSES!

She found the stuff she needed at the store, paid for it and headed out.  By then it had stopped slushin'.  It was snowin' once more.  In fact, it had snowed enough that the peep had to clean off the car before gettin' back on the road.

Now one would think that Peep #1 would head straight home after that, right?  Wrong.  Sometimes I really wonder 'bout my peep.

She had two more errands to run so off to the mall she went.  She did what she needed to do there as quickly as she could, cleaned off the car AGAIN and then drove to the second grocery store. After racin' through the grocery store aisles, she was ready for home although she did have to stop and clean all the snow off the car once more.  MOUSES!

By this time is was dark.  Really, really dark and when I say really, I really mean, REALLY.  To the right and to the left of the peep, it was pitch black.  Not a thing could be seen.  It wasn't even six o'clock yet but if the clock in the car hadn't been tellin' her the time, Ol' Peepers would have thought it was well past midnight. 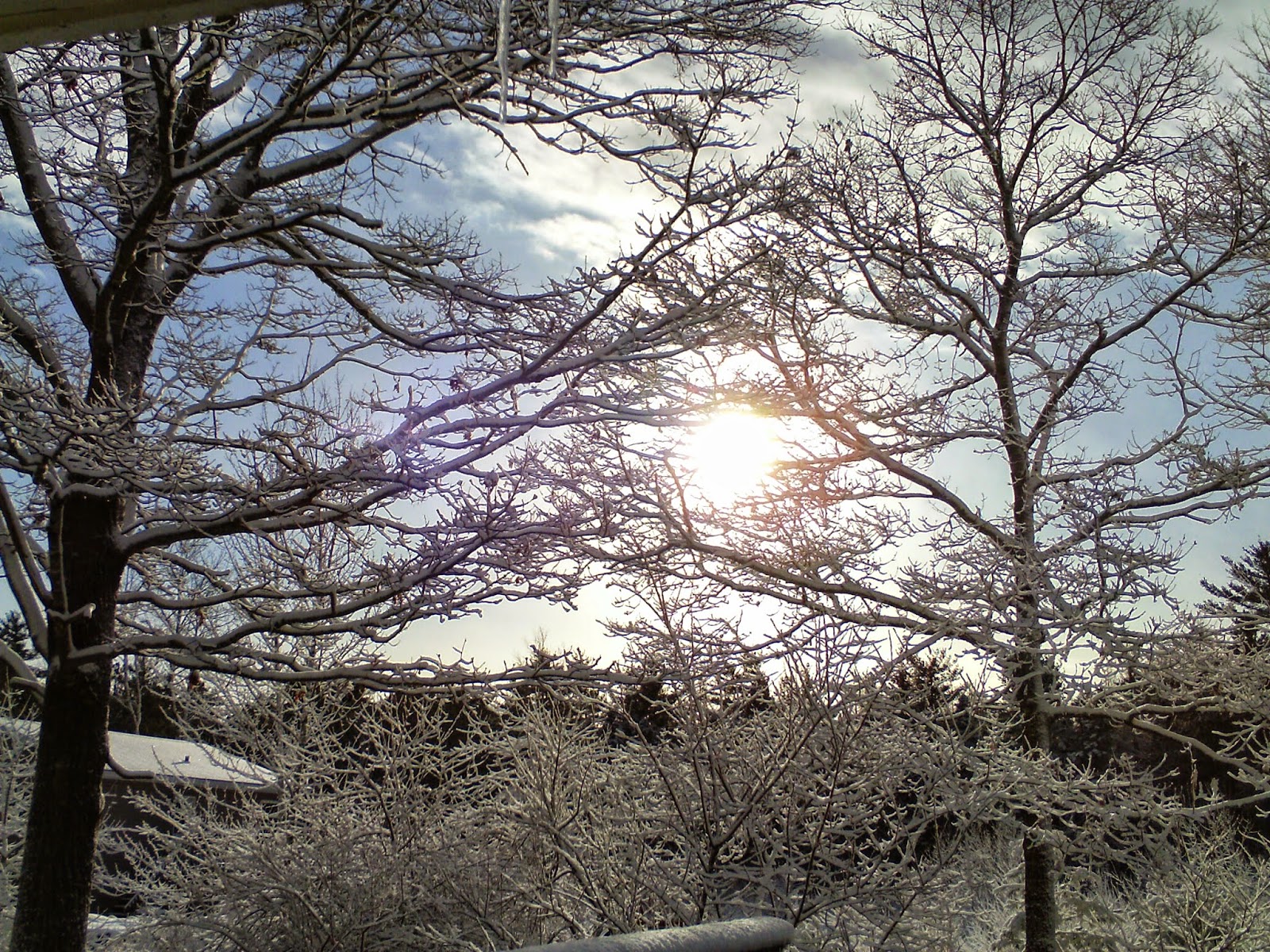 Slowly but surely the peep made her way home, eventually turnin' off the main road and into our subdivision. Inchin' her way home, she pulled into the driveway, stopped the car and headed inside.

The next mornin', I awoke to find the sun glintin' off white stuff in every direction.  It was really quite beautiful. A little on the cold side, though.  That's why I sent my sister, Tess, out on a reconnaissance mission.  I needed her to gather intel on the condition of the car.  I would have done it myself but like I said, it was cold.  Tess has more floof than I and floof, you see, helps keep a kitty warm.

Anywho...  Peep #1 had managed to return home with all parts of the car intact.  Well at least all parts that were there before she went out.  The car still had one side mirror.

A couple of weeks ago, Peep #2 was drivin' when apparently, someone's green bin jumped out into the middle of the road, colliding with the car.

What's that, Peepers?  FINE.  The green bin didn't actually jump into the middle of the road and collide with the car.  It just reached out from the side of said road and gave the passenger side mirror a swipe. The second peep told the first peep 'bout the incident but neglected to include the fact that the mirror had gone missin'.  Gone.  Gone as in it had disappeared off the face of the Earth in a puff of smoke.  Another has been ordered and will be replaced as soon as one of the peeps is in the town where the car doctor works.

There's no word on the health and welfare of the mysterious, car swipin', green bin.

Well that'll teach the green bin to mess with one of my peeps!

And speakin' of messin'...  The other day, I was workin' on my blog when I heard yowls and howls comin' from the front of the house.  I sent the peep to investigate. 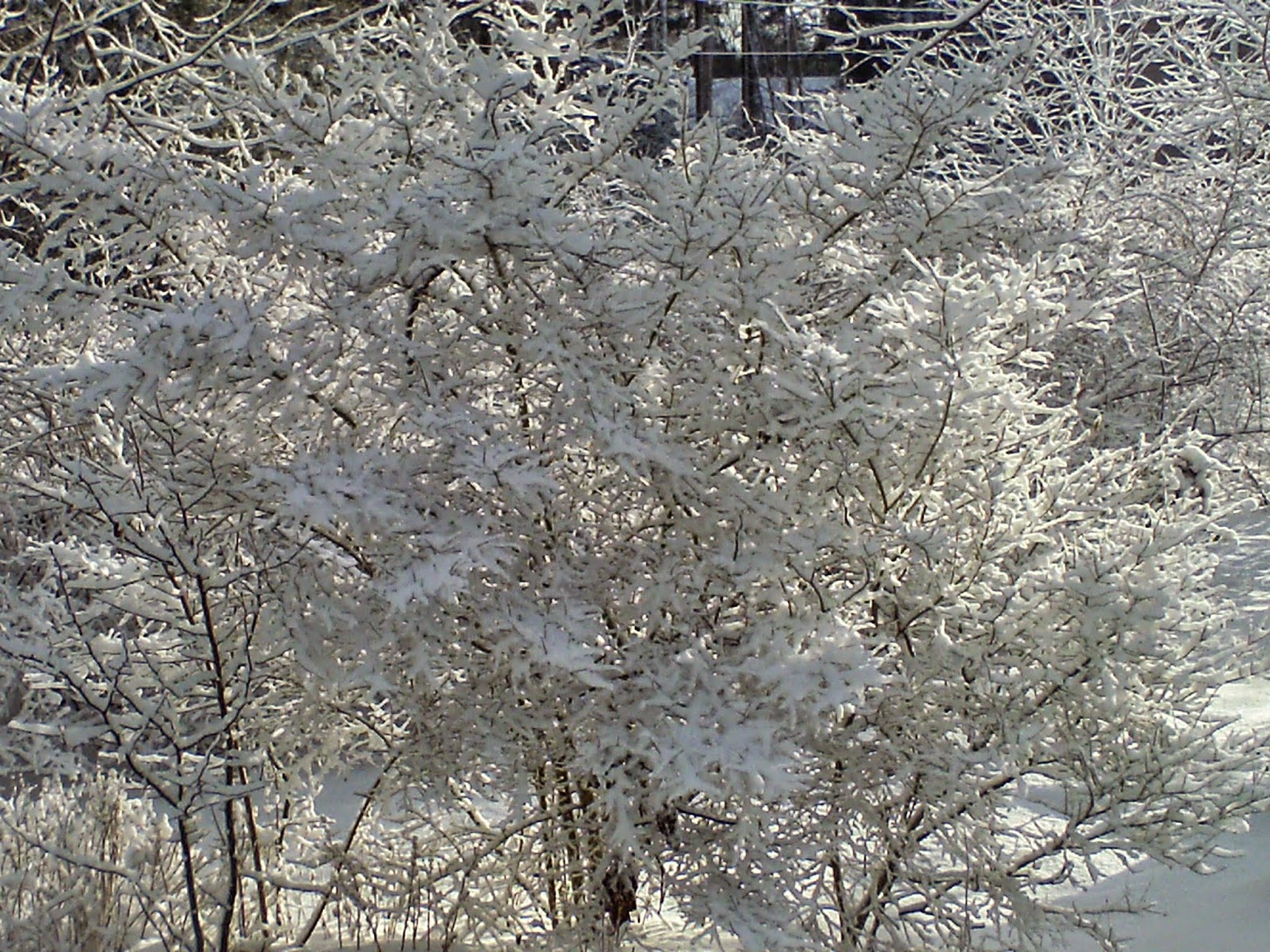 Peep #1 found my brothers, Seville and Anderson, both lyin' on the landin' leading upstairs with the small, two-and-a-half foot Christmas tree that usually stands on that landin'.between 'em.  The tree was lyin' down just like my brothers but the tree wasn't yowlin' or howlin'.  It wasn't growlin', either, unlike my brothers.

Apparently, marmie brothers don't always get along with one another.  It's a well-known fact that Seville and Rushton don't get along with each other and apparently, Seville and Andy don't, either.  Don't know who started this recent altercation but I can tell you this.  The innocent by-stander that was the small Christmas tree, took the fall...  LITERALLY.  Like I said, it was lyin' on the landin'.  Lyin' down.  'Cause it fell. Fell after bein' knocked down, is more like it.  MOUSES!
Posted by Seville at Nerissa's Life at 15:43