he meowed 'cause it was murder 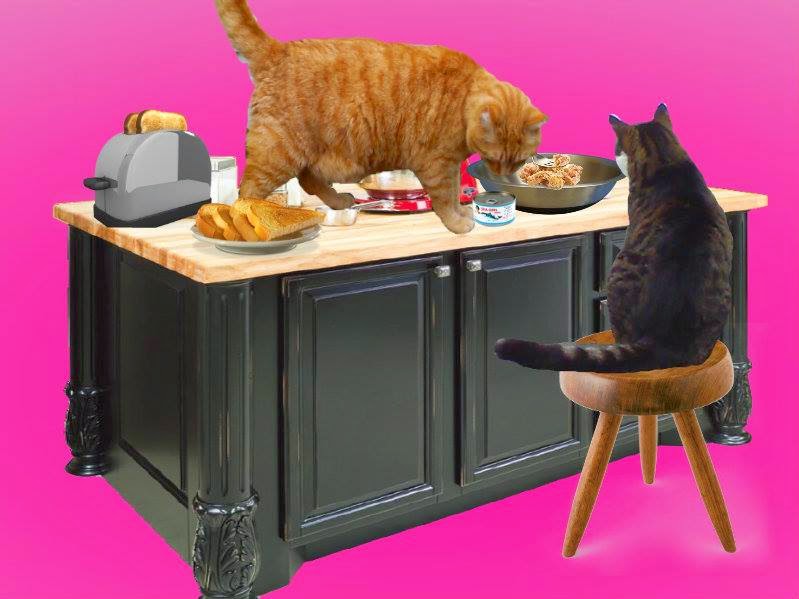 "Whatcha making there, Niss?  Something yummy?  It smells pretty yummy."  Seville hopped onto the kitchen island and sniffed about. Sticking his nose into the mixing bowl, he inhaled, deeply.

"You could say that, Seville.  I'm cookin' up a couple of Thin Man Tuna Melts for us."

"You mean like the tuna melts from the latest book we read for Kitty Lit. 101?  The book, Meow if it's Murder by T.C. LoTempio?"

"Exactly," answered Nerissa.  "The author, Toni, included a couple of recipes at the back of the book.  I thought this one sounded super yummy.  You wanna taste a bit of this mix and see what you think?"

Seville scooped up a pawful of the mixed tuna.  Bringing it up to his face, he breathed in the aroma. He licked the mix, tentatively, before breaking into a grin and licking his paw clean.  "Oh, that's good, Niss.  That's really good."

"I made a couple of minor adjustments," began Nissy.  "I left out the garlic powder and onion on account of those not bein' good for us cats and then replaced the celery with nip.  Partly 'cause I like nip and partly 'cause...  well...  Well really just 'cause I like the nip."

"Niss, the book said to follow the recipes exactly as written," Seville told his brother.  "You're not supposed to make changes."

Seville sat back on his haunches, waiting for his brother to turn away so that he could scoop up another pawful of the tuna.  Eventually, his impatience got the best of him.  "You know, Niss, you're not supposed to be up on the kitchen counters.  Does the peep know you're up here? Maybe we should just eat this tuna up so there's no evidence of your bein' up here."

Nerissa narrowed his eyes and pursed his lips.  "I'm not actually on the counter, Seville.  I'm sittin' on this here stool.  You're the one waltzin' around on the countertops.  MOUSES!" 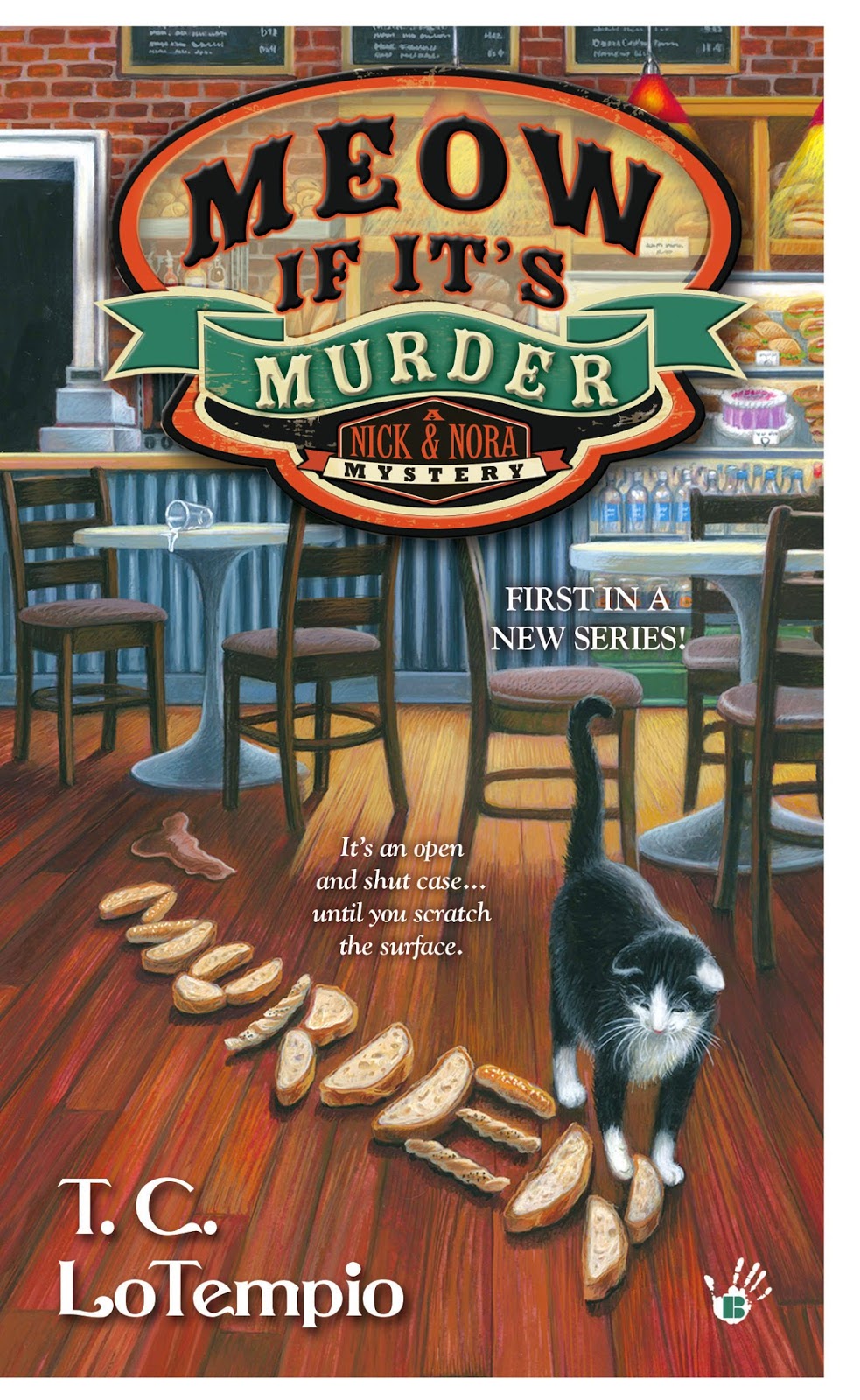 "Oh.  Yeah.  Darn," and Seville hopped down onto the floor. "When will those sandwiches be ready?  I'm gettin' hungrier and hungrier by the minute."

"Not long, Sivvers.  You finish your book report for Professor Lyon, yet?" Nissy asked his brother.  "It's due, tomorrow, you know."

"I know.  It's all done.  I just have to print it up."  Seville lay down on the kitchen floor in a sphinx pose.  "I really enjoyed this book a lot, Niss.  I was hooked by the end of the first chapter."

"At first," continued Seville, "I was wondering if I'd like it or not.  Well actually, I was wondering why the cover of the book was plain old pink.  No pictures of cats or anything.  I was wondering whether or not there would even be a cat in the book since there weren't any pictured on the cover. Remind me again why the book cover was just plain pink?"

"I told you before, Seville," and Nerissa let out an audible sigh, "the book we have is an ARC, otherwise known as an Advanced Reader Copy.  We got our copy straight from the author, herself. Meow if it's Murder won't be on the shelves until December 2nd.  The rest of the world has to wait to read it.  We got an early copy 'cause...  'Cause we're special, I think."

"NICE."  Seville closed his eyes and lifted up his nose, trying to get another whiff of the tuna melts Nissy was still preparing.  "Sounds like a good reason for the book cover to be plain without a picture.  But when it's available at the book stores, the cover will have a cat on it, right?  Maybe a marmalade cat like me?"

"Yes and no, Seville," and Nerissa snatched the pieces of toast from the toaster.  "There will be a cat, all right, but not a marmie cat like you.  Probably a tuxie on account of the hero of the book, Nick, bein' a tuxedo cat."

"Well I wouldn't go that far, Sivvers, but yes, he is a really smart cat." 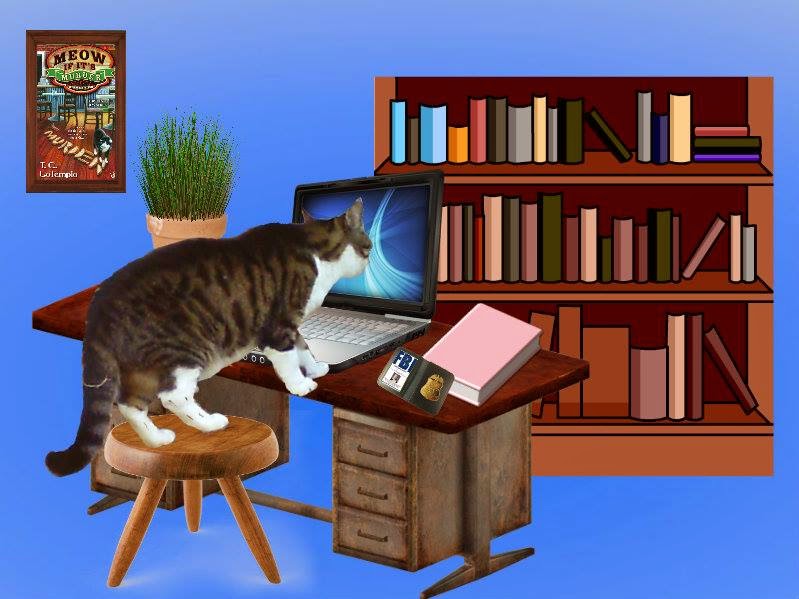 "Really, Niss?  Because I thought he was super smart.  He even knew how to use a computer.  At least he was able to turn it on for himself.  You know, not a lot of cats can use a computer, Niss."

Nerissa stared at his brother in disbelief.  "Uh, Seville.  You and I know how to use a computer.  We both wrote our book reports on computers.  I even have a blog, remember?"

"Oh yeah."  Seville drummed his claws on the floor.  "About those reports, you mention anything in yours about Nick and the FBI?  I was just a tad confused about which FBI was mentioned in the book.  Was it the real FBI or the cat one that you joined?"

"You mean the Feline Bureau of Investigation?" Having finished spooning the tuna mix onto the toast, Nerissa carefully placed slices of cheese on top.  "Could have been either, I suppose.  Both are equally legit.  I think."

"And in answer to your question, no."  Nerissa continued, "I didn't mention the FBI in my book report.  I wrote mainly 'bout how I loved Toni's style of writin'.  I loved how she referenced those older mysteries and movies and whatnot and, at times, even wrote usin' the same style you might find in some of them.  Readin' the book, I felt like I was right there, in one of those old, great movies.  The classic mystery-suspense genre movies and books..."

"Listen to you, Niss.  La-de-dah..." interrupted Seville.  "You sound just like Professor Lyon with his terminology.  He's going to eat that right up.  And speaking of eating, how are those tuna melts coming along?"

"Just a few more minutes on the melts."  Nissy sat back on his haunches.  "You know, some of those old references Toni used were quite ingenious." 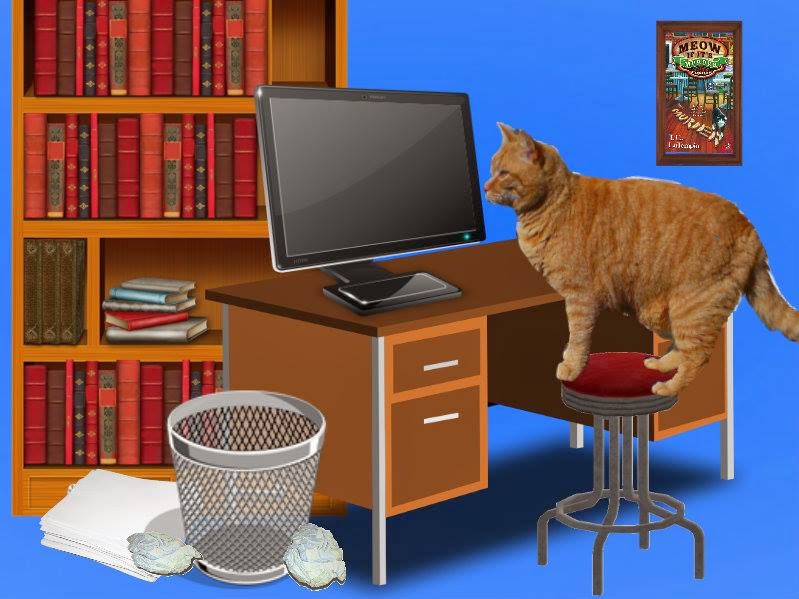 "I know what it means, Niss.  Which one did you like the best?"

"I liked the Columbo reference the best. Well she didn't actually mention Columbo by name but she did kind of reference him, indirectly.  Remember when Nora Charles was interviewin' Patti?" Nissy continued.  "Remember how she said, "Perhaps it was the alcohol," or somethin' like like.  She even rubbed at her temple.  Classic Columbo technique!  Pullin' somethin' out of nowhere to shake things up a bit.  Rattle a few cages and whatnot.  See what comes loose.  I can even picture Columbo rubbin' at his temple just like Nora did.  It was perfect."

"Oh yeah!  I remember that.  Hmmm..." Seville paused.  "I didn't write about anything like that in my report.  I mainly wrote about how Nick could use a computer and was maybe going to join the FBI because he knew how to play Scrabble."

Nerissa rolled his eyes.  "No one joins the FBI because they know how to play Scrabble, Sivvers! MOUSES!"

"But that's not why...  Never mind," said Nissy, cutting himself off.  "Never mind.  Lunch is almost ready."  Nerissa popped the Thin Man Tuna Melts under the toaster oven broiler before setting the timer.  "They'll be ready in a minute, Sivvers.  Come on," and he hopped down from the stool.  Let's go print up our book reports while the cheese is meltin'."

The two cats padded into Nerissa's office to pull up their reports. 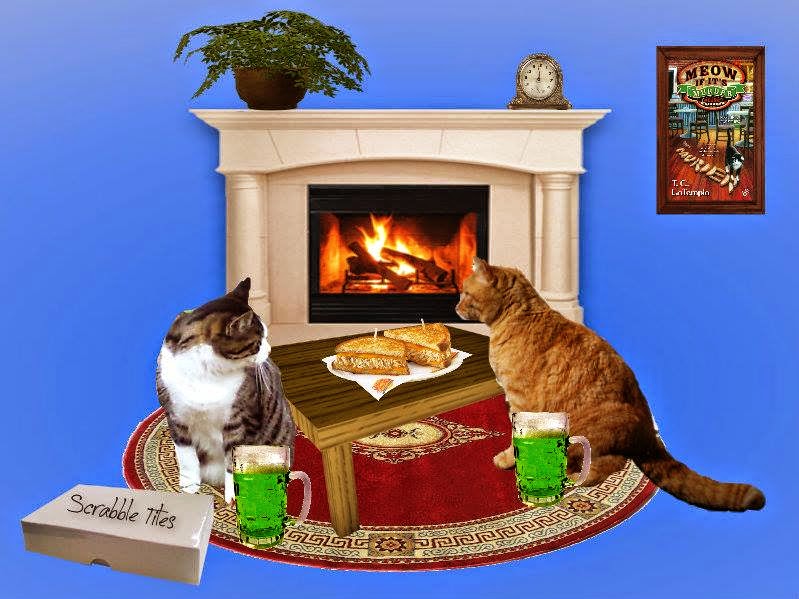 "You know what would be great with those tuna melts, Niss?  Nip beer," Seville said, answering his own question.

"Of course.  Nip beer is great with everything," replied Nerissa.  After we get our reports, you can pour us a couple mugs of the brew while I plate up our sandwiches. And after we eat lunch, I'd like to try my paw at a little game of Scrabble.  I've never played but sure am curious to try.  Might be fun, huh?

"Of yeah, I think it will," answered Seville.  "But not as much fun as those tuna melts are gonna be delicious.  The smell of them cooking is making me drool already."

Meow if it's Murder is the first book in the Nick & Nora Mystery series written by author  T.C. LoTempio and published as a Berkley Prime Crime Mystery by the Berkley Publishing Group, a division of the Penguin Group.  Connect on-line with Toni on her Facebook page Toni LoTempio or on Twitter at @RoccoBlogger.  The cover picture was used with the permission of T.C. LoTempio.

Although Seville and I did receive a free, Advanced Reader Copy of Meow if it's Murder, along with several really nice bookmarks showin' the cover of the book, those gifts did not - in any way - influence the opinions expressed in this blog post.  We enjoyed the book, free or otherwise and that's a fact, for sure.  MOUSES!

Posted by Seville at Nerissa's Life at 14:01