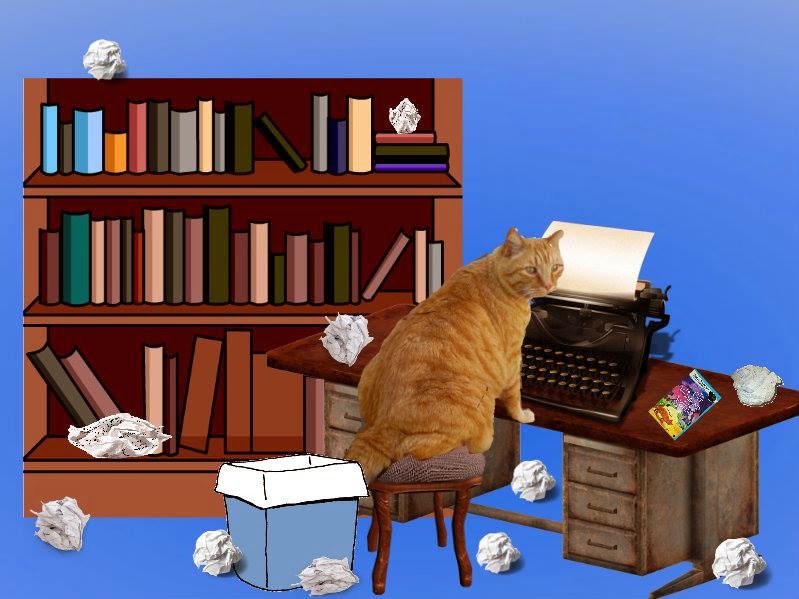 "How's the ol' book report comin' along there, Sivvers?" asked Nissy as he padded into the room. "You finished, yet?"

Seville triumphantly pulled a sheet of paper from the typewriter with a flourish.  "All done. Whew that was hard but I'm really pleased with the result.  Pretty sure Professor Lyon will give me an A on it.  Maybe even an A plus."  Seville sat back on his haunches, smiling to himself with satisfaction.

"Lemme see that, Sivvers," and Nissy snatched the paper from Seville's paw.  "I'll check for spellin'...  MOUSES!  That's not a book report, Seville.  What were you thinkin'?"

"And a whole whack of other stuff, too, Seville."  Nerissa stared down at the piece of paper he held in his paw and what was written on it.  It's a book about me.  About me, Seville.  The end.

"No way, bro.  Look closely at all those periods," and Seville pointed each one out to Nerissa. "Three periods.  That means, three sentences.  Of course, that's assuming the words 'the end' count as a complete sentence.

Nissy shook his head in disbelief.  There weren't enough cries of MOUSES! in the world to cover this sort of incompetence.

Nerissa glanced around, noticing the multitude of crumpled-up papers strewn about the room.  "You went through all that paper just to type three sentences?" 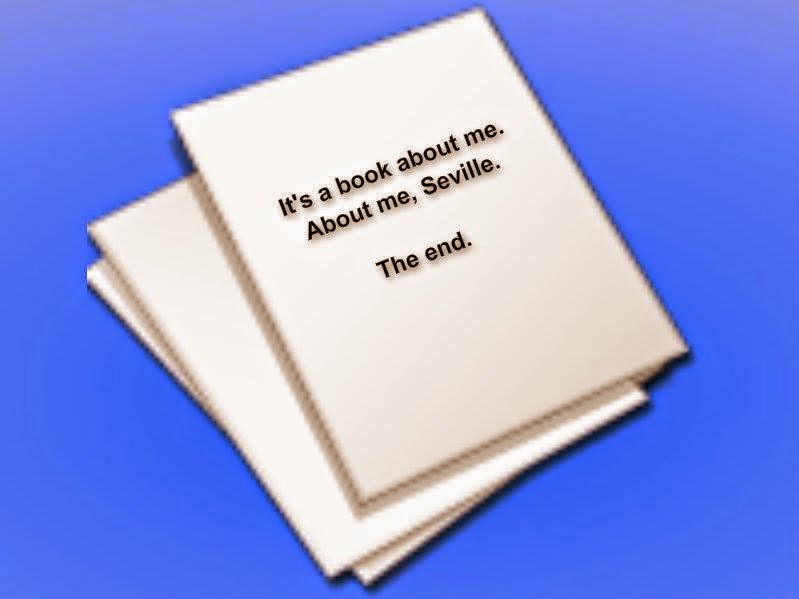 "Had some typos," Seville explained.

Nissy rolled his eyes.  Sighing loudly, he began, "First of all, you've gotta prove your point.  Secondly, I'm not sure your point is even valid."

Narrowing his eyes, Seville asked, "You saying you don't think your pal Leann Sweeney wrote The Cat, the Vagabond and the Victim about me? REALLY?  Well I beg to differ, Niss.  I was clearly the inspiration for the main character, Clyde."

Seville stuck out a claw and stated, "Clyde is a marmalade cat, just like me."  Revealing a second claw, he said, "He's also a big marmalade cat...  just like me.  I weighed in at sixteen pounds last doctor's appointment."  A third claw emerged and he added, "Plus, he's a vagabond."

"You even know what the word vagabond means, Sivvers?" Nissy asked.

"Of course I do!" Seville scowled.  "Means he moved about.  Wandered.  Clyde travelled two hundred miles, all on his own, just to get back to his house.  That makes him a vagabond."

"I, too, was a vagabond," continued Seville.  "Remember?  I arrived here one December day after wandering for miles and miles upon..."

"Peeps think you got stuck in a movin' van and were brought here accidentally," Nissy interrupted. "You didn't wander on your own to get home.  You just landed on our doorstep and made yourself at home.  MOUSES!"

"Point is, I vagabonded," Seville muttered.  "Ummm...  moved about.   Not sure vagabonded is a word, to be honest."

"Seville, the marmie cat in Leann's book is super smart."

"MORE proof that Clyde was inspired by me," smirked Seville. 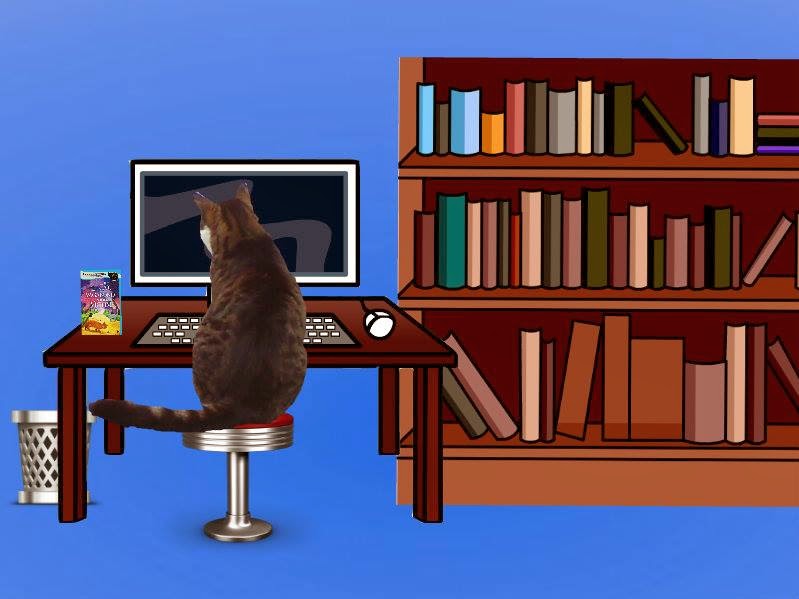 "Not exactly, Sivvers," and Nissy pursed his lips together.  "As I was sayin', Clyde is super smart. He's really the hero of the whole book. Not only does he solve the crime but it's because of him, that everyone figures out that a crime has even been committed."

"What do you mean by not exactly, Niss?  You insinuating I'm not super smart?"

"Not exactly insinuatin' it, Sivvers.  Anywho...  If it weren't for Clyde there would be no story," continued Nerissa.  "Clyde knows somethin' is up and travels all those miles only to find that the person he loves more than anyone in the world has died.  I must admit, had a few tears in my eyes when I read 'bout that."

"Me too, Niss.  But then Clyde became so famous and everyone wanted to meet him.  That's when he ended up staying with Jillian, right?  Clyde got to meet Merlot, Chablis and Syrah.  Lucky guy. Those cats are really cool."

"They sure are.  Jillian is pretty cool, too.  She kept Clyde safe from the press at first and then from the bad guys."

And speakin' of bad guys," continued Nissy, "I didn't have a clue about who the killer was until it was revealed.  I couldn't figure out the murder at all.  Leann's really good 'bout keepin' a reader in suspense.  It's like that in all her books."

"I know this is off-topic but what did you think about the GPS stuff?" Seville asked his brother.

"Oh gosh, that had me worried.  Don't need the peeps gettin' ideas like that.  Gonna have to have a little chat with Leann 'bout that.  Imagine tellin' the whole world there's such a thing as a GPS collar for cats?"

"I know!" exclaimed Seville.  "Peep #1 has threatened to use one of those on Tess more than once. I always thought she was joking as I didn't know they actually existed but it looks like Tess might be in for a surprise.  Has the peep read the book yet?" 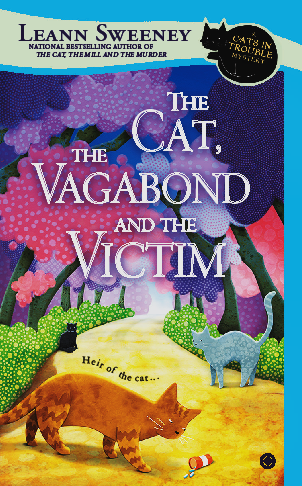 "If the peeps put one of those collars on you, Niss, they'll figure out exactly where your chipmunk pals are living."

"You put that in your book report for Professor Lyon, Niss?"

Seville hesitated for a moment before asking, "Do you really think my report should be a little longer?  You really think the one I wrote won't get an A?"

"I really think we need to get you some more paper for that typewriter.  On second thought, why don't you come on over to my desk and we'll work on this together.  You can use my computer.  Perhaps we'll save a forest or somethin'," and Nerissa kicked a balled-up piece of paper across the room, with a paw.  "You sure do make a lot of typos.  All those typos and only three measly little sentences," and he hopped up onto his chair, shaking his head in dismay.

The Cat, the Vagabond and the Victim is the sixth book in the Cats in Trouble Series written by the National Bestselling Author, Leann Sweeney and published as an Obsidian Mystery, a trademark of the Penguin Group.  Connect on-line with Leann through her website, Leann Sweeney, Facebook page Author Leann Sweeney or on Twitter at @LeannSweeney  The cover picture of Leann's book was used with the permission of - you guessed it - Leann Sweeney.

Posted by Seville at Nerissa's Life at 12:41

Email ThisBlogThis!Share to TwitterShare to FacebookShare to Pinterest
Labels: book report, Cats in Trouble Mysteries, kitty lit. 101, Leann Sweeney, The Cat the Vagabond and the Victim