Have you ever had an unwelcome house guest?  We did.  Boy, we sure did and his name was Arthur.  He arrived uninvited and he stayed WAY PAST his welcome.  Bad Arthur, bad.  MOUSES!

Last week, the weatherpeeps were all talkin' about this rotten dude named Arthur.  Hurricane Arthur, to be exact. He was travellin' up the eastern seaboard and, I think, expected to pass just south of my fair province of Nova Scotia.

Well, that was last week.

In the wee hours of Saturday mornin', Arthur arrived.  Even though downgraded to a tropical storm, he was still packin' a punch.  The wind was a-howlin' and the skies were a-scowlin' but by mid-mornin', it seemed to be okay.  Weatherpeeps were still sayin' the entire entire province had a tropical storm warning but really and truly, we seemed to be okay.  We figured we had weathered the storm. WRONG!

Maybe we were in the eye of the storm or somethin'.  I don't know.  What I do know is that an hour or so later, Arthur was back and with a vengeance.  He was blowin' with all his might and you should have seen the trees swayin' and whatnot.

I was sittin' at the computer, workin' on my blog, when I heard bang!  BANG!  BANG!  It sounded a lot like when Ol' Peepers here is unloadin' bags of manure for the garden, from the trunk of the car, and dumps 'em on the driveway.  But the bangs were way too close together to have been caused by that.  Plus, there was hurricane - okay, tropical storm - wrecking havoc in my yard and although I did wonder, I decided that not even my peep would be so silly as to be outside in the middle of a storm like that.

I immediately ran from my office over to the front door to investigate.  I found both the peeps there, lookin' over at the neighbours' house.  Apparently, the neighbours were playin' with fireworks or somethin'.  At least that's what it looked like but in reality, it wasn't the neighbours at all.  The power pole between our house and theirs was on fire!  There were sparks flyin' everywhere and poppin' and cracklin' noises.  No flames but lots and LOTS of sparks.  Kind of scary, actually.

Peep #1 immediately went into action.  She got on the phone to tell Nova Scotia Power what was goin' on but she couldn't get through.  She tried again.  No luck.  She tried once more.  NOTHIN'. We still had power and everything but even the peep realised that power poles are just not supposed to do that sort of thing.  MOUSES!

She had almost all the soap and stuff rinsed out of her hair when everything went dark.  Yeah... when you think about the flamin' power pole puttin' on the fireworks display, it was really just a matter of time.

She dried off best as she could and came downstairs.  Shortly afterwards, the power came back on. Yay!  Shortly after that, it went out...  again.  MOUSES!

This time, Peep #1 got through to the power company and they said that power would be restored by 11:30 that night.  Not fun but manageable.  Even for peeps.  But by mornin', there was still no power but supposedly, it would be back by suppertime. 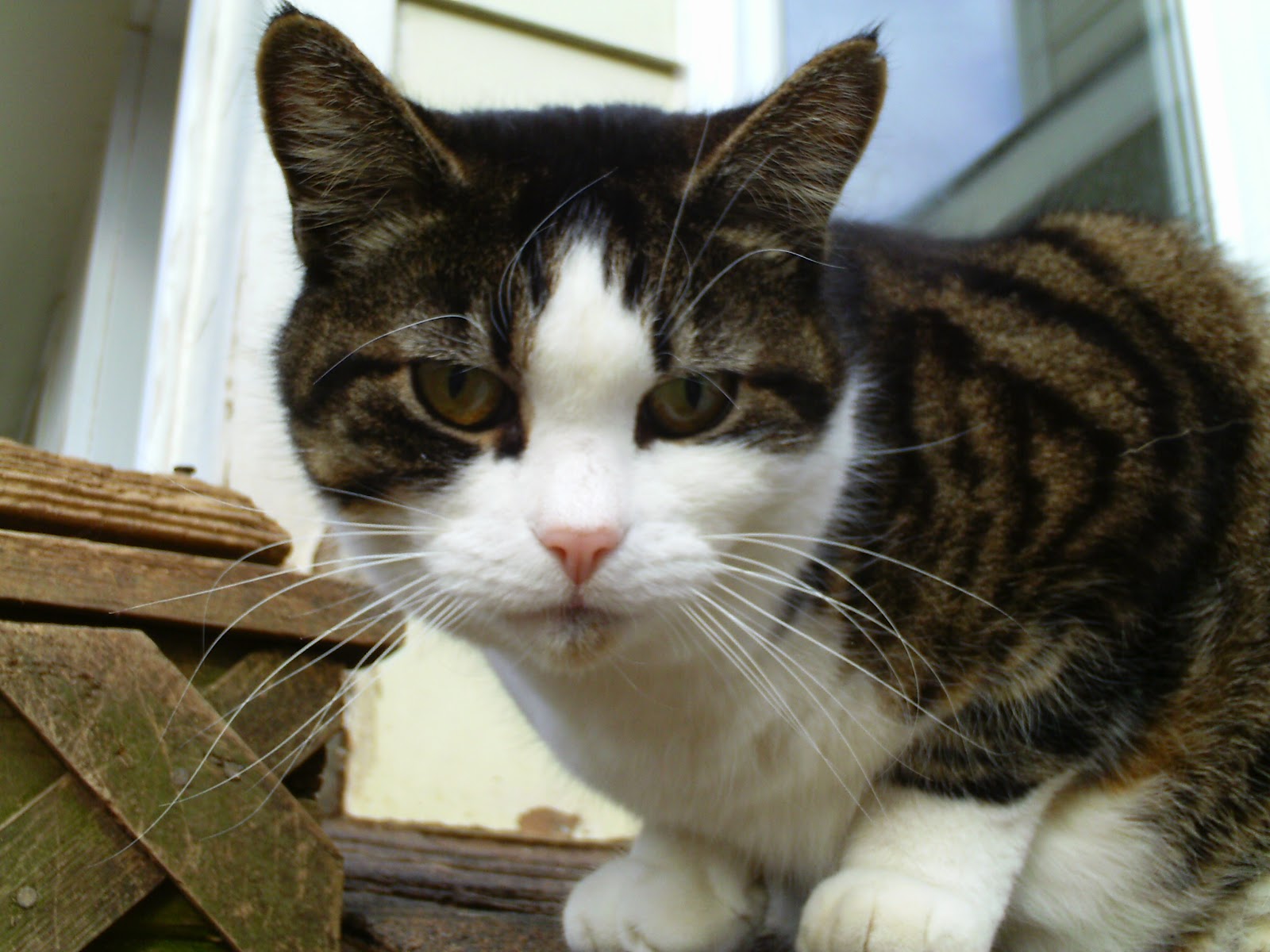 The peeps headed outside to check on damage and whatnot.  I helped.

There were little twigs with leaves everywhere.  The peeps raked some of 'em up into piles but, I've noticed, the piles are still there, scattered around my front and back yards.  Apparently, it was gettin' too hot to rake any more. Plus, they were cranky 'bout the lack of power.

We were really lucky though 'cause the house at the end of the street had more than twigs fallin' on the lawn.  A whole tree fell on their house!  Everyone is okay, I think, but it must have been super scary.  Can't imagine what one thinks when a tree falls on your house in the middle of the night.  MOUSES!

Anywho...  Suppertime passed and there was still no power but it would be back before midnight. But by Monday morin', there was still no power.  They said it would be back by midnight that night and actually, by early evening, it was...  for some.  All the streets around us had power but the seven houses on our street were left in the dark.  I was beginning to think they had forgotten about us.

Peep #1 got on the phone to find out when our power would be back and they told her...  "I'm sorry Ma'am, but we're looking at Friday."  FRIDAY!  Friday?  MOUSES!

I studied my peeps closely and knew that this was not good.  They were barely holdin' onto their sanity as it was and another three, four days without power was gonna do 'em in, for sure.  I didn't think they were gonna make it.

By eleven-thirty Monday night, we had gone well over two days with no power, no water, no Internet, no nothin'.  Plus, the peep hadn't had coffee since Saturday mornin' and you can just imagine how scary that was.  And I had missed my Sunday blog post!  First time that I've ever missed a blog post. Was I going to miss Wednesday as well?  I sank back on my haunches, debating whether or not I should cry.  Eventually, I decided to wash my tail, instead.

Tuesday was a day I would rather forget.  We were half-way through this misery of miseries but whether we'd ever live to see the other side was questionable, at best.  We cats had bottled water in our bowls but were being served our meals on paper plates.  PAPER.  Yeah...  that's what I said. Peeps couldn't do any washing-up, you see.  The floor upon which we dine hadn't been washed in days.  It was a disgrace.  I was beginning to wonder if I would make 'til Friday, myself.

Then it happened.  Early this mornin', even before the sun got up, miracle of all miracles...  THE POWER CAME BACK ON.  I was jumpin' for joy.  Okay, I actually kind of slept right though it but I understand that Ol' Peepers here did a little jig.

And the peep was gonna have coffee!  What's that Peepers?  You haven't had any coffee yet this mornin'?  Oh yeah...  The fridge was off for three and a half days and the milk is all sour.  Hmmm...   Well, that certainly explains that rather frazzled expression on your face.  I was actually wonderin' about that...

Tell you what Peepers.  Once we get my blog post published, you can go empty out the stinky fridge and scrub down the kitchen floor and bathrooms Once that's all done, treat yourself to a shower and then head on over to the store to get some milk for your coffee. I'm almost done with my post.  One second...  Hmmm...  Yeah...  that's it.

Okay Peepers, you can go clean up the kitchen now.  After the terrible ordeal of the unwanted house guest who overstayed his welcome, I'm kinda tired. Think I'll take a nap or somethin'.  A nap sounds really good.  Wake me in an hour or two, would you?  On second thought, never mind.  I'll wake myself up when I'm good and ready 'cause you know...  I'm a cat and that's the kind of thing that we cats do.  MOUSES!

Posted by Seville at Nerissa's Life at 13:06