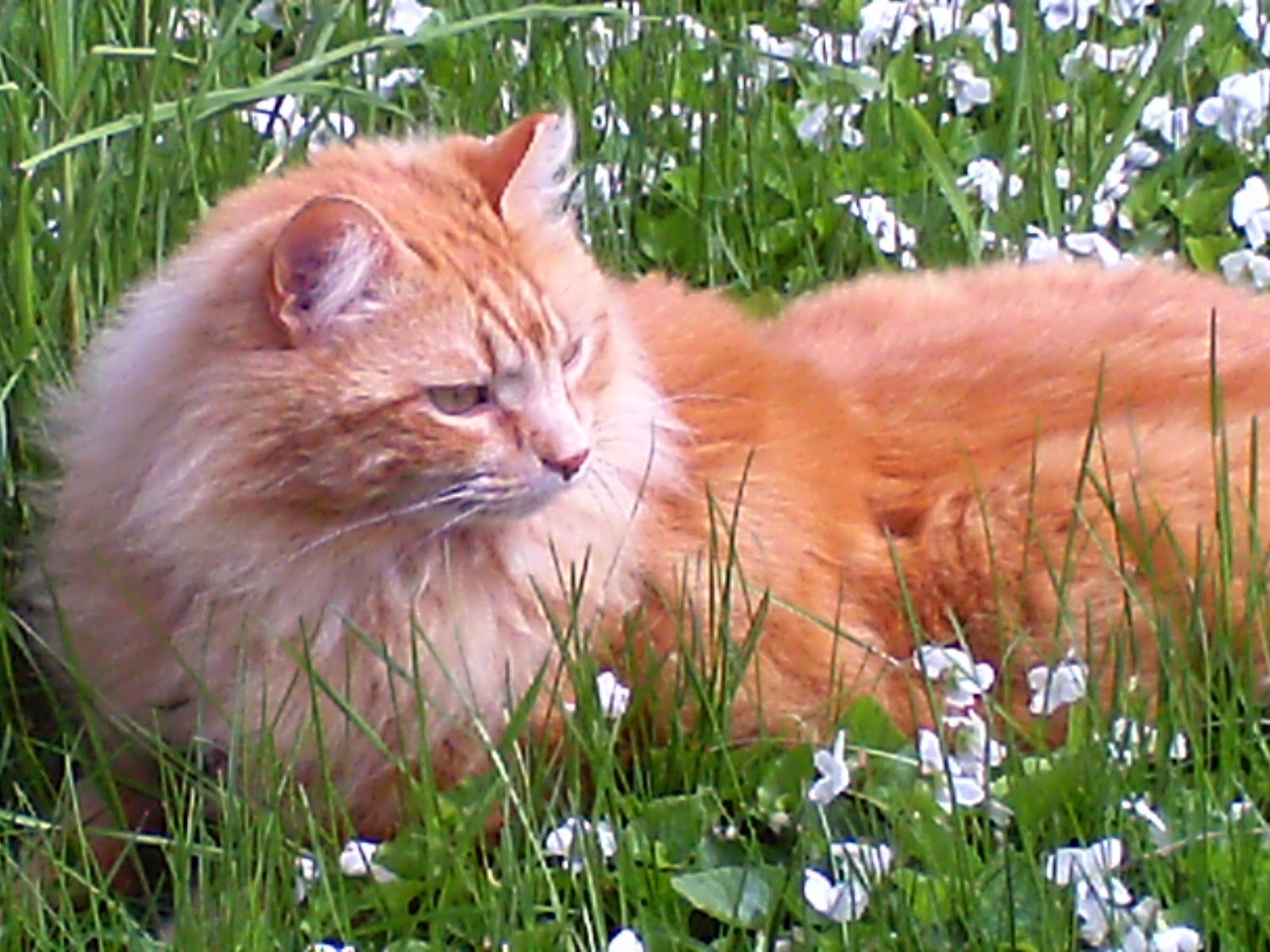 My two marmie brothers had to see the doctor last week.  Don't worry, it was nothin' serious.  Just annual check-ups and whatnot.

Peep #1 was torn between takin' Rushton and Seville together or takin' them separately.  Together, they're quite an impressive pair.  Both big and handsome marmalade boys.  On the other paw, they also kind of hate one another.  Would takin' them together wreak havoc at the doctor's office?  It was always a possibility but the peep decided to chance it anyway.

I've blogged about those two and their personality differences before.  Nothin' Rushton and Seville like more than gettin' up into each other's business, nose to nose and all personal like and then lettin' loose with the howls and growls and who knows what else.  Well I know what else.  Once, Peep #1 went downstairs after one of their little marmie incidents and found chunks of marmalade fur all over the place.  Seville claimed that Rushy was just sheddin' and although Rushy does shed a lot in the spring, I really don't think his fur comes out in chunks like that.  At least not when simply sheddin'.  MOUSES!

So the decision was made that my marmie brothers would go to the doctor, together.  Peep #1 got out the carriers and put fresh towels in them.  The towels were spread out nicely for comfort.  Then she went in search of marmies.

Rushton was the first to be found as he happened to be snackin' in the kitchen.  The peep picked him up and proceeded to encourage him to enter the carrier.  Nothin' doing.  No way, no how, was that brother of mine going inside.  Peep #2 had to be called in for reinforcements.  The second peep held the carrier upright and, of course, the towel laid over the bottom of the carrier fell to the back where it remained and was pretty much useless.

With the carrier still in an upright position, Peep #1 attempted a drop insertion, tail-end first, of my brother.  Well Rushy grabbed hold of the edge of that carrier and held on as tightly as a cat can hold which, believe me, is pretty darned tight.  The peep lifted one paw only for Rushy to hold on even more tightly with the other and, I'm told, he was bracing his back legs within the carrier, preparing for a vertical escape.

Peep #1 was just about to give up on the carrier business.  Not only was Rushton simply unwillin' to go into it but Ol' Peepers was beginning to question whether or not he would even fit!  Did I happen to mention that my brother Rushy is a rather big boy?  Well he is and let me tell you...  floof and big bones can only account for so much, you know?

But then, miraculously, Rushy let go of the edge of the carrier for just a second.  I think he was tryin' to get a better grip or somethin' but Peep #1 was on the ball, I tell you.  Seizing the opportunity, she stuffed my marmie brother into the carrier.  Tight squeeze but he made it...  FINALLY.

So the peep then went off in search of Seville.  She found him outside.  Sivvers, bein' a rather co-operative kind of guy, came immediately when she called him.  He was likely hoping there might be a snack in the offing.

Peep #1 encouraged him to enter the second carrier, head first, with a gentle SHOVE to his butt but Sivvers was havin' nothin' of that.  So once again, the second peep's assistance was required and the carrier was held up on its end only for its towel to fall to the back where it was utterly useless, just like Rushy's towel. 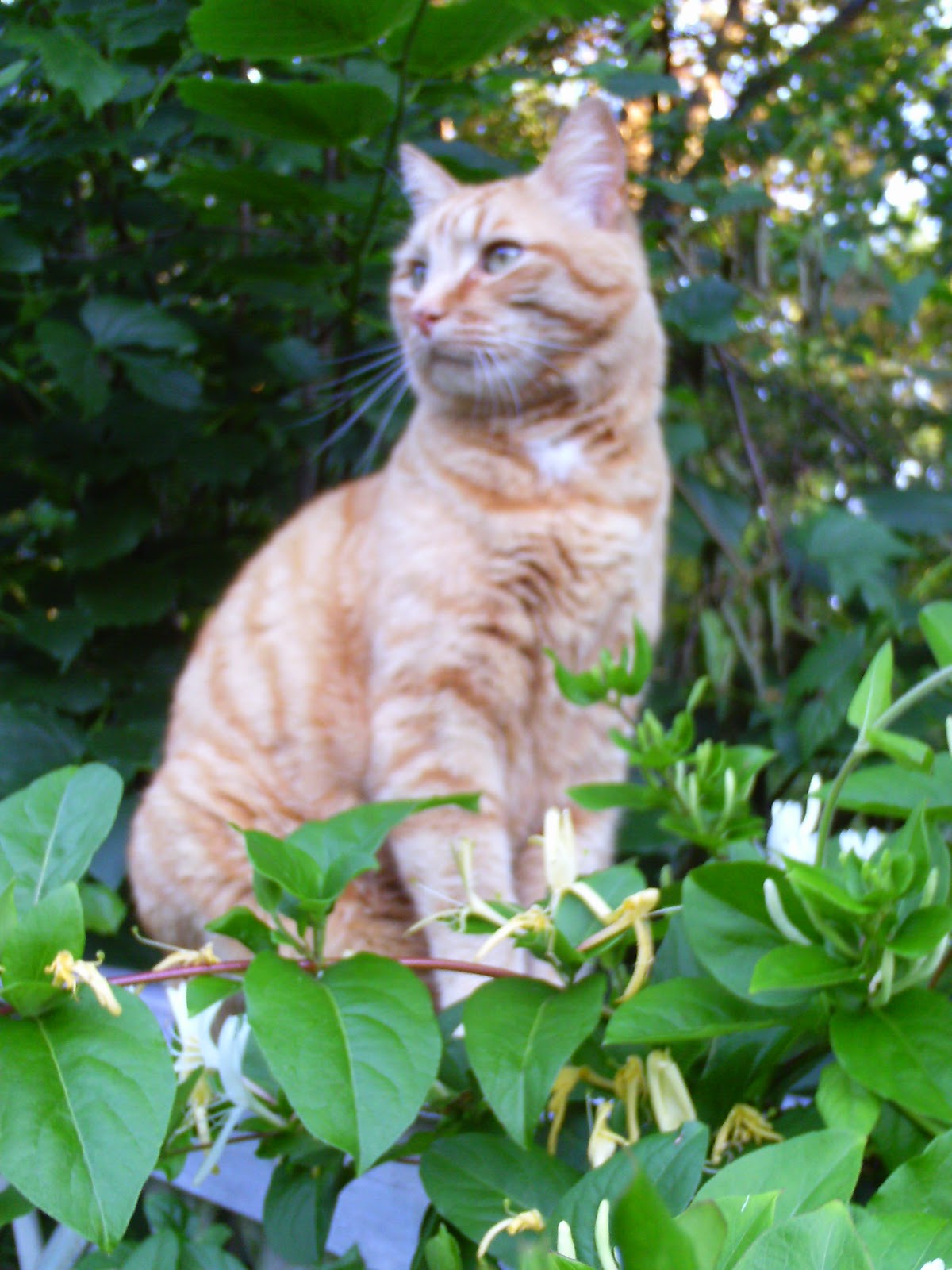 The tail-first drop insertion method proved to be much more manageable with Seville and within five minutes, he was in.  You're probably thinkin' that five minutes is a long time to take to get a cat into a carrier but believe you me, it took a lot longer than that to get Rushy in.

Watching from a safe distance, I looked over at the clock and noted that the peeps were already late for the marmies' appointments and they hadn't even left the house yet.  MOUSES although, to be honest, typical.

Peep #1 attempted to pick up the two carriers.  It wasn't easy.  I think she thought she was liftin' weights or something but eventually she managed it and they were off.

Now the rest of the story I did not witness first-paw however the peep took notes for me and I trust her note-taking abilities.  Anywho...

My brothers were ushered - or rather, carried in their carriers - into the exam room.  Seville refused to exit his carrier.  This is pretty much the norm when we visit the doctor and the peep has become quite competent at takin' apart the carrier so that the top half is simply lifted off.  Puttin' the carrier together afterwards still eludes her, however.

Once Seville had been removed from the carrier, his temperature was taken and his weight, calculated.  Sixteen pounds.  MOUSES!  Really big mouses.

Then the nurse wanted to see Rushy.  Hmmm...  That would require havin' Rushton and Seville both out of their carriers at the same time.  Clearly, the peep had not thought this through.  It was suggested that Seville could go back into his carrier while she checked on Rushy but Seville's carrier was still in pieces from the peep havin' had to take it apart and what's more, even if they put it back together again, they would have a devil of a time, gettin' him back out when the doctor arrived. Decisions...  decisions...

Finally it was decided that they would risk havin' both boys out together.  Rushy's carrier was dismantled and he was lifted out.   His temperature was found to be normal and his weight was calculated.  Seventeen point six pounds?  MOUSES, Rushton.  You eatin' the plates as well as the food these days?

When the doctor arrived, Seville and Rushton were both on the exam table, being held at opposite ends.  Somewhat unbelievably, there was no chaos.  There were no howls and no growls to be heard.  There were no nose to nose confrontations going on.  I know they were bein' held at opposite ends of the table but those exam tables aren't that big.  There couldn't have been a lot of space between the two.

The doctor examined each of my marmie brothers before giving them their vaccinations.  All remained peaceful and calm.  Seville had one little clump of fur near his tail that needed attendin' and the doctor combed that right out.  He was lucky our doctor did it 'cause Peep #1 would likely have snipped it.  Yeah, she would likely have taken the easy way out, for sure.

On the other paw, Rushton had some matted fur in the tail area that needed to be dealt with immediately.  The doctor used the shears or clippers or whatever and mounds of fur were left on the table.  By the way, a couple of days later it was somewhat damp and chilly outside and you should have heard the complaints emanating from Rushton 'bout how his bum was feelin' a draft.  MOUSES!

This peace between my brothers would NEVER have happened at home but apparently, when visitin' the doctor together, those two marmie brothers are quite capable of bein' well-behaved.  Who knew? A thought crossed Peep #1's mind but she didn't want to say it aloud however, the doctor did.  The doctor said right there and then that my brothers had untied against a common enemy...  HER. MOUSES!

Peep #1 is thinkin' that she will continue to take the marmie boys for their yearly exams together however, she's also thinkin' that she's gonna have to get bigger carriers in order to do it. Either that, or let them walk in on harnesses but I can tell you right now that neither one of those boys will be wearin' the harness that was bought for me when I was recuperating after havin' my knee bionicized.  They wouldn't fit! Nope, Ol' Peepers is gonna have to look into gettin' bigger harnesses. Maybe harnesses sized for dogs or somethin'. Anyone know what size of harness a Great Dane takes?  Maybe those would work for my marmie brothers.  Maybe...   MAYBE...  Yeah, that size might do the trick.

***  I just wanna let everyone know that even though my marmie brothers weighed in at sixteen and seventeen point six pounds, the doctor did not suggest that they go on diets.  In fact, Sivvers is already on a special diet on account of his crystals issue which has not reoccurred in well over a year and it's extremely important that the crystals are kept at bay.  Gotta pick your battles, you know?  And neither of the boys eats all that much.  At least, no more than the rest of us.  They're just big cats, we think.  Very big, indeed.

Posted by Seville at Nerissa's Life at 13:59