the plantin' of primroses 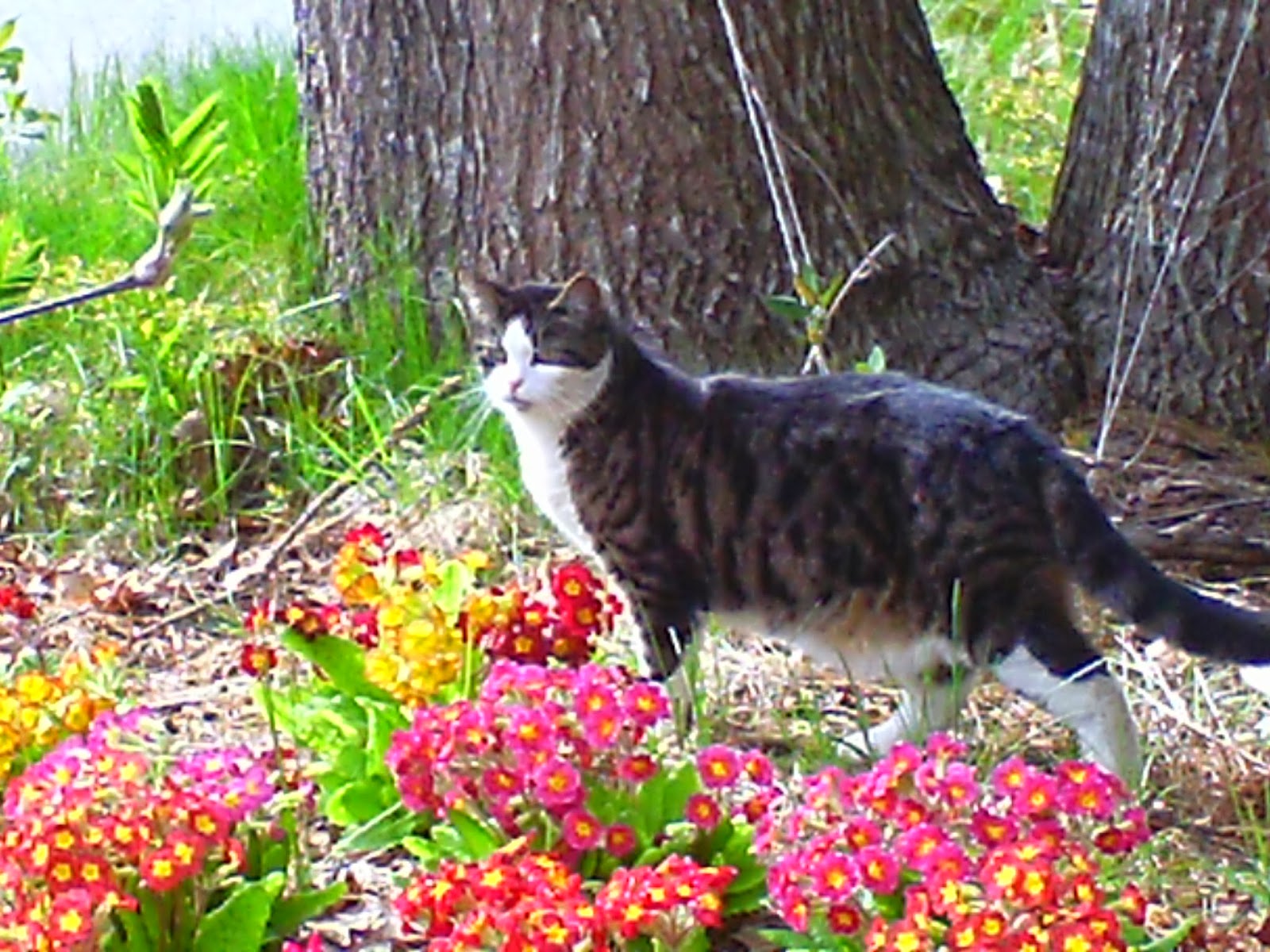 You know...  Peep #1 grows primroses like I build teleportation devices.

Whenever I see Ol' Peepers goin' through the house, scrounging around, gathering up things you normally wouldn't gather up together, I know she's up to somethin'.  Up to somethin' like plantin' primroses.  Not that long ago, I witnessed just such an event.

Ol' Peepers was diggin' in the kitchen drawers and cupboards lookin' for scissors and plastic wrap.  Then she found some black electrical tape and a marker in the basement.  When I saw her bringin' empty old coffee tins in from the garage, I figured she was up to no good.  When I saw her with a hammer and a nail, I knew she was up to no good.  Once I saw the plant tags, watering can and potting mix, I knew she was plannin' on making a mess.  The evidence was all there.  One plant-related mess was on its way, for sure.

The peep is really good at making messes.  She does it quite often and you know what they say. They say, practise makes perfect.  Well the peep has had a lot of practise with makin' messes so she makes them really well.

As I watched Ol' Peepers with her plastic wrap and electrical tape, I realised she was just an eggbeater and frying pan short of a teleportation device.   Throw in a whisk and she might manage a time machine.

It's at times like this when I realise that the peep isn't nearly as dense as she appears.  She actually has the makings of a fairly decent engineer in her.  Not quite there, though.  She has no grasp of the math required to fully understand the physics of egg beater-whisk time travelling-teleportation physics.  Complicated math like that really is best left up to us cats.  We understand it, instinctively.

Anywho...  you're probably all wonderin' what plastic wrap has to do with primroses.  Let me explain.

Every winter, the peep does the same thing.  When it's cold and snowy outside, she plants primrose seeds for my primrose garden.  I really do appreciate her planting the primroses 'cause, to be honest, I look really good posin' among them when they bloom.  They just sort of suit me or somethin'.

The first part of plantin' primroses is the noisiest part.  With the hammer and nail, she makes holes in the bottoms of all the coffee tins.  I am told that due to an impending shortage of coffee tins, this part of the process may no longer be needed.  Apparently, the kind of coffee she used to buy switched from bein' packaged in tins to bein' packaged in little bags.  Since the only reason she liked that particular brand of coffee was to gain access to the tins, she switched brands.  Alas, this new brand is also packaged in bags.

I can't imagine switchin' from my favourite brand of food just because of a change in packaging.  As long as the food inside is the same, I would be fine with it.  Peep #1 had better not get any ideas about switching my food so as to give her access to tins for the plantin' of primroses.  I like the primroses and all but I don't like them well enough to interfere with my meals.  Doin' something like that would be crazy.  Crazier than a squirrel makin' nut pies kind of crazy.  The peep had better come up with a new tin acquisition plan right away and that plan had better not have anythin' to do with the enjoyment of my meals, if you know what I mean.

But I digress.  Back to the peep's plantin'.

After she makes the holes in the the coffee tins, Peep #1 fills 'em up with potting mix.  She then soaks all that mix really well before squishin' it down - just a teeny bit - with her hand.  She usually gets her hands all dirty doin' this and then has to go wash 'em.  Like I said before, the peep messes stuff up really well.  She's even capable of messin' up herself!

The next step is to sprinkle the seeds on top of the potting mix.  I am not allowed to help with this part which I find to be extremely unfair.  Peep says the seeds are too small for me to be gettin' my paws in there.  I say, my paws are a whole lot smaller than the peep's hands and therefore I am much better suited to the task.  So far, the peep has not yet acquiesced on this point but give it time.  One day, I shall get my way.  I just know it.

The next step is to water in the seeds with some more water.  I don't know why it's called watering in.  Think the peep just says that to show off or somethin'.

Then she uses the marker to write the names of the primroses on plant tags and sets them down to dry.  This is another stage in which I am, unfairly, not allowed to participate.  She always mutters something about my getting permanent marker all over my paws but I think she's just makin' that up, too. Like I'm really gonna get that marker all over my paws.  MOUSES!

Once, my dad walked over the driveway right after the peep had put some sort of black stuff on it and before the black stuff had managed to dry.  Now that was a mess.  Then the peep had to take a wire brush to get the black stuff off the new brick pathway 'cause my dad had walked along that pathway right after walkin' over the not-yet-dry driveway.  A little bit of marker on my paws has NOTHIN' on driveway stuff paw prints all over a new brick pathway.  Peeps just like to make mountains out of mole hills, I think.  Always makin' somethin' out of nothin', they are.  MOUSES!

Ol' Peepers can't manage plastic wrap usage to save her soul.  That plastic wrap outsmarts her every time.  It sticks where it shouldn't and never sticks where it should.  It gets all balled up and she has to pull it apart but if the pulling apart part proves too difficult, she has to start all over again. Then when she actually goes to tear it, it doesn't always tear.  Sometimes it just sort of pulls, gettin' thinner and thinner, holdin' on the rest of the wrap on the mother wrap roll for dear life.  That's usually about the time when I hear the peep cry, "MOUSES!"   I've even seen her stomp her feet in frustration.  Always a fun show to watch, for sure.  Almost as good as Bird TV.

Well Ol' Peepers has planted up a dozen or more coffee tins with primrose seed and put 'em all out on the veranda.  Don't know what other peeps think when they come to my front door.  You have to admit, seein' rows of coffee tins by someone's front door is a pretty weird thing to see.  Well, I think it's weird.  Maybe peeps out there just find it to be normal.  Who knows, really.  Peeps do weird things all the time so maybe they're used to seein' other peeps doin' weird things, too. 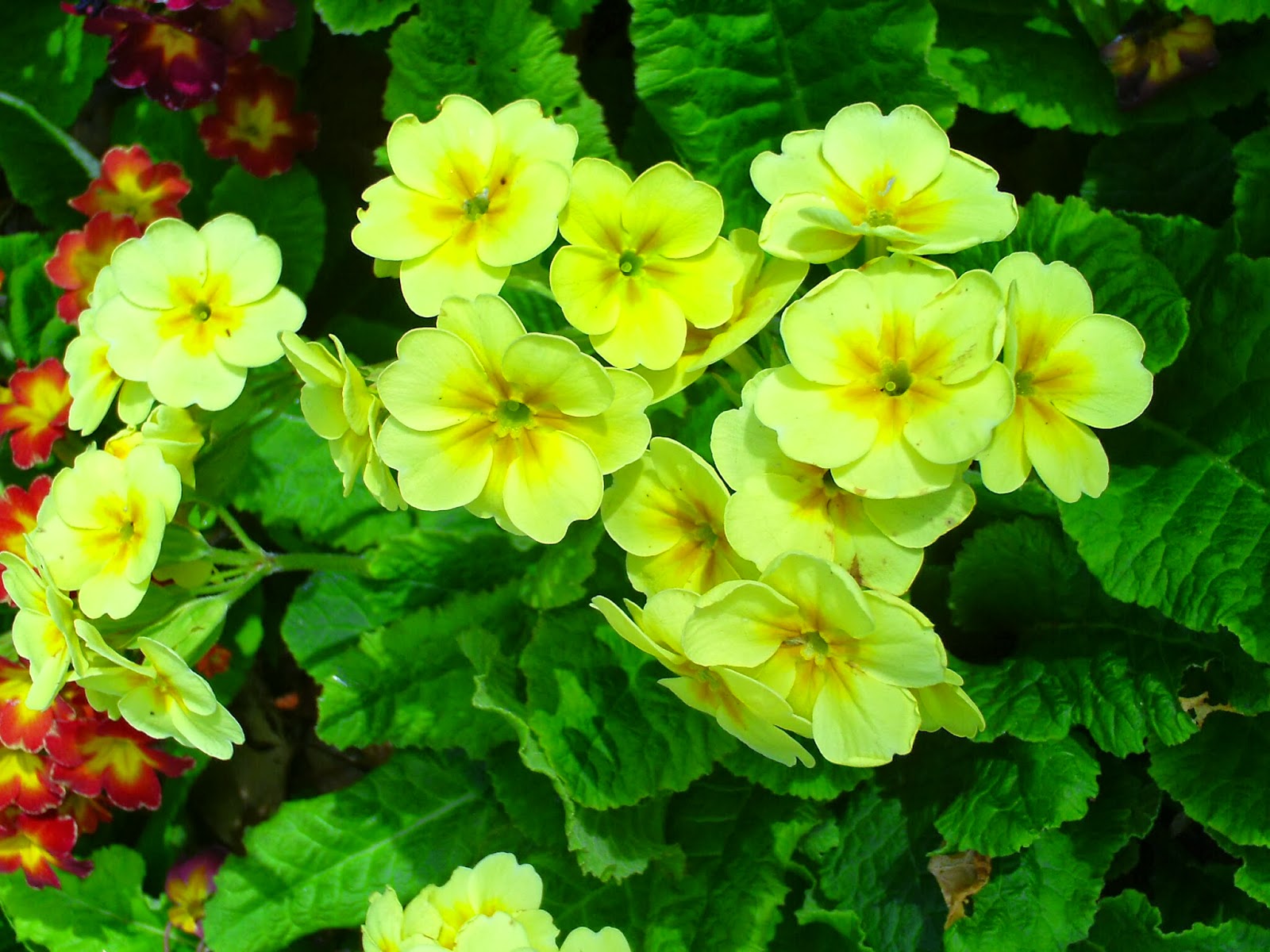 I wanted to show you some pictures of the mess the peep made with her coffee tins and electrical tape but, to be honest, it was a mess and just looked weird.  Then I thought I might grab a couple of whisks and travel forward in time to get some pictures of me with the primroses when they're big enough to bloom.  But then I realised I didn't have to do any time travelin' for pictures 'cause I know the peep already has pictures of me with primroses, blooming in years past.  So I grabbed a few shots from the computer and put 'em up here on my blog.  Hope you like 'em.

I have to admit, the peep does grow some pretty primroses.  I can't wait 'til May when they're blooming again.  I'm gonna pose in them and have Ol' Peepers take my picture, I think.  Should be nice.  Pictures of me posin' in the primroses are always nice.  Don't you agree?