next time, I'll go myself

It wasn't that long ago when the weather was too cold for rain.  Not that long ago, it was freezin'...  literally.  Plus, there was snow.  Not much of the snow about now.  The rain seems to have washed it all away.

It's kind of weird 'cause you'd think that after the rain did all that washin', everything would be all nice and clean but truth be told, it's a mess out there.  Yup, a right ol' mess.  There's muddy stuff here and grungy stuff there.  Even the snow is dirty!  Well, what's left of it, that is.  Has bits of gravel and sand and whatnot stuck in it.  Icky.

Anywho...  even though it was wet and pretty nasty outside yesterday, Ol' Peepers had to venture out into the elements.  One of the stops she made was the grocery store.  I knew she was goin' there.  I told her she needed to go.  Our supply of food was runnin' low.  We needed some tins of our favourites, not to mention some snacks.  Well..  actually...  we didn't need snacks.  Santa brought tonnes of treats at Christmas and we still have lots of them left but we absolutely, really and truly, needed some food.  Food was needed, for sure.

When Peep #1 came home, she was a little on the grumpy side.  I think she stepped in a puddle or somethin'.  Her boots kind of looked like they had been through a puddle or two.  Or three...

Ol' Peepers walked into the kitchen and dropped a couple of bags onto the floor.  Then she headed back outside to get some more.  After three or four trips, she took off her coat and boots and clearly had no intention of goin' back outside.

I sniffed around the bags and peered into a few.  "Hey Peepers!" I cried.  "Where's the rest?"  I had to ask 'cause...  you see...  there were only two bags containing my favourite kind of cat food.  And those two bags weren't all that big, either. 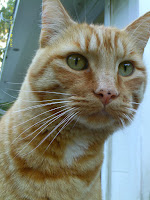 Now you might think that two bags of cat food tins is a lot but when there are ten cats livin' in one house, it really isn't.  We go through several tins a day!  Two bags doesn't last long at all.  In fact, havin' only two bags of tins brought in is quite a disconcerting thought.  We could starve or somethin'!  And it's not like we can eat the peeps' food to tide us over or anythin'.  Those peeps of mine are a couple of veggies.  What they eat isn't fit for a cat, at all.

The peep had a bunch of excuses for her slackness but basically what happened is this...

We have just two proper grocery stores around here.  I've never been to either but I've heard all about 'em.

So the peep went to the grocery store that is closest and was quite happy to see that they had lots of tins of our favourite, Turkey and Giblets.  Quite often, they don't have any of this kind at the store 'cause I guess it's everyone's favourite and the store seems to have a difficult time rememberin' to re-order.  Either that or they don't know how to keep track of what they've sold.

Anywho...  the peep was all happy about there bein' a full shelf of Turkey and Giblets, knowin' that that was what we would be wantin'.  She reached down...   way down...  way down to the bottom shelf and brought out a couple.  She did that again and again once more.  Then she tried to reach some tins one last time but do you know what?  She couldn't reach 'em.  They were way, way back on the very bottom shelf.

Now truth be told, the peep has encountered this dilemma before.  Actually, she has encountered it many, many times.  At this point, Ol' Peepers usually gets down on her hands and knees and crawls around on the grocery store floor until she has everyone's attention with her lunacy and she can get herself into a position where she can reach the tins way at the back of that bottom shelf.  Okay, so I'm exaggeratin' a little.  But just a little.  She does get down on her hands and knees.  She just doesn't go crawlin' around all over the place once down there.

Once, when she was sittin' down on the grocery store floor, another lady was in the pet food isle. This was a lady whom my peep had never met before.  This stranger lady was absolutely shocked that any customer would have to get down on their hands and knees in order to buy somethin' at that store.  Apparently, other customers who don't even know my peep are more concerned about my peep's knees than the peeps runnin' the store.  Could you believe it?  But I digress...

Back to the lack of food.  The peep's explanation wasn't really explainin' why there were only two bags of Turkey and Giblets sittin' on my kitchen floor.  I mean, it's not like this crawlin' around on the grocery store floor experience is anything new.  It happens all the time.  It happens at least once a week.  Usually twice.  The peep knows what to do.  She knows that in order to get a good supply in of the Turkey and Giblets, she has to get down on the floor of the grocery store and reach way back to the back of that bottom shelf.  She has to reach all the way to the back.  Way, way back.  This is simply what must be done.  Why yesterday was any different from any other day had me baffled. 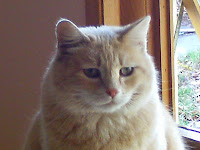 That's when the peep explained how because of all the rain and whatnot, the floors of the grocery store weren't as clean as they needed to be for her to crawl around on 'em. Apparently, even she has limits.  She'll crawl around on grocery store floors when they're clean but not when they're wet from the rain.  The fact that the wetness on the floor in front of the Turkey and Giblets was caused by the peep's very own boots seemed to have eluded her.  Any puddles by the Turkey and Giblets were of her own doin'!  I told her this and she simply ignored me.  Could you believe it?

If a peep won't crawl around on the grocery store floor so that her favourite kitty has his favourite food to eat, what good is that peep?  Why keep the peep in the first place?

Next time, I'm gonna go to that grocery store myself, I think.  I'm already down at the level of that bottom shelf so I won't have to get down on my knees.  Just bein' on my paws will work for me.  And as luck would have it, I'm on my paws all the time.  I mean...  I walk around on my paws on a daily basis 'cause you know...  I'm a cat.

So if you happen to be at a grocery store in the neighbourhood and see a handsome sterling silver - some say platinum - tabby cat walkin' around the pet food isle, haulin' out the tins of Turkey and Giblets for his peep to put into the cart, it's probably me.

Yeah...  next time, I'll go myself.  I think that would be best.  Fewer complaints from the peep that way.  And you know what they say.  They say, if you want somethin' done right, you've gotta do it yourself.  I'm gonna take that sayin' to heart.

Just hope I don't starve or somethin' between now and then. Hope I can hold out 'til the next grocery store trip and don't wither away into nothingness or somethin' like that.  It could happen.  I had better be careful.  Either that or I'll have to develop a fondness for veggies burgers.  Well, that's not gonna happen.  MOUSES!