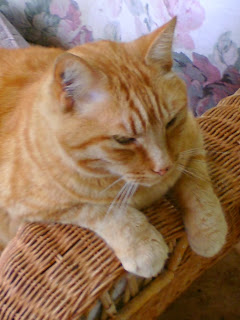 I knew something was up.  I couldn't quite put my paw on it but I knew that somethin' was amiss.  The peep was up to somethin' and peeps bein' up to stuff is never good news for cats unless, of course, that somethin' is somethin' we told 'em to do.  This, unfortunately, was not the case.  I haven't told Ol' Peepers to do anythin' out of the ordinary as of late.

It all began yesterday.  Truth be told, I believe it began long before that but my suspicions were first aroused, yesterday morning.

I softly padded into the kitchen and overheard the two peeps talkin' to one another.  They hadn't heard me enterin' the room so I stood quietly and listened in on their conversation.  Had to make sure no one was talkin' about trips to the doctor or anythin' like that, you see.  One must always be wary of bein' ambushed by peeps, stuffed in a carrier and taken against one's will to the doctor.  No mention of the doctor but the subject of the calendar was brought up.  Now, I know from past experience that peeps tend to write down the times of doctors' appointments on calendars.  This was going to require some investigation on my part.

I gazed up at the wall.  There was the calendar, dangling down, taunting me but remaining just out of my reach.  Not this again, I thought.  Last time I needed to look at that calendar, I had to get a boost up from my brother Rushton.  I glanced around but Rushy was nowhere to be seen.  Probably outside chasin' leaves or somethin'.  MOUSES!

Could I scale the wall, I pondered.  Probably not.  A cat could seriously hurt himself tryin' to scale walls.  Better not attempt that.  Much easier to scale a peep. 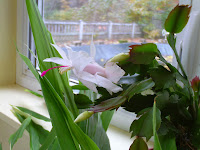 Like a flash, I appeared by Peep #1's feet.  I looked up at her with that look I reserve for just such occasions.  Success!  She reached down and scooped me up in her arms, lavishin' the kisses and cuddles upon me.  I squirmed like a worm.  Ewww...  peep kisses.  MOUSES!

Once settled in her arms, I telepathically controlled my peep to walk me over to the wall holding the calendar.  Like a robot, she acquiesced.  I glanced over her shoulder and peered at the dates.  Nope...  no...  uh-uh...  nothing 'bout doctors on that page.

I was just about ready to will her to turn to the month of November when I realised that she was still jabberin' away to Peep #2.  "We gain an hour next week, not tomorrow," she said.

Gain an hour?  Oh, it's the time change thingy.  Just peeps fiddlin' with clocks and time zones and whatnot.  I squirmed in her arms again, lettin' her know I wanted down.  Nothin' to worry about after all.  WRONG!

Walkin' into the sunroom, a glimpse of white caught my eye.  What's that?  Hmmm...  a Christmas cactus?  No, it can't be.  We haven't even had Hallowe'en yet.  Christmas cacti can't be bloomin' at this time of year. 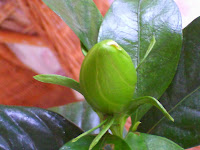 I glanced over at my brother Seville.  He had an awfully smug look on his face as he sat there, hangin' out on the chair next to the peep's gardenia.

MOUSES!  The gardenia was covered in flower buds.  I inspected it more closely.  Eighteen, nineteen, twenty...  I stopped countin' at twenty.  This can't be right.  Buds on the gardenia at this time of year?  Surely not.

Then I looked over at the plumeria that have managed to infest my sunroom, taking over all the best sunpuddles.  Even the big ones are still kind of small so it's pretty easy for me get my nose right in there and check 'em out.  Needed to make sure they were headin' into a state of dormancy like they're supposed to do every fall.  What's this?  And this?  Leaves?  New leaves?  They're pushin' out leaves at this time of year?  MOUSES!

I raced to the window and looked out.  I needed to make sure that it was, in fact, still fall.  It sure did look like fall out there.  Many of the trees were already bare and the lawn was strewn with leaves.  Whew, fall was still here.  I hadn't napped through an entire season or anything like that. 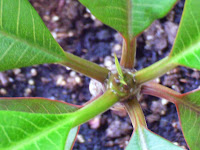 I thought for a moment.  Outside it was fall.  The calendar said it was October.  But inside I had a Christmas cactus blooming like it was December, plumeria throwin' out leaves like it was summer and a gardenia full of buds like it was somethin'...  well I wasn't quite sure what that somethin' was but I was pretty sure it wasn't fall.  What the...

Then I remembered the conversation between the peeps.  The conversation about that hour bein' gained.  An hour...  a unit of time...  time..  WHISKS!

I ran into the kitchen and hopped up onto the island.  Pullin' open a drawer with my paw I peered inside.  Where were the whisks?  WHERE WERE THE WHISKS?  I looked around, frantically.  There was a whisk over on the counter.  What had he done?  WHAT HAD HE DONE?

The peep looked over at me, somewhat amused.

"There's nothin' amusin' about messin' with whisks!" I told the peep.  "Sure, it's all fun and games for a while.  All fun and games until someone gets tangled up in the wrong time-space continuum, that is." 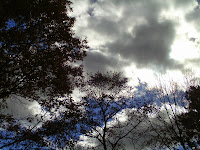 In an obvious attempt to screw around with the time lines within the house, tryin' to get stuff to bloom when stuff shouldn't be bloomin', he and the peep had been messin' with whisks.  Who knew what damage they had caused and whether or not said damage would be permanent.  A shiver ran down my spine and as a cat, I have a really long spine.  The tip of my tail was still tingling as the rain started to fall.  It had begun...
Posted by Seville at Nerissa's Life at 10:47