until we meet again 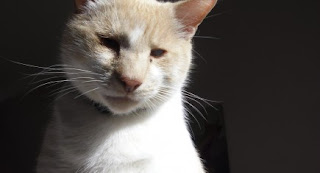 By now, you will have heard the news.  The horrible and tragic news about our good friend Dash.  He's gone.  He was taken from us so suddenly.  I can barely contain my tears as I write this letter to you.  Why?  WHY???  Why our friend and confidant?  Why?  It isn't fair!

I've been trying to make sense of it all but to no avail.  All I can do is cry and whimper.  I have to admit, I'm a bit of a blubbering mess over here.  I'm not even interested in the nip.

Peep #1 held me close and told me that I should try to focus on the good times we all had together.  You, me and Dash.  She said that thinking 'bout all the happy memories would make Dash's passing a little easier.  Not easy, by a long shot but perhaps, a little easier.  So I curled up on my peep's lap, closed my eyes and started to remember.

The first thing I remembered was the ding of the toaster.  DING!  Remember?  Dash was the only cat from New Zealand to ever send me anything via my toaster transporter.  Well, Dash was the only cat from New Zealand with a toaster transporter compatible with mine.  He must have tinkered with the toaster on his end 'cause from what I understand, most North American toaster transporters are not compatible with ones from other areas of the world.  Weird, when you think about it.  I mean...  what's the point of havin' toasters to transport if they won't transport everywhere?  But that was Dash for you...  a cat of vision.  Dash knew the score when it came to toasters and transportin'.

I still have the book he sent me.  I will cherish it, always. 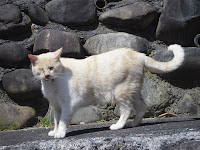 Savvy, that's the book Dash found in The Old Booke Shoppe that had the sprig of Zealandian nip in it.  That's the book that sent us all off on that wild and wonderful adventure, together.  Those were the most exciting days of my life, ever.  Ever!  I loved every minute of them.  Well...  every minute that I can remember.  Some of it's a little hazy.  You know...  'cause of the nip and all.  Gosh that nip was strong stuff.

Dash was always tinkerin' with mechanical things in that workshop of his.  I always knew he had an interest in mechanics and whatnot but never realised just how big that interest was until we all took that trip together.  The trip for the nip.  Hehehe...

You find out a lot about a cat when you time travel with him.  MOUSES!

I think Dash might have wanted to meet up with my brother Seville, at some point, to discuss the use of whisks in the development of time-travelling teleportation physics.  I have to admit, I was tryin' to discourage that meeting.  Seville is dangerous when it comes to whisks!  He seems to have a raw natural talent for the science but he takes way too many risks.  Yes, my brother takes risks with whisks.

Seville will perform experiments without really thinkin' them through, you know?  Maybe...  maybe a partnership between Dash and Sivvers would have been a good thing.  With Dash's rational mind and straight-forward thinkin', he might have been just the steadying force my brother needs.  If only Dash was still with us.  If only...

Did you know that Dash was workin' on a submarine?  It's true.  I'm not sure where he planned to sail it, or anything.  Do you sail submarines?  Is that the right word?  Bet Dash would know.  I wish he was here so that I could ask him. 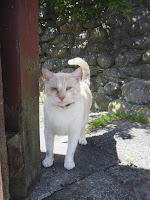 Dash's mum mentioned to my peep that she had been hearin' a lot of hammering in their garage, lately.  All that hammerin' had her a bit worried, I think.  Dash must have been tinkerin' with something in there.  I bet he was tinkerin' with that submarine.  I wonder how far he got.

Savvy, what if Dash was using whisk technology in conjunction with his submarine?  Whoa...  that would be powerful stuff.  No wonder he wanted to talk with Seville.  But now...  I guess...  I guess we'll never know.

Dash was quite upset when he found out that you had your own PawPal account, Savvy.  Hehehe...  I still remember what he said when he found out.  "Here I am, building a sub on a number 8 wire budget and Savvy has PawPal!"  He went trottin' off to tell his mum.  I wonder what she said.  I'm gonna ask the peep to ask her sometime.  Sometime when she's feelin' a bit better.

We had quite the landing when we teleported to New Zealand, huh?  Dash sure was a welcome sight.  He was right there, waitin' for us.  I sure was glad to see him.  Glad to see that jeep of his, too.  I had had just about enough of the teleportin' business right about then.  First I wrecked my egg beater teleportation device - thanks to Seville - and then I somehow managed to mess up your tunnel.  MOUSES!

And remember how well he drove that jeep of his?  Dash was an amazin' driver!  Did he rent that jeep or did he build it?  I wouldn't be surprised if he had built it.  Dash was such a talented cat.  I think Dash could probably build anything he set his mind to building. 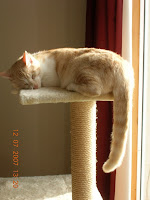 I was just thinking 'bout how protective Dash was of me when I was...  you know...  affected by all that nip in Zealandia.  I would never have made it out alive if it were not for you and Dash.  You and he grabbed me and practically dragged me out of that field with the nip.  Practically dragged me to safety.

Dash was such a good friend to us both.  He was the perfect cat to accompany us on our adventure.  Couldn't have asked for anyone better.  Not anyone at all.

Oh Savvy...  Peep #1 says that we'll all be able to meet up with Dash again.  She says that in the distant future, when it's our time to travel to the Rainbow Bridge, we'll see him once more.  We'll see our dear friend and confidant.  We'll be able to share stories and nip and treats and whatnot.  But the peep says it's not our time yet so we must wait.  Wait until...  until we meet again.

Love and purrs,
Nissy
Posted by Seville at Nerissa's Life at 10:29