parting is such sweet sorrow 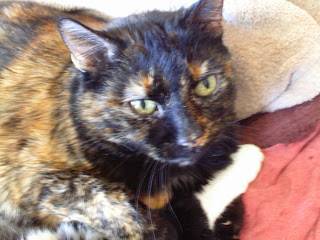 Snowdrop had been showing her age, I am told.  I hadn't really noticed myself but the peeps said she was.  They were worried 'bout her 'cause her appetite wasn't quite as good as usual and she didn't play as much as she had.  She didn't race around, chasing the rest of us cats anymore or climb up the back of the couch or jump up on the counters.  But at sixteen, how much playin' does a peep expect from a cat?  I mean, seriously...

Also, Auntie Snowdrop had a growth on her side.  Our doctor had seen it but didn't know for sure what the cause was.  It didn't seem to bother Snowdrop at all.  Apparently, at her last check-up, the doctor took a really good look at the growth and felt all around it.  It wasn't hurtin' her or anything.  Not even with all the pokin' and proddin' that doctors do.  My aunties' mama, Alicia, died from cancer eleven years ago this month and the peeps thought that Snowdrop might have it, too.  Together, our doctor and the peeps decided that as long as the growth didn't hurt Snowdrop, they should leave it alone.  After all, she was sixteen years old and even if it did turn out to be cancer, they weren't gonna put her through any really invasive procedures.

Then on Sunday, Snowdrop stopped eatin'.  The peeps tried to entice her with all sorts of goodies but she just wasn't interested.  Didn't even want to have anything to do with the Fancy Feast.  That was pretty unusual for my auntie.  That would have been unusual for any of us.  We all love the stuff.  But when peep #1 put down a plate with one of Snowdrop's favourites, Snowdrop got up and walked away.  My Auntie Blossom helped her out by polishing it off. 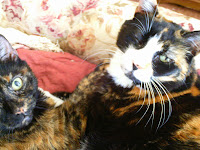 At some point on Sunday, Snow - that's what we used to call her for short - crawled under the big chair in the family room.  The peeps hoped she would sleep for a bit and then feel better afterwards.  Eventually, she came out from under the chair but she wasn't feelin' better.  She was feelin' much, much worse.  She was havin' trouble walkin' and still wouldn't eat.

She was thirsty though so peep #1 gave her water.  Snowdrop wanted to drink out of a bowl but the peep was scared that she was holdin' her head so low in the water that she might accidentally drown.  So ol' peepers brought my auntie into the family room and gave her water with a syringe.  She lapped it right up.  The peep released the water very, very slowly and Snowdrop lapped each drop of water as it fell from the syringe.

By late evening, Snowdrop began to cry every now and then.  The only things that would comfort her were drinks of water and havin' my peep sit next to her and tickle the top of her head or massage her ears so my peep did that.  She stayed by Snowdrop and gave her a large syringe of water every hour or two.

Snowdrop's sisters, Blossom and Primrose, stayed in the family room all night.  Not cuddled up with Snowdrop like they often did but near.  They seemed to sense that something was seriously wrong.

The peep slept on the couch in the family room, Sunday night, so as to be near Snowdrop.  She didn't get much sleep though.  Actually, I don't think she got any at all.  She kept getting up to check on Snowdrop and give her more water if she wanted it.  She spent a lot of time just sitting on the floor next to the big chair, bein' near my auntie. 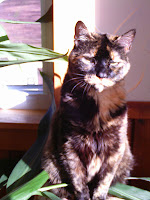 My peeps knew that Snowdrop's time was near.  Peep #1 was praying that my auntie would quietly and peacefully slip away in her sleep just as Snowdrop's mama, Alicia had, eleven years before.  The peep told Snowdrop she had nothin' to fear.  That she should feel free to go to her mama up in Heaven, if she was ready.

When morning came, Snowdrop wasn't any better.  She was still cryin' every now and then and couldn't walk on her own.  The peeps made the call they didn't want to make but knew had to be made.  On the morning of Monday September 16th, my Auntie Snowdrop peacefully drifted off to sleep for the final time.

Peep #1 says that my Auntie Snowdrop is in Heaven now.  She says that Snow is with her own mama, Alicia and her aunties, Kelsey and Sadie as well as her uncles, Boswell and Sebastian.  My brothers Desdemona and Callista are there, too, along with my nephew Aristotle and my own mama, Madison.  And my younger brother and sister, whom I barely knew - Alexander and Josephine.  They're there, as well. 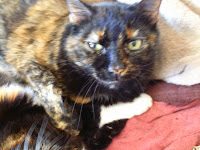 Although right now I am so very sad and miss Snow so very much, the peep says that one day, I will meet up with my auntie again.  For now, we must part because it was Snowdrop's time to leave this earth but one day, in the distant future, we will reunite once more.  She says I must hold on to that thought.  That that thought is what will get me through this difficult time.  The knowledge that in the future, we will once more be together as a family again.  She says that this is why parting can be sweet sorrow.  Parting now is horribly sad but our family reunion in the future will be the sweetest of occasions, indeed.