of pots and kettles

A funny thing happened the other day....

First of all, I must provide you with some background information.  I need to paint the scene, so to speak.  But I'm gonna paint with words instead of paint 'cause...  well...  firstly, I don't have any paint and secondly, even if I did, I just washed my paws.

We have these neighbours and they make a lot of noise and that, my friends, is the understatement of the century.  They really make a lot of noise.  For the first half of the summer, they were making noise with table saws and chain saws and who knows what other kind of saws.  They were doin' something with wood and saws although I have no idea what.  It kind of looked like they were cutting up firewood or something but as far as I know, they don't have a fireplace or even a wood stove.  Their house doesn't have a chimney for a wood-burning stove but maybe they have something else.

But our problem was not with the wood.  It was with the noise.  The noise was unbearable.  My peeps wouldn't even go out in the backyard when it was going on and it was going on a lot.  Every single day for several weeks.  The peeps couldn't go out on the deck, peep #1 stopped workin' in the garden 'cause the noise was hurtin' her ears and neither peep could hear the television in the family room if the windows were open.  And since it was summer and hot, they wanted to open the windows. 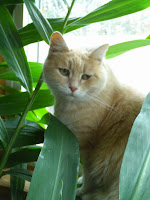 And let me tell you, they have quite the vocabulary.  There was this one particular word that they used a lot.  I won't publish it here 'cause it's not fit for mixed company...  and by mixed company I mean cats as well as peeps.  Anywho...  one day I heard one of them using this particular word as a noun, verb, adjective and adverb all in the same sentence and to be perfectly honest, it sounded like it came quite naturally.  No effort at all.  Apparently, they know how to use this naughty word, very well.

My peeps were furious about the noise but they were pretty upset with the language, too.

Then one day, ol' peepers decided enough was enough.  She spotted a woman whom she believed to be the mother of one of the men livin' in the house and she realised the opportunity she had at paw.  Ol' peepers flung open a family room window and had a somewhat one-sided conversation with herself.  She faced the open window and used her I'm on stage and will project voice.  When the peep uses that voice, it carries very well, too.

"We're not going to put up with this anymore," she said.  "If it doesn't stop, I'm calling the police and then I'll be calling the county to lodge a complaint.  We have the right to enjoy our own property..."  She went on and on and on.  She mentioned the constant and unbearable loud noise from the wood stuff that was hurtin' her ears and she talked about the use of the word to which I alluded, earlier.  Once she had said what needed to be said, she closed the window.

Well, the next week, the saws started up again on Monday evening but for only half an hour and they were never heard from, again.

Does my peep have the magic touch or what?

The other day, ol' peepers was checkin' on her plumeria babies on the deck.  I was right there, beside her, making sure she did it right.  Off in the distance, we could hear someone playing the bagpipes.  We don't know who plays the bagpipes but someone in our subdivision does 'cause we hear it quite often.  It's never that loud though.  Peep #1 doesn't even like the bagpipes and the sound doesn't bother her at all.  It's just not that loud.

Anywho...  one of the neighbours pulled into his driveway and I guess he heard the bagpipes, too, 'cause then we heard him yell,  "Shut up!  Blankety-blank!  No one wants to listen to the blankety-blank bagpipes!"

Posted by Seville at Nerissa's Life at 10:52