the sweet smell of lavender

A few weeks ago, I was contacted by a lovely lady over at the World's Best Cat Litter company and asked if I would do a product review for 'em.  I said, "Sure!  I'd love to do that but...  did you know that I was a Canadian kitty?"  Well, sure enough, that put a bit of a monkey wrench in the works but I reached way in there with my paw, grabbed that ol' monkey wrench and tossed it away.  Quick thinkin' on my part, huh?

Ummm...  what's that peepers?  Oh yeah...  sorry 'bout that.  It was actually the lady from the World's Best Cat Litter company who de-monkeyfied the wrench.  Or did she de-wrenchify the monkey?  Point is, she was the one who figured out how to solve the problem at paw.

You see...  although the World's Best Cat Litter is available in Canada, the new and improved secret formula was only bein' introduced in the US, at least to start.  What's that peepers?  It's not a new and improved secret formula?  Bet it is.  Bet it is a secret.  Bet it's some kind of  trade secret or somethin' and even if it's not, secret formula sound so exciting.  My readers like a little excitement, you see.  I suppose however, I should tell everyone the new formula's real name.  It's called Advanced Natural High Performance Clumping.  Sounds pretty good, I think, even if it isn't a big ol' secret.

Anywho...  the lady at the World's Best Cat Litter company suggested that I do a product review of the original series that is available in Canada and I agreed. 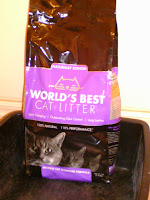 You can imagine my excitement, a few days later, when the UPS man arrived with a parcel just for me.  I knew that inside that box would be a package of the World's Best Cat Litter which would allow me to begin my experimentation.  I also happened to notice that the box containing the litter was the perfect size for a cat like me to enjoy a nap or two.  Thank you very much for that box, by the way.

My experiment took place in the little bathroom by the front door.  The old litter box and litter were thrown away and replaced with a brand new box filled with lavender scented World's Best Cat Litter.  The first thing I noticed was that it didn't really smell like lavender.  Now don't get me wrong...  it did smell nice.  It just didn't smell like lavender.  At least not like the fresh lavender the peep grows in my garden.  But I think that's just the difference between fresh stuff growin' in the garden and the lavender oil they use to scent the stuff 'cause it is scented with real lavender oil.  It's not scented with any chemicals or unnatural perfumes or anything like that.  They use the real stuff. 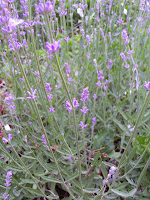 Peep #1 says that even though it doesn't smell like the lavender in my garden, it does smell way better than the alternative and I agree.  We all know what that alternative is, right?  Right.

As a matter of fact, since we've been using the World's Best Cat Litter in that particular box, there hasn't been a trace of any sort of unpleasant smell in the small bathroom.  Not a trace.  Odour control is obviously workin' at one hundred and ten percent!  I have concluded that this product is excellent at controllin' the odour.

And I've noticed that the peeps have been in a better mood since we cats have been using this product, too.  I think that has to do with the fact that keepin' this litter box clean is so much easier now.  Before, that big ol' box had to be lugged up and down the stairs leadin' to the basement.  Always had to be completely cleaned out once a day, sometimes twice!  That was a lot of work for the peeps, I suppose.  Plus, on garbage day, there were all those bags of used litter to be hauled down to the end of the driveway.

You see, prior to the start of my little experiment, we had never used a clumping litter before.  Never.  Not ever!

The main reason my peeps wouldn't use a clumping litter was because they feared that it might get into our tummies and cause problems.  Several years ago, my brother Desdemona died from complications due to chronic constipation and that had nothin' to do with litter.  The peeps simply weren't willin' to take the chance of using a clumping one.  They worried about it clumpin' in our intestines.  They were extremely concerned about this bein' an issue.

But it turns out that the World's Best Cat Litter is different from all those other clumpin' litters.  This litter is actually "safe if ingested."  Now, I'm not suggestin' you go and make a meal out of it or anything like that but if you should accidentally lick it off your paws or somethin', you're gonna be okay.  Well, that was the sellin' point for my peep #1.  She was willin' to let my fur-family and me try the World's Best Cat Litter out if she knew that doin' so would be safe for us.

Unlike other litters, the World's Best Cat Litter is made from "100% natural whole kernel corn."  It doesn't contain any clay at all.  Clay is not something you should be eating, if you know what I mean.  It also "doesn't contain harmful silica dust" like clay litters.  No one should be breathin' in silica dust.  Nope.  Neither cats nor peeps wanna be breathin' that in.  I should also add that it's environmentally friendly 'cause the corn comes from renewable sources, unlike clay, which is strip-mined.

Cleanin' up our upstairs litter box has been a snap for the peep since we've been usin' the World's Best Cat Litter.  We use it, she scoops it and all is well.  And the peep must agree about this 'cause she went out and bought another bag of the stuff.  It's only a matter of time before the basement litter boxes are converted as well, I should think.  Only a matter of time. 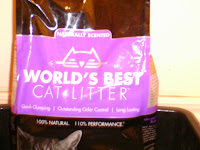 Now, I have some good news for my American readers.  One of you is gonna get to try out the new Advanced Natural High Performance Clumping litter.  That's right...  I'm gonna do a giveaway!  Well...  actually, the World's Best Cat Litter company is doin' the giveaway but I'm helping 'em out.  Just leave a comment on my blog with your name and statin' that you live in the US - 'cause you know, the new Advanced Natural High Performance Clumping product line is only available in the US so far.  Then a week from now, I'm gonna have a draw.  One of the cats who has left a comment on this blog post will win a bag of the stuff for themselves.  Eventually, I will need the winner's shipping address and telephone number but in the meantime, just please make sure that I have a way to contact you, if you win.

So there you have it.  My little litter experiment has come to an end even though, it does continue daily with our daily use of the litter.  I would like to add that all opinions expressed in this product review are my own.  No one told me what to say or influenced me in any other manner.  I received no payment for doin' this review.  All I got was a bag of litter to try.  Oh yeah...  and the cardboard box in which it was shipped.