If it looks like a duck and quacks like a duck, it probably is a duck.  Right?  Hmmm....  not accordin' to the weatherman.

So there I was, draped across the couch in the family room yesterday morning, glarin' at peep #1 and tellin' her to KEEP HER DISTANCE 'cause, quite frankly, it was way too hot for cuddling.  Cuddling?  To tell you the truth, it was way too hot to have a peep anywhere within the proximity of a mouse's tail length of you.  Even a cat's tail length would've been too close.  Yeah, it was that hot.  We're in the
midst of a heat wave.

But, the peep bein' a peep, sat down next to me, anyway.  MOUSES!  Then she turned on the television to get the weather and that's when I heard it.

And just what did I hear?  I heard that weatherman on the weather channel talkin' about heat waves.  He was talking 'bout what is a heat wave and what isn't a heat wave.  I kind of think he needs to go back to weatherman school 'cause I'm pretty sure he has it all wrong.

Let me tell you, it was thirty something degrees out there yesterday afternoon and with the humidex, it felt like forty!  And that was in the shade.  If forty degrees in the shade isn't hot, what is?

It has been hot all week.  Maybe the actual temperatures weren't always in the thirties but with the humidex, they were.  Those days all felt like they were over thirty degrees.  So if it feels like a heat wave, surely it is one.  It's not like I can think the heat away.  I tried and it just doesn't work.

Even the nights haven't been cool.  Friday was the coolest day all week.  Big deal.  At midnight, there I was, still outside, tryin' to get some cool night air and not finding any.  Believe me, I looked everywhere.  At midnight it was twenty-three degrees and muggy as muggy can be.  I only came inside 'cause the peep came out to get me in her nightie and the sight was just too embarrassing.  What if nosey neighbour cat should see?  I figured that if she stayed outside any longer, she might get herself arrested or something.  Peeps really aren't supposed to waltz around in public in their nighties you know although, from what I've been told, a lot of them do.  Still no reason for my peep to be doin' that.  Prancin' about and showin' off her nighties, for all the world to see.  MOUSES!  That might constitute a peep show or something and I know you can get arrested for that.  No, I decided it would be best if she and I just went inside the house where she would be out of the prying public's eye.  When you're a celebrity like me, you have to be careful of what embarrassing things your peeps might get up to, if you know what I mean.  I'm sure that you do.

I sent the peep out for pictures, yesterday.  I gave her a list of the shots that I required.  I needed some pictures of the plumeria on the deck but I wasn't going out there to get them.  No way was I going out there.  That's the hottest part of the whole garden and if the coolest parts of the garden were hot, the hottest parts would be sweltering.  The pictures proved my point.  Just as I suspected, the little plumeria dudes where happy as clams.  They like tropical climates and, apparently, they like our deck.  They think we're havin' a heat wave and they're lovin' it.

Then I sent her out to take pictures of the calla lilies.  They were slow in coming up this year 'cause the spring was late and cool.  Well, ol' peepers said there are at least four flowers startin' where there were none a couple of weeks ago.  Calla lilies like hot weather.  They, too, think we're having a heat wave.  More proof of my theory. 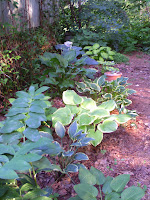 Then I, personally, went with the peep to investigate the little shade garden on the other side of the deck.  The shade garden that stays cool and comfortable all day long.  Just as I suspected, I found a bunch of hostas over there drinkin' margaritas and pina coladas 'cause, like I heard them complainin' in their drunken stupor, we're having' a heat wave!

So there you have it, folks.  If it looks like a heat wave and feels like a heat wave, it SURELY MUST BE A HEAT WAVE.  I've spoken to the ducks on this matter and they all agree with me.  Now we just need to get that ol' weatherman on board.  He's gonna have to agree with me 'cause, quite frankly, I'm pretty sure that I'm right.  MOUSES!

Posted by Seville at Nerissa's Life at 11:18