One day, all my e-mails stopped.  Stopped!  Not a single e-mail was coming through.  Now, some might suggest that I just wasn't gettin' any mail...  that no one liked me anymore...  but I knew that that was not true.  You see, I have comment moderation on this here blog of mine so every time a friend leaves a comment on my blog, I get an e-mail.  Pals were leavin' comments all over the place but I wasn't getting any e-mails.  So you see, I knew for a fact that something was apaw.  Duh duh duh duhhhhh.....

I called out, "Peepers!  Prepare my teleportation device!"

"Fine but you do it.  I've got stuff to work on," I mumbled as I went back to pouring over my blueprints for the time machine I'm building.  Don't tell anyone 'bout that last part, okay?  It's top secret.

So the peep got on the phone.  A very nice lady from the phone company tried to help ol' peepers with my e-mail prob.  Three hours later, the problem had been solved.

It turned out, there was a back load of e-mails on my server.  You see, I had been deleting e-mails after reading them but apparently, when I was deleting them, I wasn't really deleting them at all.  And all those e-mails were causing a big ol' traffic jam.  All forty-four thousand of them!  That's a lot of e-mails.

Apparently, there was some stupid little check-mark in some stupid little box that told the server to save all the e-mails even after they had been deleted.  The peep swears up and down that she did not check that box and to be honest, I kind of have to believe her.  As we all know, my peep #1 is a technologically impaired duffer.  She wouldn't know where to find that box to check if her life depended upon it.  I'm thinking the box was checked by gremlins.  Either that or leprechauns.  Neither one is a trustworthy species.

So, after the three hour phone call, all those messages still had to be erased.  The peep did that part on her own.  Two hundred at a time, she deleted all forty-four thousand.  What a job that was.  It took her another an hour.

After all that work, the peep thought she'd check my e-mail for me.  The little box appeared tellin' the peep we were receiving mail.  E-mails started pouring in.  One...  two...  three...  four...  FIVE THOUSAND E-MAILS!  Yes, you read that correctly...  FIVE THOUSAND OF THEM!

Some of them were a month old.  They must have been stuck in the server traffic jam.  A whole whack of them were duplicates.  Three, four and five identical e-mails.  The peep thought maybe that had something to do with all the times our password had been changed during the three hour phone call but really, she was just guessing.  All we knew for a fact was that the flood wouldn't stop.  My peep was drowning in e-mails.  MOUSES!

Once they finally stopped, she cleared out the second lot and sat back to admire her handiwork.  My e-mail was workin' like a charm.  All was right with the world.

The following week proved quite eventful.  I had my knee surgery, spendin' two nights and three days in hospital.  I masterminded "the great fancy feast grilled chicken pizza caper" and broke out of "the cone of shame" not once, not twice but three times.  Yes, it was quite a week but my e-mail was running smoothly.  Then, out of nowhere, everything came to a screeching halt!

One day, I went to check on my mail.  The little box popped up saying that I was receiving some and boy was I receiving mail.  It started pouring in.  It was another flood!  Seven hundred e-mails.  Every message from the past week had been duplicated several times but they all had to deleted, one by one.  During the process of deleting them, I made the mistake of readin' a couple.  I took too long...  the box reappeared...  the box tellin' me I was gettin' mail.  Another seven hundred e-mails!  MOUSES!

This has been going on for a month.  I keep tellin' the peep I need my teleportation device to head on over to the phone company.  She keeps assuring me that she'll call them.  She hasn't yet made the call.

Ol' peepers says she simply doesn't have time for another three hour phone call but will, soon.  Perhaps after my period of recuperation is over.  I don't know how much longer I can take this.  If she doesn't soon fix it, I'm gonna have to take matters into my own paws and make that call myself. 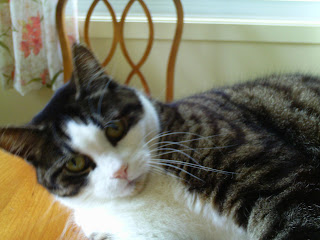 And it's having disastrous consequences upon my social life.  I'm missin' some of my favourite blogs.  Blogs I normally follow by e-mail instead of on my Blogger reading list.  I can't take the time to access them from my e-mail because I know that if I do, I might return to my e-mail to find thousands upon thousands upon thousands of messages.  It's a nightmare, I tell you.  A bloody nightmare.  Stephen King should write about this.  On second thought, this would be too frightening for even him.  This is a problem no man or cat should ever have to face.

I've said it before and I'll say it again.  FRIGGITY-FRACK DER QUACK-DER-KNACK!   ...'cause MOUSES! just isn't enough.
Posted by Seville at Nerissa's Life at 11:40