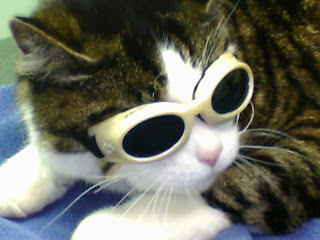 Actually, they're not really shades.  They're goggles.  Now that I've got a pair of goggles...  I need a motorcycle!

But all joking aside, these goggles are special goggles.  They're special hospital equipment goggles.  I wore them when I had my laser treatments on my leg.  Bet you thought they were photo shopped or something, huh?  Nope, they're the real deal.  I was really wearing 'em.

After havin' my knee surgery, my doctor recommended that I undergo laser treatments.  The laser was supposed to make my knee heal faster and I think it kind of worked 'cause I'm feelin' pretty good.  I wanna jump and run and play but ol' peepers won't let me do anything too strenuous.  She has no idea how bored I am.  I keep tellin' her but my complaints seem to go in one ear and right out the other.  I don't think there's anything between those two ears of hers.  Otherwise, why wouldn't she be listenin' to me?  And not just listening.  She should be doing something about it!

I do, however, have some concerns about these laser treatments. 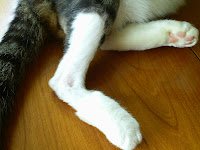 When I first heard the word laser, I immediately thought about starships on television battling it out in some futuristic war.  I was a little worried.  The peep reassured me that the laser my doctor was gonna use was not a weapon but rather, a medical instrument made for healing.  Whew!  That was a close one.

Have you seen my leg?  I've got a moused-up poodle cut.  It's true.  Just look at the pictures! 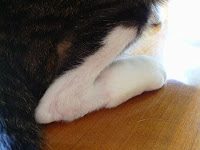 This is a really big deal.  I can't go through the rest of my life with a poodle cut.  Sure, poodle cuts look fine on poodles.  They might even look great on poodles.  But I'm not a poodle.  I'm a cat!  I'm Nerissa the Cat and the poodle look is just not for me.

Then, the other day, I caught a glimpse of my back in the mirror.  What did I find?  I found more missing fur.  I have two patches of missing fur on my back.  I immediately went to the peep and demanded an explanation. 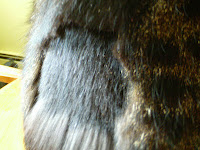 The peep says that the nurses shaved off two patches of fur on my back for my surgery.  One was for the anaesthetic while I was havin' the surgery and the other was for my pain patch that I wore after the surgery.  I do vaguely remember the pain patch business.  I vaguely remember managing to escape the cone of shame for the third time and yanking off some funny bandage thingy that was annoying me to no end.  It was in my way and pulling at my fur.  The peep says that my pain patch was under that bandage.  But after I yanked it all off, the peep threw out the pain patch so she has no physical proof that there ever was one.  And even though I vaguely remember it, I was pretty doped up on the pain meds so I'm not sure that I can trust my memory.  It could have all been a dream.

The only real evidence I have is the fact that I underwent six laser treatments and I have fur missin' on three parts of my body.  I'm connecting a lot of dots here and I'm not likin' the picture those connected dots are forming. 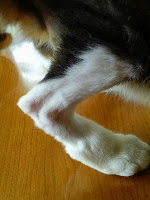 The peep must fancy herself to be a comedian or something 'cause when I was confronting her with my evidence, she said, "They also use laser treatments to remove wrinkles."  Wrinkles?  WRINKLES!!!  I don't have any wrinkles and even if I did, my fur would cover 'em up.  That is if I had any fur left to cover 'em!  MOUSES!

And something else happened when I was unconscious during my surgery.  They gave me a mani-pedi.  That's right...  a mani-pedi.

I never signed up to have my nails done but when I awoke, my claws had absolutely no sharp points.  Not a one.  The indignity of it all!  My peeps never clip my claws.  Never!  I can care for my claws, myself, than you very much.  But there can be no denying the fact that my claws were clipped.  They're dull as dull can be.  Well...  actually...  they were dull.  I've been sharpening 'em up.  It's a lot of work but it has to be done.  Claws are meant to be sharp and that's all there is to it. 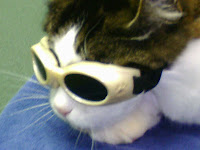 I suppose I should just be thankful that they didn't paint 'em or something.  All I need is four pawfuls of hot pink claws.  I know I look cool wearin' the goggles and everything but a pink mani-pedi just isn't gonna enhance that look.

It's such a dilemma.  I actually quite suit the colour pink.  It goes so well with my nose.  Pink also looks good with my fur.  Sterling silver and pink are a winning combination, you know.

But I'm a mancat and even though mancats can wear pink I'm not sure that mancats with girls' names should wear it.  It's too confusing for the peeps, you see.  Peeps are so very easily confused.  How else does one explain that I'm a mancat with a girls' name and a poodle cut?  And all that needs some explaining, for sure.
Posted by Seville at Nerissa's Life at 11:49