a cat in the stacks exposed...

Hey all!  Welcome to my very first book review.

Actually, this is the first book I've ever read.  Oh sure...  I've read lots of blogs - of course - but never a whole entire book.  But I have this pal named Dean...  Dean James, and he's an author.  He writes all sorts of stuff.  He is what you call a prolific writer.  Some of his books feature this really interesting dude named Diesel and you guessed it...  Diesel is a cat.  When peep #1 told me 'bout the cat in this series of books, I just knew I had to read it for myself.  I mean...  I'm a cat, just like Diesel.  And Dean is my pal!  Choosing this book as my very first ever book to read was one of the best ideas I've ever had.

Now, Murder Past Due is the very first book in the "Cat in the Stacks Mystery" series.  My pal, Dean, did write it but he used the pen-name, Miranda James.  I don't really know why peeps call them pen names.  Silly, really.  I'm sure Dean writes his books on a computer.  Pens are for collectin' and rollin' under refrigerators.  I should know...  that's where I keep my pen collection.  Computers are for writin' books.  Just a silly peep saying, I suppose.

In Murder Past Due, Dean introduces us to the crime solvin' duo of Charlie and Diesel Harris.  Charlie is a librarian.  Diesel is the cat.

Now, this Charlie is a pretty smart fellow.  He seems to know a lot about a lot of different stuff.  He even knows some stuff about solvin' crimes from having read a lot of books with crimes in them.  He also knows a lot about the people livin' in Athena, Mississippi where the story takes place.  And what he doesn't know, he is able to find out.  As a librarian, he's good at researchin' stuff.  Plus, Charlie has a knack for gettin' other peeps to tell him what he needs to know.  I think it's 'cause he has a really kind soul.  He wants the best for other peeps...  especially those about whom he cares.  Peeps confide in him 'cause they trust him.  They know he'll always do right by them.

Charlie has the nicest ever housekeeper.  Her name is Azalea which is a very pretty name, just the flowers on those shrubs.  I wouldn't exactly describe Azalea's personality as pretty though.  That woman tells it like it is.  She is not afraid to speak her mind...  not even to Charlie.  At times I think he might be just a teeny-tiny bit afraid of Azalea.  She sort of rules the roost.  But everything Azalea says and does is tempered by her good heart.  She's a very motherly character and that's a good thing, I think. 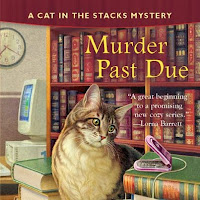 Azalea trusts Charlie to no end.  I mentioned how Charlie was trustworthy, right?  Azalea's daughter is a police officer and in Murder Past Due, she is supposed to find out who the murderer is.  She's in charge of the investigation.  But although Kanesha is smart and well-trained, she doesn't have a lot of experience solvin' murders.  She's under a lot of pressure to find the killer and it's puttin' her in a mood.  Let's just say, she's a little grumpy.  Azalea tells Charlie that her daughter is as "sore as a long-tailed cat in a roomful of rocking chairs."  Speakin' as a long-tailed cat myself, that would be very sore.  Yes, very sore, indeed.

Charlie is caught between a rock and a hard place.  Hmmm... another silly peep expression.  I mean...  aren't rocks hard?  Why don't they just say...  caught between two rocks?  Oohhh...  but what if the rocks were gypsom or something?  Gypsum isn't hard.  But is gypsom a rock?  But I digress.  Azalea wants Charlie to do a little diggin' to help out Kanesha and Kanesha wants Charlie to keep his tail out of her police business.  Poor Charlie has to decide if he's more scared of the mother or the daughter.  To be truthful, I'm not sure he knows the answer to that one.  Probably easier to just figure out who the killer is.

And then there's Diesel.  Diesel is super smart, just like Charlie.  That cat always knows when his peep needs a little extra loving.  He'll jump right up onto Charlie's lap or curl up on the bed and snuggle next to him.  When Charlie's mind is racing with thoughts of the murderous goings-on in town, Diesel calms him with his presence and his purrs.  Cats are good at calmin' their peeps, you know.  It's a skill we have.  And a calm peep is a better investigator than one who isn't.  Isn't calm, that is.

Diesel is well-known around town.  He could never do undercover work.  No sirree!  Everyone - and I do mean everyone - in Athena knows this cat.  He's huge!  Even for a Maine Coon, he's huge.  Peeps have mistaken him for a bobcat or even a dog.  No one can believe a cat can get that big, I guess.  And according to Charlie, Diesel hasn't stopped growing.  He's gonna get even bigger.  MOUSES!  And the cat's purr matches his size.  If you're wonderin' how Diesel got his name, just think of the sound a diesel engine makes.  You're gettin' the picture now, aren't you?

Diesel plays an incredibly important roll in the solvin' of the Athenian crimes.  In fact, without his help, Charlie wouldn't be able to do what Charlie does.  Diesel goes everywhere with Charlie.  Yup, it's true.  He walks on a lead, and everything.  And everywhere Diesel goes, Diesel attracts attention.  Between the size of his purr and the size of...  well..  of his body, everyone has to know just a little bit more 'bout that cat.

Do you remember that great television crime solver named Columbo?  Remember how he used to appear to be a little foolish and whatnot?  Criminals would get distracted by Columbo's mannerisms and not give him the credit he deserved.  They would reveal stuff they shouldn't be revealing and then the next thing they knew, Columbo was figuring out exactly what they had done and how they had done it. 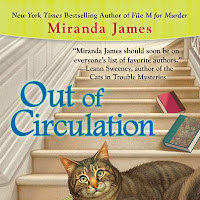 Well, Diesel's purr and size are a little like Columbo's mannerisms.  His very presence can be distractin' to the criminals.  These distractions allow Charlie to get a little insight into their personality and then boom!  bam!  Charlie has figured them out.  Diesel is a genius.  Of course, he's a cat so...  genius is only natural.

I enjoyed this book so much and I'm not just sayin' that 'cause Dean is my pal and all.  I'd say it even if we weren't pals.  Reading this book has inspired me to read more books.  In fact, I'm gonna read the next two in the series.  And Peep #1 tells me that she has ordered the fourth Cat in the Stacks Mystery which is being released in paperback this Tuesday by Berkley Prime Crime.  And do you know what?  I'm gonna read that one, too!  Ooohhhh...  this book readin' stuff is fun!
Posted by Seville at Nerissa's Life at 10:53