I was being extraordinarily generous with the computer and allowed the peep to use it for a bit to do some of her own writing.  I figured that as I was all caught up with my blog posts and I had visited my pals in the blogosphere, I could afford the generousity.

Even though I wasn't working myself, I decided to hang around in the office with the peep.  There are windows in there from which I can view the driveway.  From those windows, I can see that nosey neighbour cat if he's comin' over to score some food.  Not that he needs to eat here or anything.  He has a couple of peeps of his own and they take super-duper good care of him and everything.  He just likes to come over and see what my peeps are serving, I suppose.  Also, I think he likes the drama.

Usually, I use the big bay window for my viewing purposes.  From there I can see right across the road and supervise both my driveway as well the driveway belonging to that nosey neighbour cat.  But to look out that window, I need to be sitting at my desk and I couldn't sit there 'cause I had given the peep permission to use my chair along with my computer.  She had plunked herself down in that chair and there was just no getting her to move.  MOUSES!

Just what was a cat to do?   I decided to look out one of the two smaller, side windows.  They have ledges whereas the bay window doesn't.  No chairs needed.  So I hopped right up onto one of those window ledges and that was when the incident occurred.

Now, you're probably thinkin' the incident involved that ol' nosey neighbour cat.  Under normal circumstances, you would probably be right.  There's always a bit of drama when nosey neighbour cat comes around.  This time, however, he was nowhere to be seen. 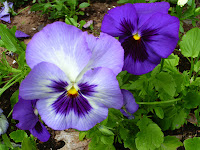 As I hopped up onto the window ledge, I discovered that where there should have been plenty of room for all four of my paws plus my rear end, there wasn't.  Plant pots were occupying the very same space as what my rear end wanted to occupy.  Now I fully understand the laws of physics and the thing is, two objects of mass can't possibly occupy the same space.  At least not at the same time.  It's just not possible.  Leads to all sorts of time and space warping catastrophes and I really wasn't in the mood for one of those, that day.  So, in a matter of nanoseconds, I quickly calculated just what objects of mass would have to be removed from the window ledge to make room for my object of mass.  That would be my rear end.  It wasn't a difficult calculation.  I knew almost immediately that the answer was two.  Two plant pots would have to go.

So there was a bit of a crash and maybe a little smash but in the end, my cute little butt was sitting just where it wanted to be.  You've heard of the Occupy Wall Street movement?  Well this was the Occupy Window Ledge movement of Nova Scotia.  And let me tell you, when all was said and done, the window ledge was occupied by none other than me.  Success!   And just as it should be, my friends.  Just as it should be...

Of course, to the ol' peep, this qualified as an incident.  Oh the fuss she made.  Ridiculous, really.  The cyclamen weren't bothered one bit by falling to the ground.  They've been sleepin' all summer.  The peep says they are dormant.  Well la-dee-da with the fancy terms.  All I know is they were sleepin' before I knocked them to the floor and falling on the ground didn't wake 'em up.  So, obviously, they weren't too bothered by the whole thing.  Unlike the peep. 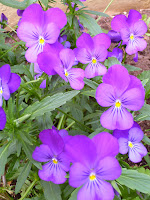 The peep's face was all silly looking 'cause she had her mad on.  I just looked at her and reminded her that it wasn't my fault.  Am I now supposed to defy the laws of physics?  Physics is what made it necessary to knock down those pots.  I also pointed out to her that, like I said, the plants were still sleepin' so I couldn't understand what her problem was.  But the peep still had her mad on so I had to take matters into my own paws.  I said, in a firm but not too unkind voice, "Show's over...  nothing to see here...   move along little doggy...  move along."  That actually didn't go over too well, now that I think about it.  I think it might have been the doggy reference...

You know...  it's the peep's own fault for putting the pots there in the first place.  She should have known I might need to sit up on that ledge if she was gonna occupy my chair.  Peeps never think these things through, you know?  They can be so silly and...  and...  well let's face it...  pretty darned stupid at times.  But truth be told, I am glad I didn't knock down any pots up on the other ledge.  The ol' peep planted me some pansy seeds in those pots so that I'll be able to have some pansies in the winter.  I like pansies.  They're my favourite flowers, I think.  Plantin' those seeds was pretty nice of the ol' peep so maybe...  just maybe...  I'll forgive her for all the fuss she made 'bout the incident.   At least, I'll think about forgiving her...  maybe.

Posted by Seville at Nerissa's Life at 11:12