you are what you eat

Now that's kind of a silly statement, don't you think?  I eat all sorts of stuff.  I eat turkey and chicken and tuna and...  well...  the list goes on and on.  But do you know what?  I'm still a cat.  I mean, even though I eat turkey for breakfast most mornings, I've never turned into one.  Never, in my whole life have I ever said, "gobble, gobble, gobble..."  Well, sometimes I do say gobbley-goop - mainly when I'm talkin' about something that ol' peep of mine has said - but that's a totally different kind of gobble, I think.  So you see...  I'm really not what I eat.

But eating right, is important.  Everyone says so.  They can't all be wrong.  Right?  Cat nutrition is of the utmost importance.

I'm a cat and that makes me a carnivore.  Sometimes peeps say they're carnivores but that's not really true.  Peeps are never carnivores.  In fact, I think tryin' to be one might even make them sick.  Most peeps are omnivores but my purrsonal peeps are veggies.  Neither one of 'em ever eats meat.

So you see, my peeps have to rely totally upon tins and bags and pouches and whatnot to supply me with my dietary requirements.  The only meat in the house is for us cats and it comes from the pet food aisle at the grocery store.  At least that's what I've been told.  I've never actually been inside the grocery store, myself.  Don't know why.  I'd make an excellent customer for sure.

I live with eleven other cats and the twelve of us all have various likes and dislikes.  We all enjoy the soft stuff for brekkies and dinner but quite often we'll snack on dry in between meals.  I always have turkey for brekkie but I really enjoy a little chicken.  Salmon is a favourite with some of my sibs.  Not one of us likes trout or duck.  Nope.  Not a single one.  And my brother Rushy will eat pretty much anything 'cept for the aforementioned trout and duck.  Peeps say this makes him a good eater.  I say it's just 'cause he's a big boy and likes his food!  Who knows...  maybe they're one in the same. 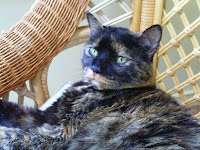 But whether we like chicken or salmon or even that duck stuff, what's important to remember is that we cats are really and truly carnivores.  That's a super-duper important part of cat nutrition.  That makes us different from peeps.  We have different biologies, I think.  We cats need our protein.  And we need lots of calcium, too, I've heard.  Very important for us cats, you know.  That's why my peeps always, always, ALWAYS give us food that's specially formulated for cats.  Bet you didn't know a cat would know such a long word as formulated, huh?  Well, I do.  I know lots of things like...  hmmm....  well like, how important it is that peeps feed us cat food and not dog or bird or hamster food or something like that.  No sirree...  cat food is the only way to go for us cats!

But did you know that almost as important as nutrition is taste?  I've known this all my life, I think.  Taste is really important 'cause if the food doesn't taste good, we cats won't eat it.  Sure, I've heard peeps - never mine, of course! - say stuff like, "Oh, they'll eat it if they're hungry enough!" but you know...  we cats could teach peeps a thing or two about holding out.  Truth is, when a cat doesn't wanna eat something, a cat won't eat that something.  It's just the way we are.  When we need it, we have patience in spades...  and hearts and diamonds and whatnot.

And just what good is nutritious food if the cats of the house won't eat it?  That's not gonna work at all.

Not that long ago, my Auntie Primrose wasn't feeling very well.  She didn't want to eat anything and the peeps were super worried.  When my peeps worry 'bout us cats, they worry like you've never seen worry before.  They were tryin' to entice Primrose to eat with all sorts of stuff.  They were even goin' to go to the store and get her chicken breast from the peep counter instead of our regular aisle.  They thought she might eat that.

But as luck would have, just about this time, I was in the process of doin' some research for this very blog post.  Yeah, the one you're readin' right now.  And sitting on the kitchen counter was a big bag filled with little trays of the most wonderful things.  There was tender beef and some chicken and salmon and whitefish with tuna and even one with turkey & giblets.  I told my peeps they should try givin' my Auntie Primrose some of the stuff they bought for my research and my peeps agreed that this was an excellent idea. 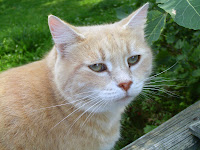 And do you know what?  She loved it!  Yup.  Especially that whitefish & tuna tray.  Auntie Prim said it was yummy, yummy in her tummy.  And that's exactly where it was 'cause she ate it all.  That plate was licked so clean it didn't even need washin' although the peeps did wash it, anyway.  Silly peeps.

You know, if any of you cats out there are havin' a hard time deciding what your peeps should be gettin' you for dinner....  you could try lookin' here.  http://www.whiskas.com/meal_time/   I know this stuff sure did help my Auntie Primrose 'cause, like I said, it got her eating again.  My friends, taste is extremely important.  Nutrition means nothin' less you can get it your tummy.  Know what I mean?

Please note that although I will receive remuneration for the writin' of this post, all thoughts expressed in it are mine.  All mine.  Not even the peep's.  No sirree....  I write my own blog, I do.  Nobody - and I mean nobody - tells me how I should think or what I should write.  I speak my own mind...  my mind.  Or, in this case, I write it!  purrs