there were pieces left over!

So a while back, the peep got this little barbecue thing-a-ma-gig.  Just a little one to grill up an occasional veggie burger or portabello mushroom, she said.  She also got some charcoal and lighter fluid 'cause she said those would be necessary to do the cookin'.  Then she put everything away in the garage and pretty much forgot all about it.  You know peeps.

A couple of weeks ago, said barbecue was hauled out of the garage.  I was a little skeptical, at first, 'cause the barbecue grill thing came in a box.  Now boxes, as we all know, are inherently good.  I love a good box, myself.  But I thought to myself, that box isn't as big as the barbecue is supposed to be.  What's up with that?

So the peep empties out the box and I see a whole lot of little bits of stuff, here and there.   Pieces of black metal, pieces of silver metal, a chunk of wood that's supposed to be a handle and a bag filled with nuts and screws and whatnot.  From what I could observe, none of it was attached to anything else.  It was all in pieces. 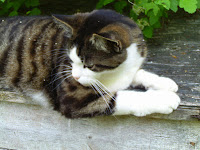 The peep settled down on the family room floor with all the little pieces of things strewn around her.  She reached for a piece of paper that came with the box and proceeded to study it.  Of course, I hopped up onto the coffee table and peered at the paper from over her shoulder.  The first thing I saw were the words, "EXPLODED VIEW."  Oh my gosh...  exploded?  Uhhh...  are we sure this is an appropriate choice of words when we've got a technologically impaired duffer of a peep trying to put together a whole bunch of bits and pieces with the intent to fill it with flammable materials to grill up a veggie burger?  I'm thinking....  NO! 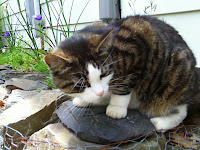 The peep is like me.  We writer-types like our words.  So this exploded view of a diagram thingy just isn't for the likes of us.  I mean, hey Mr Chefs at Master Chef...  this peep of mine isn't a mastermind, you know?  Exactly what part of technologically impaired duffer is it that you don't understand?  'Cause believe-you-me, a technologically impaired duffer of a peep is exactly what I've got on my paws.

Eventually, what looked like the barbecue in the picture on the box was standing in the middle of my family room.  But lying on the floor next to this barbecue, were some screws and nuts and stuff.  Apparently, after assembling the grill, there were pieces left over.  Hmmm....

I gave that ol' peep o' mine my most skeptical of looks complete with a quizzical ear pose and everything.  I raised one eyebrow - you know, those whiskers up above my eyes - and said to her, "You sure there are supposed to be pieces left over?"

The peep says, it's okay.  She says, everything will be fine.  I say, stand back.  Stand back and prepare to run.  Prepare to run very fast.  Very, very fast.  As fast as your little paws will take you, my friends.  Remember, there were pieces left over! 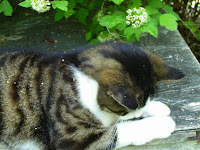 You know, it would be one thing if the peep had been putting together a table or something.  I've heard those sometimes come in boxes, too.  In fact, my television stand came in a box.  It was a really heavy box and too narrow for a cat to get into and be comfy or anything so rather useless in the most important of ways but I digress...  My point is that when the peep put together the television stand, there were no pieces left over.  Nope, not a one.  Everything that came in the box was used in the process of assemblage.  And had the peep screwed up with the assemblage process - which is a reasonably high possibility - in that instance, it wouldn't have mattered that much.   She wasn't going to be cooking with it or anything.  But it seems to me, that when you're assembling something that will require flammable materials, getting that assemblage right is somewhat important.  I'm not sure that there should be any pieces left over.

Well, my friends.  Hopefully the peep won't be doing a whole lot of grilling with this barbecue thingy of hers 'cause...  well...  did I happen to mention that...  you know...  THERE WERE PIECES LEFT OVER!