spell check and whatnot

You know, I do use the spell check provided by Blogger before I publish my posts.  I have found however, that there are a lot of missing words in it.  Many of the wondrous words that I have invented are not yet there.  I'm sure they will be, some day.  I mean...  they're good words.  It's only a matter of time before everyone is using them.  I use them all the time...  'cause like I said...  they're good!

I have come to the conclusion however, that waiting for my wordy inventions will require patience on my part.  It'll take the peeps at Blogger a little while to catch up with what's hip an' happenin' in the the twenty-first century, I think.  Languages evolve and I, Nerissa the cat, am helpin' with the evolution.  But evolution is a slow moving train.  Thus, the required patience.   Patience is a virtue, you know.  And as a cat, I have the necessary patience.  Or do I have patients?  Hehehe...  well...  occasionally a claw or two might slip and a peep might become one.  It has been known to happen, I'm afraid. 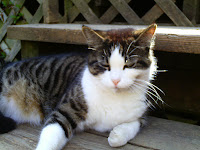 Now you see, that is something for which these spell check thing-a-ma-gigs don't account.  Those words that sound alike but are spelled - or as they say in the UK, spelt - differently and mean totally different things.  Now technically, patience and patients do not sound exactly alike.  There are auditory differences unless, of course, you're dealing with a peep who doesn't enunciate.  Bet you didn't know that a cat like me would know the word enunciate, huh?  Well I do.  Just like I know that patients in a waiting room will likely require patience.