Stan is your man! 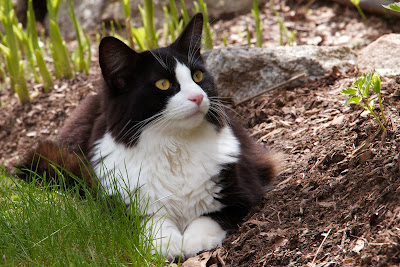 Have you heard?  HAVE YOU HEARD???  Municipal elections are on the horizon in Nova Scotia and the big news is...  one of the mayoralty candidates for HRM is a cat.  That's right...   A CAT!!!  Yes, folks...  we cats are one step closer to taking over the world.  Shhh...  don't tell anyone 'bout that.  The whole world domination thing is still a bit of a secret, okay?

Now, let me introduce you to the candidate with the mostest...  the dapper and debonair Tuxedo Stan!!!  Stan is representing the Tuxedo Party of Canada in the upcoming municipal elections.  What a guy!  Always dressed up to the nines.  Yes, each and every one of his nine lives is dressed.  Just look at that suit!  Hmmm...  I wonder who his tailor is.

...  It all began on a dark and dreary...  ah, who am I kidding.  It was a Saturday.  I don't know what the weather was like.  It was May 29th of the year 2010 but I don't know what time.  Stan didn't tell me.  That day, an abandoned, pregnant mama kitty went into labour at the Atlantic Cat Hospital.  Little did she know that one of her four baby boys would rise to such fame, just a short two years later.

There were big plans looming ahead in Stan's future.  In the spring of 2012, he was approached by the Tuxedo Party executive and asked if he would run for mayor of the City of HRM.  Now, if you've never heard of HRM before, it used to be called Halifax.  Halifax and Dartmouth and I'm not quite sure what else, all amalgamated and became what is now known as the Halifax Regional Municipality.  Hmmm....  HRM could also stand for His Royal Majesty.  Very fitting for Stan, I should think.  But I digress...

It is unclear as to whether or not one of Stan's credentials for candidacy was his tuxedo suit but I do believe Stan wishes to represent all cats, tuxedo or otherwise.  Speaking as a tabby cat, I think Stan would treat me as his equal.  Plus, I have an in.  My mama was a tuxedo.

The Tuxedo Party is a movement of grave importance.  There are so very many homeless kitties in HRM...  so very, very many.  It's not right that this issue has been ignored for so long.  The Tuxedo Party is getting the word out to the world about these poor, unfortunate babies.  As they say, "neglect isn't working" and neglect is pretty much what the powers-that-be in HRM have been doing 'bout this issue for a very long time.  The Tuxedo Party's mandate is to "increase awareness of the plight of stray, feral and indigent cats as well as raise sorely needed funds for a local animal charity called Spay Day HRM."  That's a pretty good mandate, I think.  Better than anything I've heard any other political parties come up with.  Don't you agree?

When elected, Stan wants to "fund a spay/neuter program" as apparently, "there's far too much indiscriminate sex going on in HRM."  A program of this kind would help reduce the number of feral kitties born in the city, of course, but Stan believes it could do much, much more.  There has been an increase of violence in HRM, as of late.  Pick up a paper, turn on the news...  it's everywhere.  But as Stan says, "studies have shown neutering tomcats decreases their aggressiveness" and he "can't see why it wouldn't work for humans," too.  I must say, I agree. 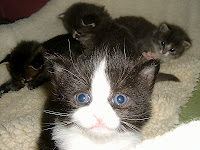 Since his campaign began, Stan's fame has been growing exponentially.  He has been interviewed or talked about by so many people.  Frank Magazine, The Chronicle Herald, CBC, ATV, CTV...  they're all wanting to do stories on my friend, Stan.  He made an appearance on the award-winning show This Hour has 22 Minutes and even my purrsonal hero, Anderson Cooper, has reported about Tuxedo Stan.  Of course, Stan left the best for last.  Thus, my post about him here on Nerissa's Life.

I wouldn't be at all surprised if Stan has the other candidates running scared.  Did you know that he was initially invited to participate in the mayoral debate and then...  ever so rudely...  UNinvited?  He was snubbed, for sure.  But Stan has a proposal for those scaredy-cat candidates who aren't really cats at all.  He suggests they "withdraw from (the) race."  He says, "there's no shame in surrender in the face of overwhelming defeat."  And do you know what?  Stan's right.  He's way cuter than any of those other candidates.  Way cuter...  Probably why he was uninvited from that debate thingy.

But politics can be dirty.  There's a "rumour going around Facebook that he's been fathering kittens in HRM."  Now who started that?  Dogs?  Anyway, it's not true.  I have it on good authority that Tuxedo Stan has been "neutered.  His grandfather, however - Tuxedo Studley - may still be at large." 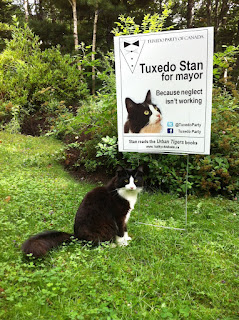 Every day, kittens are born in HRM to mamas without homes or peeps.  The vast majority of these babies will not be as lucky as my friend, Stan.  They won't rise to fame as he has.  Their future holds a life of misery, pain, fear, hunger and neglect.  For them, every day will prove a constant struggle to find a morsel of food to fill their constantly empty tummies and evade the cruelty of those out there who would think nothing of doing them harm.  And if they get sick, who will help them?  Who will doctor their wounds and mend their broken hearts?   The life of a feral kitty is a cruel one, indeed.

A very wise man once said something to the effect that society would be judged by how it treats the animals.  Well folks, those animals are us cats.  So if the people of HRM want to be judged well, it would be in their favour to do a better job of helping the feral kitties within their borders.  Take a good look at the platform of the Tuxedo Party.  You'll like what you see.  I just know you will.  And what you'll see is that Stan really is your man.

VOTE FOR TUXEDO STAN FOR MAYOR!  'CAUSE IT'S THE RIGHT THING TO DO.