windows to the world 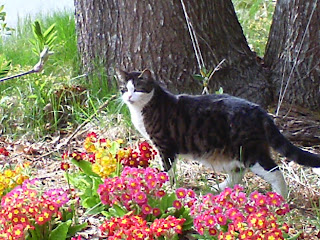 Windows.  Windows are such wonderful things.  For indoor kitties windows are, quite literally, their window to the world.  A vantage point, from which to see the great outdoors, filled with birdies and butterflies and whatnot.  From a good perch inside, indoor kitties can look out their windows and see wonderful, MARVELLOUS critters of all sorts.  I, myself, have been known to watch a little Bird TV.  You've heard of the Crow Show which appears daily in my backyard?

I am not strictly an indoor cat.  I have a house and all and I always sleep inside at night - something which a sibling or two of mine have been known to do otherwise but I won't name names...  at least not today.  But I digress. My point is, I go outside, too.  After all, I was a feral kitty so I was born outside.  But even though I go outside, I still have a wonderful appreciation of what are called windows.

It's amazing what we can see through windows.  Quite often, I'll sit at a window and watch the world go by outside.  From the big window in the peep's office, I can see all sorts of worldly things pass by.  Every day, I see birds fly by, peeps walk by and cars drive by.  They all seem to have places to go...  things to do...  stuff like that.

My peeps aren't that good about keeping my windows all sparkly clean.  Normally, I would object to such incompetence but in the case of windows, it can be beneficial.  Yes, a not-so-perfectly-clean window hides those of who are watching from behind the scenes.  In times like these, the watchees don't know the watchers are watching.

Many of you will remember about the man in the hat?  You know, the one with big old branch?  Well, he was not the last to fall victim to my watching.  Let me tell you about what happened the other day.

So, I'm sitting at the computer working on my blog when I sense something is amiss.  I look up and out through the window and what do I see?  No, not the man in the hat with another branch but rather, another person.  A totally different one.  This one was female.  She had no branch however, she did have two dogs in tow.  I've never seen this one before...  or her dogs...  little yapper types.  I thought to myself, what's this now?

Well, the woman with the yappers starts coming down my driveway.  She had a very determined walk and looked like she was coming to my front door and I hoped to goodness the peep would go answer 'cause really, I was busy working on my blog - don't like a lot of disruptions, you know - but a few feet in she stopped, turned and stared.  Yes...  stared.  She was staring at my primroses in my primrose garden.  Hmmph!  Then, as abruptly as she arrived, she turned and left!  Actually, she looked a little huffy.  I could be wrong but...  no...  she definitely looked huffy.  Don't know why.  It's not like she knew I was watching her or anything.

You know, I'm not sure how I feel about this.  That's my garden...  my private space...  I already HAVE to share it with eleven other cats and two peeps!  Isn't that enough?  Am I expected to share it with the whole world?  And their yappers, too?  The peep says I should be pleased that the woman with the yappers was admiring my garden.  She says it's a compliment.  I say, she should have asked.  She could have asked.  She didn't ask.  I think she should have.  Hmmph!  PEEPS!

Posted by Seville at Nerissa's Life at 09:58