Yesterday was a very special day at our house.  My Aunties Blossom, Primrose and Snowdrop all celebrated their fifteenth - yeah, I said fifteenth - birthday.  WOW!  Fifteen years old.  INCREDIBLE!  They look really good for their age, too.  Not a grey hair in sight.  Unlike the peep... 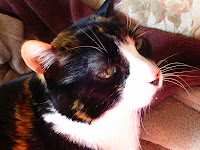 Fifteen years ago yesterday, my aunties were born...  in a closet, in Nova Scotia.  But what makes this is even more amazing is that my aunties' mama wasn't Nova Scotian.  She wasn't even Canadian.  Nope!  She was a landed immigrant, originally from Venezuela.  Here's the story...

The peeps - I should mention that they weren't known as peeps way back then as I, Nerissa the cat, came up with that moniker for them - were on vacation for two weeks in a country far, far away...  on a whole other continent in a whole other hemisphere.  That would be the country known as Venezuela.  The very first night they were there, a little black and white kitty showed up at the door to their villa.  There were lots of kitties on the resort and many of them were thin and hungry.  The peeps wanted to help them all - of course! - but one can only do so much, right?  As this little girl came to the peeps, the peeps thought they had better help her in particular. 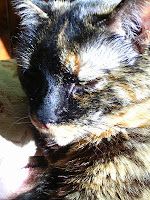 The restaurants on the resort were all closed for the night so peep #1 headed down the beach, money in hand.  A little while later, she returned to the villa with a chicken sandwich...  no condiments or lettuce or anything silly like that...  just chicken and bread.  The little black and white kitty was ravenous and ate the meat all up.  From then on in, she remembered two things...  the mini refrigerator and the peeps.  Or maybe that's three things...  'cause there are two peeps.

The peeps began to call the little black and white kitty Alicia.  She would stay close to the villa every day and spend the nights inside, asleep on one of their beds.  The peeps tried very hard not to let the resort staff know what was going on but by the end of their two week stay, EVERYBODY knew.  Couldn't be helped, I guess.

The peeps went to visit a special man in the city.  A minister of some sort.  Not the religious kind.  This was a government official.   He filled out a form allowing Alicia to leave the country.  Alicia was taken by taxi to a doctor who gave her the vaccinations she would need to enter Canada.  The doctor's name was Jesus.  Dr. Jesus...  I like that.  A carrier was purchased as was a ticket for a trip on an airplane.  It wasn't the plane my peeps were on 'cause that stupid metal bird wouldn't allow cats but it was another plane that left for Canada the very same day the peeps did.

Alicia spent a weekend in Toronto and then flew to Halifax where peep #2 picked her up, Monday morning.  A month later, on the 31st of March 1997, my aunties were born.  Snowdrop & Primrose were tortie and Blossom & Sweet Pea were calico.  Sweet Pea went to live with a very special friend of peep #1's.  There was no one else good enough to have any of the other kittens so that's why I've got three aunties livin' here with me.  Auntie Sweet Pea now goes by the name of Sarah but I'm sure she still remembers her sisters.

Anyway...  that's the story of my aunties.  There are many, many more stories of them to tell and someday soon, I'll get around to those on my blog. 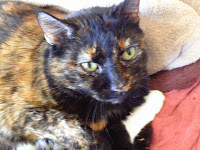 In the meantime, I just want to wish them all a very happy fifteenth birthday.  They had a great day.  There were treat temptations and fancy feast and cream and even a special packet of chicken breast from the grocery store...  my aunties' favourite.  We all had some.  Yum.  Ooh...  it really was extra delicious.

HAPPY BIRTHDAY AUNTIES!  You're four in a million!