I first noticed it looking out the kitchen window.  So I hopped up onto a window ledge in the family room to look out.  It was there, too.  Then I got peep #1 to open the back door where I saw even more of it.  Thinking that just maybe there was a possibility it wouldn't be at the front door, I had my peep check there too but alas, there it was...  white stuff!  White stuff all over my yard in which I like to play...  all over my garden in which I like to dig...  and all over my grass upon which I like to munch.  Humph! 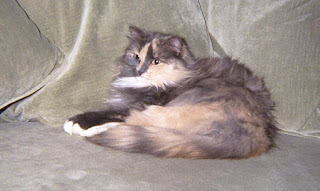 Snow has it's attributes, I suppose.  It kind of looks pretty out there...  everything is all clean and white.   But it won't take long before some dog comes along and pees on it.  Life lesson #1...  NEVER EAT YELLOW SNOW.

Snowflakes are fun to chase.  It's not really cold out today so I might spend an hour or so this afternoon chasin' flakes.  I like to catch them on my nose and stare at them until I'm cross-eyed or they melt or whichever comes first.  FUN!  Eventually though, the snow gets too deep.  I can handle it up to my elbows.  Any higher than that and the walking gets pretty tricky.  That's when I tell my peeps to get out there and do their bit with the snow shovels.  Paths must be made for us cats.

My sister Tess - that's her in the above photo - hates the white stuff.  She has fine, long hair and the snow sticks to it in clumps.  Little goopies of snow hang down from her fur which look kind of weird and she doesn't like that.  Who would?  I've heard her growling at snow many a time.  I heard her growling at it today.  She growled at the front door, at the back door and at the kitchen window.  And those were just the times I heard.  There may have been more.  You've heard of peeps waking up on the wrong side of the bed?  Well, let me tell you that this morning?  ...Tess woke up on the wrong side of the snowline.
Posted by Seville at Nerissa's Life at 17:03