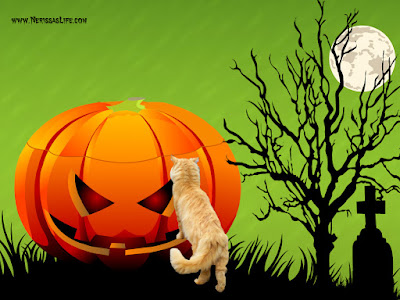 "MAKE UP YOUR MOUSING MIND, SIVVERS!  This carved pumpkin is really heavy."

"Yeah," Seville grinned, "but it's super spooky lookin', too.  We are SO GONNA WIN the neighbourhood Hallowe'en decoratin' contest this year.  No one - AND I MEAN NO ONE - has anythin' as good as this in their yard."

"Probably because no one around here is able to push these big jack o'lanterns around," puffed Andy.  "Honestly and truly, Seville, it's REALLY heavy.  Could you at least give me a paw?"

Seville thought for a bit.  "If I'm helpin' with the movin', I won't be able to direct.  Now push that thing another foot...  I mean, paw, over to your left.  MOUSES!"

"Whew!"  Andy sat back on his haunches after giving the pumpkin one final shove.  "Do you think that looks like it's in the right spot, now?"

Seville gave the pumpkin an appraising nod.  "Yup, looks just about PURRfect to me.  Now for the next one."

"NEXT one!  How many of these pumpkins do you have?"

"Just a dozen or so."  Seville held up a paw, "And before you start complainin', I'M the one who had to carve 'em all.  I asked the peep for help but she was busy doin' somethin' in the kitchen.  Somethin' stupid, would be my guess.  You know, basic stupid stuff peeps do."

At that moment, a black van came racing down the street and screeched to a halt in front of the cats' house.  Both front doors flew open and out popped two weaselly looking characters.  They approached Seville; the one in the lead holding a clipboard.  "May I speak to the gentleman of the house?" he asked.

Furrowing his brow, Seville replied, "That would be me.  What do you want?"

Vigorously shaking Seville's paw with both of his, he answered, "Wilton Weston Weasel from Shakers and Movers Moving - a subsidiary company, wholly owned and operated by the Weasel Syndicate - at your service."  Having finished his spiel, he bowed with a flourish.  "I understand you're in need of a moving company."

"Shakers and Movers?" Seville questioned.  "What kinda stupid name is that for a movin' company?  You shake up all the boxes of stuff you move?"

"When required, yes," the weasel replied.  "You'd be surprised how many peeps out there require a good shaking up when moving."

"That's the stupidest thing I've ever heard," Seville told him, "and believe you me, I've heard some pretty stupid stuff.  You've met my brother, haven't you?"  Seville pointed to Andy.

"HEY!" Andy yelled.  "There's no need to insult the fur-sibs."  He extended a paw to the moving company weasel.  "But since you're here, YES.  Yes, we definitely require your services.   My brother has like a dozen of these enormous jack o'lanterns needing to be moved about before the neighbourhood Hallowe'en decorating contest judging begins."

"What the mouses is this?" asked Seville. 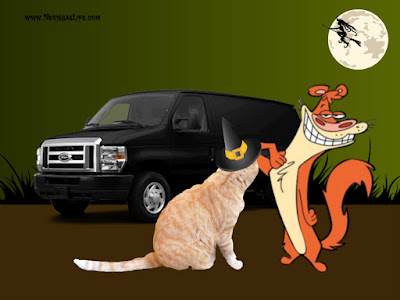 Andy thrust a piece of plastic into the weasel's paw.  "Use this."

"Andy!" and Seville hauled his brother back.  "We can't pay out that kinda money.  The peep will absolutely freak."

Anderson narrowed his eyes.  "Well I'm not moving any more of your silly orange pumpkins around the yard on my own, Seville.  They're way too heavy.  These weasels specialise in moving things about."

"More like they specialise in shakin' things up," Seville said, gritting his teeth.  "Didn't you hear what he said about the shakin'?"

Andy pressed his lips together, adamantly.

"FINE.  But YOU'RE gonna have to explain the bill to the peep.  MOUSES!" and Seville started drawing a garden plan so that the weasels would know exactly where to place the pumpkins.  Looking up, he said, "I need these moved within the hour.  Judging starts at noon."

The weasel nodded sharply.  Blowing on the whistle that had been hanging around his neck, the van's back door popped open and out popped...

Yes, you heard that correctly.

Out POPPED the weasels.  Five of them, to be exact.  Seville shook his head in disgust and gave Andy a dirty look.  Paying no attention to his brother's irritation, Andy shrugged his shoulders and lay down for a little nap.

At five minutes to twelve, Seville sauntered out of the house to check on the weasels' progress, carrying a large niptini and a pawful of snacks.  "Oohhhh..  This is gonna be good," he grinned.  "We are SO GONNA WIN..."  Stopping in his tracks, he looked around the front yard in dismay, ignoring the sound of glass shattering as he dropped his niptini on the brick pathway.

"But each and every one has been shaken," sneered the head weasel.  Thrusting an official looking piece of paper in Seville's face he added, "See?  Right here.  The contact states that...  Hmmm...  Yes, here...  Pumpkins.  Shaken.  Moving not required."

"BUT YOU'RE SUPPOSED TO BE A MOVIN' COMPANY!" Seville wailed.

"Your brother signed," and the weasel's smile became malevolent, "right there on the dotted line.  See?"

Seville snatched the contract out of the weasel's hand.  "ANDY!!!"

Andy woke with a start.  "You looking for me, Sivvers?"

Seville growled.  Turning back to the weasel he said, "I don't care what Andy did or did not sign.  You're gonna get these pumpkins moved into place, and you're gonna get 'em moved, NOW.  MOUSES!"

Just then, a trio of well-dressed peeps came walking down the path leading to Seville's front door.  The female peep looked about the yard, tsking and muttering about the mess.  The two male peeps whispered to one another, questioning whether or not they had the right address.  "They appear to be completely unprepared," Seville heard one of them say.

"But..."  Seville began.  "WAIT!  Please wait, your royal...  Honoured?  Yes, your HONOURED judges.  PLEASE wait.  Pretty please?  Pretty please with nip on top?  We've met up with a slight, UNEXPECTED snafu, you see."  He watched as the female peep lifted one foot to find pumpkin seeds and guts dripping from her shoe.

"Here, let me fix that," and Seville grabbed hold of Andy's tail, using it to wipe the pumpkin guts off the shoe.  "I must have missed those when I cleaned up..."

The female peep raised an eyebrow.  "This has been cleaned up?" she questioned.  "What did it look like BEFORE?" 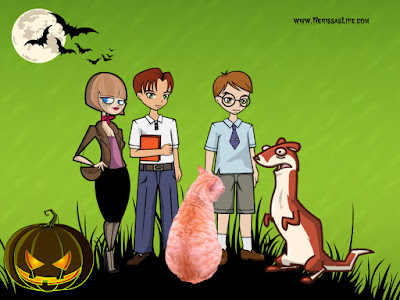 The head weasel stepped between Seville and the three judges.  "Wilton Weston Weasel from Shakers and Movers Moving - a subsidiary company, wholly owned and operated by the Weasel Syndicate - at your service," he said, thrusting out one hand.  "I assume you've already been to the house down the street?  The house owned by Wesley Weston?  MY BROTHER?" and he glanced over at Seville, sneering.

"Ah yes," answered one of the male judges.  "And a VERY FINE decorating job that was.  EXCELLENT work, unlike..." and he looked about Seville's yard.

Seville sat back on his haunches and let out a loud sigh.

"SEVILLE!" someone hollered with a piercing shriek.  Flinging open the front door, Peep #1 stood there and yelled once more.  "SEVILLE!  What have you done with the pumpkin I left on the kitchen counter?  I'm in the middle of baking..."

Peep #1 stopped short at the sight of the three judges.  She stood there, her apron askew and covered with flour, her hair half in and half out of its pony tail, and bits of pastry stuck to her clothing and face.  "Oh, hello..." and she held out a hand.  A bit of egg shell that had been sticking to her palm fell to the ground.

"ARRRRRGGGGGGHHHHHHHHHHH!!!!!!!!!!!!!!!!" the judges screamed in unison.  "IT'S FRANKENSTEIN'S WIFE!!!"  Turning on their heels, they ran as fast as they could, away from Seville and Peep #1.  And off in the distance Seville could hear, "YOU WIN, Seville the Cat.  That's the scariest sight anyone has ever seen."

With their plot to win the neighbourhood Hallowe'en decorating contest foiled, the weasels slumped their shoulders and slowly shuffled off to their van.  "Maybe next year," one of them sighed.  "Who knew we'd ever have to compete with a sight as scary as that?"  The other weasels all visibly shuddered.  And before turning to head indoors, Seville waved goodbye to the weasels, and cried... 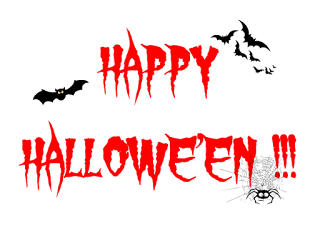