I wrinkled my nose and made a face.  "Not what I meant, Bro.  MOUSES!"

Andy looked perplexed.  "Then what did you mean?" he asked me.

"I meant, it's gonna hurt when Mason gets you back.  'Cause you KNOW she's gonna.  Oh yeah, she's gonna get you back for givin' her the smacky-paw, for sure.  MOUSES!"

I could see the beginnings of realisation dawn on Anderson's face.

"There's a REASON we boys don't smacky-paw our sister, Andy, and that reason is..."

"...'cause Mason is the Queen of the Smacky-Paws, herself," Andy cringed.

"Yup," I nodded.  "You smacky-paw Mason, she smacky-paws you back.  Usually adds a few extra smacks just for good measure, too."

Andy rubbed his jaw, already wincin' in anticipation of bein' smacky-pawed by his sister.  "Why do you suppose she didn't smack me right there and then?"

"Well..."  and I considered Andy's question, carefully.  "You might have taken her by surprise," I answered.  "It's been a long time since any one of us boys was so foolish as to smack our sister.  I can't even remember the last time I gave her a smack.  Probably years.  She might be so used to no one bein' that foolish that she momentarily forgot how to respond."

"On the other paw," I continued.  "She might also be waiting 'til you least expect her to smack you back.  Lettin' the suspense and worry build up in the meantime."  I nodded to myself.  "Yeah, that's just the kinda thing our sister would do."

"I'm sayin', one moment you're gonna be happily mindin' your own business doin' whatever business you do, and the next moment, Mason is gonna come up behind you and smacky-paw you from here to Timbuktu.  MOUSES!"

"Nobody really knows," I said in a very low voice.  "No one sent there has ever returned."

"Awww...  I'm just joshin' with you, Bro.  Timbuktu isn't a place anyone goes to these days.  Mason can't actually smacky-paw you there.  There are no direct flights, you see.  BUT SHE WILL SMACKY-PAW YOU, you can count on that.  And it's gonna hurt, too.  Believe me, I know."

"But I thought you said you hadn't smacky-pawed Mason in years.  How can you remember how it felt when she smacky-pawed you back?"

"Mason has smacky-pawed me for OTHER reasons, unfortunately," and I let out a loud sigh.  "Most recently, she smacked me for uh...  Hmmm...  HMMM...  You know somehin', Andy?  I think the last time she smacky-pawed me, it might have been just for fun.  MOUSES!"

"She can do that?" Andy asked.

"Oh sure.  Mason can do just about anythin' she likes.  And don't bother tellin' on her, either.  Even if you get the peeps to question her, she'll just give 'em that look of innocence of hers, denying doin' anythin' wrong, and the next thing you know, YOU're bein' told not to bother your sister.  Believe me, I know.  MOUSES!"

By this time, Anderson was lookin' super scared.  More scared than I had ever seen him look before.

"Come to think of it, I think callin' her a curvy gal might be why she last gave me a smacky-paw.  MOUSES!"

"Anyway," I continued, "like I was sayin', don't try to outrun her.  Best way to avoid Mason's paw is to outrun whoever else is in the room.  Either outrun 'em, or stand right behind 'em, givin' her someone else to smack."

I looked 'round the corner of the kitchen and into the family room.  There was Mason, sittin' on the chesterfield and holdin' up one of her front paws.  One by one, she extended a claw, breathed on it first, then polished it on her chest furs.  Once done, she hopped down from the couch and with determination, headed toward the kitchen.

"Andy, lesson one," I said, before makin' my way behind my brother, so as to place Andy between Mason and myself, when she entered the room.

Moments later, Mason turned the corner and spotted Andy.  Glaring at him, she crouched.  The next thing I knew, my sister was flyin' through the air with Anderson in her sights.  Andy stood there, his paws frozen to the ground. 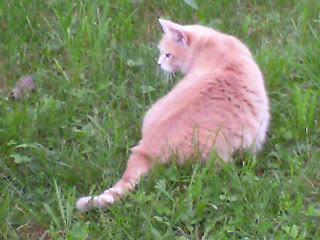 When the dust settled, Mason was back on the chesterfield, and Andy was lickin' his wounds, smoothin' out his long fur where Mason had made it look all dishevelled and stuff.

"Not too bad.  She got me where my fur is extra thick."

"Yeah," I nodded.  "She's all into justice, that sister of ours, but she's not actually mean.  But best not to upset her again.  MOUSES!"