stupid is as stupid does

Stupid is as stupid does.

And do you know what? You'd be right about that, for sure.  MOUSES!

Picture it.  My house. Yesterday mornin'.

And then there was silence.

Okay, so the peep didn't actually use the word, "MOUSES!" but as this here is a family-friendly blog, I've done a little editin' on behalf of the peep.

Actually, if I'm bein' honest, what she yelled wasn't really a word at all.  It was kind of a...  Well... Well kind of a really loud, unintelligible, blood-curdling, wakin' of the dead, kinda scream.

But I'm pretty sure what she wanted to yell was "MOUSES!" or somethin' similar, but totally unsuitable to appear in print form, on my blog.

So anyway, that's what I heard comin' from the kitchen, yesterday mornin'.

From what I've been told, Dionysus - the timeshare cat - was in the kitchen waitin' for his breakkies, when Nosy-Neighbour-Cat appeared at the kitchen window.  Well Peep #1, bein' the stupid...  I mean, soft-hearted imbecile that she is...

What?  What's that, Peepers?  WHAT?  Callin' you a "soft-hearted imbecile" isn't any better than callin' you "stupid," you say?

So anyway, Peep #1, bein' the super stupid peep that she is, felt sorry for Nosy-Neighbour-Cat, and opened the kitchen window to let him in.

Now at this point, I should just mention how Dionysus and Nosy-Neighbour Cat don't really get along.

Well I guess Dionysus - the timeshare cat - wasn't too pleased with the peep lettin' Nosy-Neighbour-Cat inside, which is why he started to stalk him.  And that stalkin' was why the peep was tellin' him not to chase the neighbours' cat.

Now the peep, bein' a peep, figured Dionysus would listen to whatever she was sayin', and obey her. She figured, he'd stop what he was doin', sit down like a good little boy, and not chase Nosy-Neighbour-Cat after all.  You know, just 'cause she told him not to. 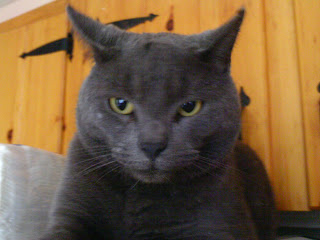 Moments later, Dionysus was flyin' through the air, and there was black and dark grey fur flyin' all over the place.

Now one might think that lettin' Nosy-Neighbour-Cat into the house in the first place, was the most moused-up stupid thing Peep #1 did yesterday mornin'.

If ONLY Peep #1's level of stupidity were limited to that.

IT'S LIKE SHE THINKS SHE'S IN A CONTEST OR SOMETHIN'!

You know, a contest to see who is the stupidest of the stupids.

But actually, if there were a contest for that, she'd be winnin' it, for sure.  She'd be holdin' the world record.  She'd be THE ONE TO BEAT, for generations to come.  She'd...

But back to that moment after the moment of silence.

That would be 'bout the time when Peep #1 instinctively dove for Dionysus - the timeshare cat. With one fluid motion, she swept him up with her left arm, and then turned, so her back was to Nosy-Neighbour-Cat, preventin' the two cats from seein' one other.

You know, so that they would forget about fightin', and stuff like that.

For a split second, it appeared to have worked.  Everyone seemed calm.

And then the next?

Well that was when Dionysus - the timeshare cat - was SINKIN' HIS TEETH into the peep's left hand.  MOUSES!

And if you're thinkin' that that was about the same time Ol' Peepers here let out that bone-chillin' scream that could awaken the dead...  Well you'd be right about that, for sure.  MOUSES!

So anyway, the two cats are perfectly fine.  Not a scratch on either one of 'em.  Bit of loose fur, but nothin' more.

Well the peep spent most of the mornin' at the doctor's office and then later, at the pharmacy, gettin' antibiotics.

I mean, HOW MANY TIMES does she have to be bitten, to figure this stuff out?

Well like I said, STUPID IS AS STUPID DOES.

And not only that, apparently, it's forever.  MOUSES!

Posted by Seville at Nerissa's Life at 18:52