You know what they say.

They say, time flies when you're havin' fun.

But actually, sometimes, time falls when you're havin' fun, too.  Maybe they should start sayin' that.  MOUSES!

So anyway, I heard that in the wee hours of this mornin', the peeps were supposed to turn the clocks back due to that ol' daylight savings time - clock turnin' back thing, or whatever it's called.

And speakin' of daylight savings time...  Is there a special kind of savings account at the bank you're supposed to get for that? And if there is, do you get interest?  And do you get a free calendar, too? Inquirin' minds wanna know.

But back to those clocks.

Knowin' that Peep #1 would probably forget to do the little clock switcharoo, I set out to do it for her.  But which way was I supposed to be turnin' the paws on the clocks?  To be honest, I had absolutely no idea.

Then I remembered that other ol' sayin'.  Spring forward, fall back.

Well DUH.  Of course you're gonna spring forward.  I mean, if you spring backward, you're likely to fall flat on your keister, for sure.  Or in my case, fall flat on my tail.  MOUSES!

So I set about doin' what I needed to do.

But in my first turnin' back of the clocks attempt, I had a few problems turnin' the little knobby thing that moves the mantle clock's hands.  I mean, paws.  No actually, I do mean hands.  But that is neither here no there.  What is important is that when tryin' to turn that knobby thing, my claws kept slippin', and as the peep was sound asleep, I couldn't really ask her for any help.

Well actually, I could have asked but that would have required my waking her up, and I know from personal experience that a peep woken up at two in the mornin' is a very scary peep, for sure. MOUSES!

So obviously, I felt it best to persevere on my own.

But try as I might, I couldn't get that clock hand controlling knobby thing to turn.

That's when I decided to go old school.

Spring forward, fall back.  One good whacky paw to the face of the clock and it would fall back, for sure.

But then it got stuck between the sideboard and the wall behind it.

Obviously, the mantle clock had been eatin' too many treats and not exercising enough.  MOUSES!

I jumped down onto the floor and did my best to squeeze myself in behind the sideboard, only to find that I, too, had been eatin' a few more treats than perhaps I should.  MOUSES!

But Seville the Cat is not the kind of cat who lets a little thing like not fittin' into an enclosed space stop him.  No sirree.  So I reached in with a paw and gave that ol' clock another smack.  Unfortunately, the clock was bein' obstinate - as clocks will do - and refused to budge.

So I decided to turn back a different clock.

Well Peep #1's alarm clock had the same knobby control thing-a-ma-giggy issues as the mantle clock, so I didn't even bother tryin' that route, and instead immediately did a smacky paw to the clock's face.

And it fell to floor with a thud.

Moments before it started to howl.

And that would be about the time the peep woke up.  MOUSES!

I also explained that the changin' of clocks was not the kind of changin' that required diapers although truth be told, I might have...  you know...  just a little bit...  when that ol' alarm clock of the peep's started howlin' at two o'clock in the morning.  'Cause it took me by surprise and scared me a little.

What happened next, I cannot report, on account of Nerissa's Life bein' a family-friendly blog and all. MOUSES! 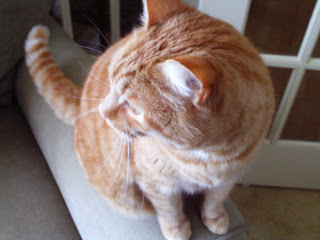 You know, you'd think that after livin' with me for all these years, the peep would be used to being awakened at two in the mornin' and an occasional lapse of litter box usage by now.

But apparently not.  MOUSES!

Bottom line is, I think we're in need of a couple new clocks.

Peep #1 says I have to come clean 'bout the mantle clock business.  That part of my story was kinda made up

Are you happy now, Peepers?

But the stuff 'bout my knockin' her alarm clock down?  That bit was as true as true can be. MOUSES!

Posted by Seville at Nerissa's Life at 16:07

Email ThisBlogThis!Share to TwitterShare to FacebookShare to Pinterest
Labels: cats, daylight savings time, humor, humour, spring forward and fall back, time, time flies when you're having fun, turn your clocks back