we have a winner!

I call heads.  HEADS! Yup, I called it.  Heads it is.  That's one million, forty-eight thousand, five hundred and seventy-six dollars you owe me, Mason.  Shall we play again?  Double or nothing?

What's that, Peepers?  I have to play fairly with my sister?  But I AM playing fairly.  Not my fault I keep calling heads and the coin keeps agreeing with me. MOUSES!

You ready to go double or nothing again, Mason.  HEADS!  Yup, I called it again.  Heads it is.  So now you owe me two million, ninety-seven thousand, one hundred and fifty-two dollars.  Maybe I should have asked this before but...  But are you sure you can cover that, Mason?  I mean, it's kind of a lot of money.  You have any collateral or whatever it's called?

Pardon me, Peepers?  Am I using a fake coin or something?  OF ALL THE...  How can you even ask me such a thing, Peepers?  I'm insulted that you would even think that I would...  MOUSES!

Okay Mason, double or nothing once more?  HEADS!  And heads it is!  Gosh I'm good at this game.  You Mason, on the other paw, are not so great.  You know, I really think I need to get you to put your paw print on an IOU or something 'cause seriously, you now owe me...  OH MY MOUSES AND HOLY SMOKERONIES!  Mason, you now owe me four million, one hundred and ninety-four thousand, three hundred and four dollars.  You really think you're good for that?

WHAT IT IS NOW, PEEPERS?  For mousin' out loud, if it isn't one thing it's another with that ol' peep of mine.

Mason, did you tell on me or something?

So apparently, or so I am told by Peep #1 although I don't know what makes her such an expert on the subject 'cause I don't think she's ever won four million, one hundred and ninety-four thousand, three hundred and four dollars in a little over an hour by simply tossing around a coin but apparently, according to her, both sides of said coin are not heads.  MOUSES! 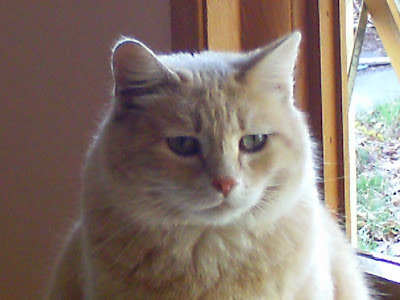 But the thing is, THEY ARE!  I mean, just look at this quarter here.  On the one side you have a picture of Her Royal Majesty, Queen Elizabeth II.  Yup, look right there. A picture of Queen Elizabeth's face.  Her face.  In other words, her head.  And on the other side of the coin, there's a picture of a deer.  Or maybe it's a moose. Something with antlers, anyway.  But the important thing 'bout it is that those antlers are attached to his...  wait for it...  HEAD.

So that's my point, really.  Both sides of the coin ARE heads and that, my friends, is for sure. MOUSES!

I mean, the deer or moose or dear little moose or whatever he is has a tail, I am sure, but is there a picture of his tail on the coin?  Of course there isn't!  No deer tails, no moose tails, no top hat and tails.  Not even a dear little moose, that might be a deer, wearing a top hat with tails.  No tails at all. So therefore, the coin clearly has no side with tails which means - obviously - both sides of the coin are heads.

Not my fault I kept calling heads before Mason had a chance to and it's certainly not my fault the coin had only heads to begin with.  Not my fault at all.  Should I say it again?  Of course I should. MOUSES!

Seems to me, I won that money fairly and squarely, for sure.

And speaking of winning...

Today is the first day of spring and she arrived wearing a bright sunny yellow hat, accompanied by a whole bunch of pretty robins.   I thought for sure Miss Spring had won out over Old Man Winter this year but you know, looks can be deceiving.  Besides the fact that it's kind of chilly for spring, I understand there's a nor'easter coming our way tomorrow.  MOUSES!

Yeah, Old Man Winter is known for his grumpiness in these here parts.  Grumpy, grumpy, grumpy. Don't know what he has to be all grumpy about.  It's not like he thought he had won a whole bunch of coin tosses with his sister only to be told by his peep that he couldn't make his sister pay up 'cause he was kind of cheating when really he wasn't because it's not his fault that his peep doesn't know a moose's head when she sees one.  MOUSES! 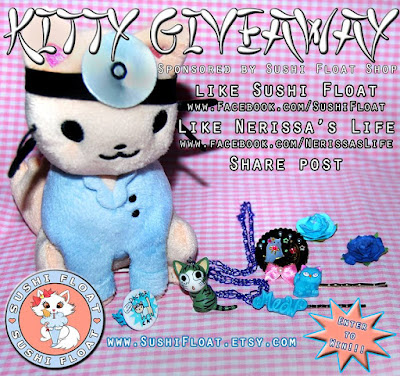 Oh, I know!  I need to tell everyone who won the great giveaway we've had going on for the last couple of weeks.  You know, the giveaway with all those beautiful and wonderful and magical kawaii, cat-themed items, sponsored by my pal Hatsummo Aries over at Sushi Float.  You know the one?  Of course you do. How could you not? MOUSES!

So without further ado.  Drum roll, please.  The winner is....

The winner is...  MODERN NOMAD!  That's right!  My pals Noodle and Modern Nomad over at the It's Noodle! blog are the winners of the giveaway.   CONGRATULATIONS!!!  I'll be contacting you this evening to get your mailing info and stuff.  Isn't that exciting?  Of course it is.  MOUSES!